The Roots – Rising Down [Review] 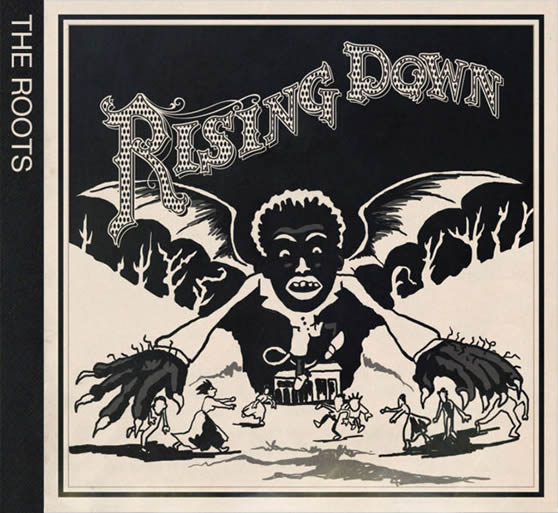 Without apologies, hesitation, or regret, I admit that I am a full out Roots fan. This review may/may not be tempered with bias. You all have read a good amount of my reviews and should know by now that I am pretty objective…I hope, cause I have given some stuff good/great ratings even while I haven’t listened to that particular album again cause it’s not my type of music. This CD however, I have been anticipating for quite a while. Let’s go.

Rising Down (Hum Drum)
Featuring Mos Def & Styles P; Produced Questlove
After the extra amped intro, the methodical beat comes on and Mos Def lets you know the dark imagery that is on his mind. Talk of Jena, conflict diamonds, and other images that cloud his mind. Black Thought ads to the content with global warming talk, environmental concerns, and pontifications on the stress of working a “JOB”. Styles P finishes off with the imagery of the hood and the state of the world in general. Those who think Hip-Hop is dead; I present to you, Rising Down. Hip-Hop is alive and well.

Get Busy
Featuring Dice Raw, Peedi Peedi, & DJ Jazzy Jeff; Produced by The Roots & RItz Reynolds
I think I just broke my damn neck. Synth, Drums, and flow, period. It’s a throwback to an earlier sound of Hip-Hop, kinda like Deep Cover or something similar. t works. Dice Raw and Peedi Peedi definitely make the most of the appearance. Peedi Peedi’s sound and cadence are just dope.

@15
Wow, Black Thought at 15? (thus the name). It’s more an interlude clockin’ in at less than a minute, but it’s an interesting look at the evidence then.

75 Bars (Black’s Reconstruction)
Produced by Questlove
No hook, no problem. While other emcees and rappers ask for loyalty for the ability to flow with no hook, Thought does it routinely. This song is probably one of my favorite songs of all time, already. ?uest destroys the drums and Thought brings unrelenting napalm to this fiery track. The video is as dope as the song. Now, I am in traction because I kept noddin’ with my already broke neck.

Criminal
Featuring Truck North & Saigon; Produced by The Roots & Khari Mateen
Mr. Mixtape, Saigon, is here with Thought over a more melodic track that still keeps it raw as hell. Saigon attacks this beat and seems to assert his feeling that he is relevant as any other emcee that gets more play than he, and ending the verse with fuck you was the !!!! to his verse. This song is a real psychological look at behavior and environment. I dig this song a lot.

I Will Not Apologize
Featuring P.O.R.N., Dice Raw, & Talib Kweli; Produced by The Roots & Richard Nichols
As an older sounding beat with synths reminiscent of The Chronic, this is a lot funkier than I would have expected to hear. Sometimes simplicity really IS the best, I dig it. The hook is something I think we should all chant at our 9-5. I cannot apologize (I will not apologize) / I will not apologize ( I will not apologize) / This for all of my peoples who understand and truly recognize / Some won’t get it and for that, I won’t apologize.

Singing Man
Featuring P.O.R.N., Dice Raw, & Truck North; Produced by The Roots & Khari Mateen
On the first few spins, I didn’t like this track. The hook seemed off, the track was annoying and that hampered my ability to listen to it, I just heard it. I am not a quitter though, and have started to like this song. When you finally get to the lyrics and message, it’s the perfect track for the song.

Unwritten
Featuring Mercedes Martinez; Produced by The Roots, Tahir Jamal, Radji Mateen, & Khari Mateen
I would have loved to hear this in with the Things Fall Apart album because it has that kind of sensibility. Oh, might I add that I would to have loved to hear it longer. It’s really more of a thought or interlude, but nice.

Lost Desire
Featuring Malik B. & Talib Kweli; The Roots & Khari Mateen
Welcome back to the heavy synth and drum and bass track. On this one, I think our rappers tried to really one up each other. This is dope emceein’. I probably would have liked a little harder track or 808 type sound to this one, but that’s really nitpicking.

The Show
Featuring Common & Dice Raw; Produced by  The Roots & Tahir Jamal
More look at the inner workings of the mind of a recording artist. Message and image trump the presentation. The hook could be a lot better, but lyrically, the song is not bad. I think both Common and Thought are at their best over more energetic tracks than this.

Rising Up
Featuring Wale & Chrisette Michelle; Produced by Questlove & James Poyser
3 words…MUSICAL AS HELL. I can’t front, I wasn’t ready for this one. It is a LOT of music. Like, you know when bands do that set where each artist gets some shine, it sounds like producers did that with the track. The drums are completely insane, the chords are all over, in a good way. The result is a great song. I would love to see this one in concert as well.

Birthday Girl (Bonus Tracke)
Featuring Patrick Stump, Shane Clark, & Kelli Scarr; Produced by The Roots, Richard Nichols, & Shane Clark
Huh? Did MTV produce a song for them? Turn Yo’ Headphones Up man. Well, this one is a little too much for the US, so may as well drop it. Chi Ali reference and all, Thought talks about deception (further evidenced by putting that message in this “happy” ass song) and the state of affairs in our twisted world as it relates to reality, and real to me.

The Grand Return (Bonus Track)
Featuring Wadud Ahmad & Dice Raw
I can easily see this performed at the beginning of a concert. Nice drum and bass track that features some of the most insane licks I’ve heard in a long while. Damn, that guitar is soul piercing.

Hidden track (Outro)
More phone convo of the band/not on US release.

Bottom Line:
I mention the Roots in concert a few times because they are simply the best (only?) Hip-Hop band out there that really puts on a show. Artistically, this album is adventurous, creative, and meticulously put together. I think Game Theory is a better album than folks give credit to and this one is the same in that respect. Over time, this album will be more and more appreciated. This is a creative expression and a monumental offering antagonistic of the hood imagery and coonery that is promoted and praised in today’s Hip-Hop/urban music scene. Simply put, I feel that the nappypicks off this album would make a better album than a majority of the releases that are out. There is more substance and Hip-Hop in the songs listed below than has been released recently (Eardrum being the exception). I credit the crew for making an album that you have to LISTEN to past what you hear. Some folks will hate the rating I gave it, but “I Will Not Apologize”.