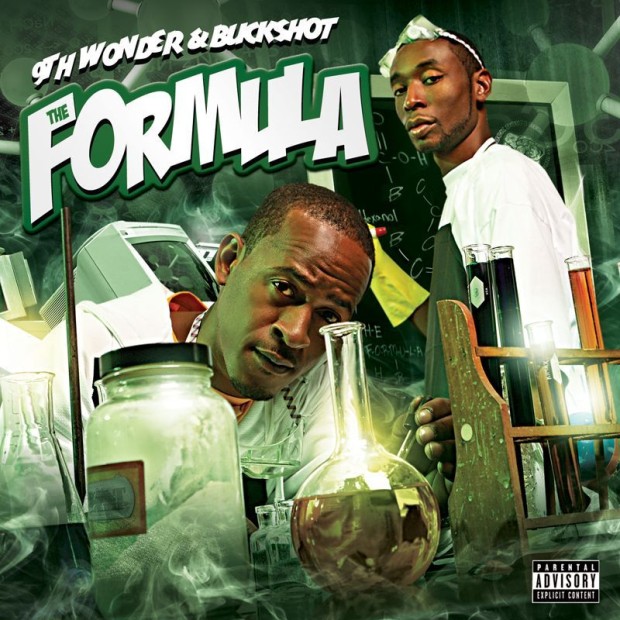 When Buckshot and 9th Wonder dropped The Chemistry in mid-2005, it brought together two parts of the eastern coast that at the time were in two very different worlds of music. Their collaboration album was praised, and it proved that hardcore content could find its place in the heart of a soul sample. Three years later, Buckshot and 9th carry over their chemistry in hopes that The Formula will be perfect this time. Just like on The Chemistry, 9th Wonder holds down full production credits, a tough task to encapsulate. Will The Formula pop off or just titillate a fizzle? Let’s find out.

Intro
Featuring The Formula Crew
Nothing hard, nothing complex, just a feel good intro to start off the album. Buckshot takes the time to explain his formula, and his “Formula Crew” pipe in to argue about their own “formula.”

Ready (Brand New Day)
This feels like it could have started the album off too. 9th Wonder brings the chipmunk (ready for a brand new dayyy!) along with his digital-belting trumpets to equalize the beat. Nothing special, but it passes the test.

Be Cool
Featuring Swan
The tone in Buckshots’ voice is that of an annoyed ex, which is where he is situated on this track. When Swan comes in, she plays his former other-half, but Buck just ain’t having it. And is it just me, or does the “wooing” sample vocals in the background sound like a train strolling through? Overall, a nice hand clapper.

Go All Out
Featuring Carlitta Durand
This was the first single from the album, and at first I really wasn’t feeling its vibe. Overtime it grew on me though, and one thing that is noticeable after throwing it on repeat is its sonic sound. Every little spliced part falls right into place as the track goes on. Quality.

No Future
After listening to the album the first time through, this was one of the tracks I went straight to for a second and third listen. I’m definitely feeling the darker vibe, from the beat to Buckshots’ lyrics.

Hold It Down
Featuring Talib Kweli & Tyler Woods
Similar in type to “No Future,” the production from 9th is not so much heavy as it is dark. I swear, the storyline for the music video was almost exactly as I imagined it would be when I first listened to it (it’s ok, you don’t have to believe me). Talib jumps on this to give it some extra NY wordsmith. Also, from the few tracks I’ve heard Tyler Woods on, he is most definitely a soul brother to be reckoned with.

Whassup With U
Featuring Keisha Shontelle
Aww man. The beat for this one is just clean, an absolute head nodder. If Buckshot had a true swagger track, this would be it. And featuring Keisha Shontelle (like on their previous collabo album) on the hook just completes the trifecta. Mix a sexy voice with a sassy tone, and you get a fly lady like Ms. Shontelle.

Only For You (Lou)
After the previous heater, it’s difficult to jump right into this track. It’s much slower and softer, as Buckshot gives shout outs to past friends and family. Though you can hear the passion in his voice for Lou, it just doesn’t fit his demeanor no matter how you want to slice it. Not one of 9th’s best beats either, as the production is somber and stagnant, almost depressing.

Just Display
I’m on the fence with this one. Buckshot spits some cautious words about “that” club girl you have to worry about. However, the production on this one isn’t as great as the bulk of the earlier tracks. Overall, an average track with a good lesson.

Here We Go
Having more of an R&B feel, this track features Buckshot getting his grown man on. His swagger is not so much sly as it is a command though. Also, the hook’s repetitive chant of “here we go” is a bit dull.

Throwing Shade
This is one of the most complete records on the album. 9th brings pure mastery on this melodic banger, which is a great thing considering the last three tracks lacked an enticing vibe. Buckshot has his way with the wordplay as he raps about intermingling in someone else’s relationship. Definitely a player move on his part.

Shinin’ Ya’ll
Featuring Arafat Yates & Big Chops
And then we get this. All three rappers jump in like it’s a cipher, but the beat is nothing close to this same environment. Although it’s a close race, I would say Buckshot got “shined on” by both Arafat Yates and Big Chops.

Man Listen
A good track to end the album with. Buckshot raps through a catchy soul sample mixed with strings, and his words are straight and direct with a hook that has a hopeful outlook; “it’s a new day, a brand new mission.”

Bottom Line:
Much like on Chemistry, Buckshot brings very few rappers to the project, which is an instinctively good idea. This gives him the chance to make or break the album, and he does a fairly good job of holding 9th Wonder’s beats down. Likewise, 9th Wonder brings some extra heat on this album to boost his ever-expanding catalog and resume. However, full collaboration albums are always going to have some hits and misses no matter how you plan for it. The Formula is no different. Most of the tracks are above average, yes, but there was not enough growth between this and Chemistry. Of course, both of them have several ventures outside of this, and that could have hindered their collective creativeness together. Ultimately, I enjoyed their latest installment together because, let’s be real, you can’t go wrong with tracks from 9th and bars-galore from the leader of BCC.