Atmosphere – When Life Gives You Lemons, You Paint That Shit Gold [Review] 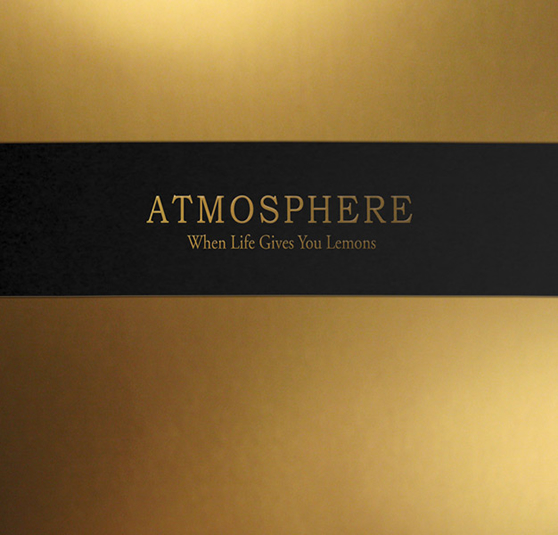 Not many people, let alone so-called “Hip-Hop Heads”, knew about the Hip-Hop group Atmosphere. That was until their latest release When Life Gives You Lemons, You Paint That Shit Gold debuted #5 on the U.S. Billboard 200 (Took y’all long enough to realize). After plenty of great releases including You Can’t Imagine How Much Fun We’re Having in 2005, does this latest release continue the standard and match up to its chart position in being one of the top Hip-Hop albums in 2008?

Like The Rest Of Us
Produced by Ant
All of the music production on this album is handled by Ant, who is the group’s producer, and that’s perfectly fine when such soulful music is provided on this track. As soon as you hear the initial piano chords you know you’re in for something special. Slug drops some intelligent, deep rhymes on this track that perfectly match the beat and mood of the song.

Puppets
Produced by Ant
Ant starts off the next track the same way he did the first with some strong piano chords. The beat continues this way until the second verse when the drums kick in and give the track some extra life and energy. Slug does a great job with the rhymes on this track in talking about how some people are puppets and selling themselves just for the fame, fortune, and shine; “I know a guy with a rock star life/But he still don’t fly, so he’s mad at the sky.”

The Skinny
Produced by Ant
This next track sees Ant bring something different to the table from the first two tracks in a heavy synthesized styled beat. This is a good track especially when you pay attention to what Slug is saying in his rhymes in talking about cigarettes (“The skinny white pimp”). That’s something real creative that isn’t seen much in today’s Rap music.

Dreamer
Produced by Ant
This track featured some really nice production work from Ant. This is a very active track that would sound great performed live. Slug drops nice storytelling rhymes about the life of a girl and how she must hold on to her dreams.

Shoulda Known
Produced by Ant
The beat on this track by Ant is a straight banger! If you cruising listening to this song in your ride it’s gonna THUMP. Slug is on top of his game on this track sounding very comfortable over the heavy pounding beat. This song is kept short and to the point. This is one of my favorite tracks on the album.

You
Produced by Ant
This track sees Atmosphere kind of switch up the pace on us, but nonetheless this track delivers. A funky sounding beat by Ant combined with some good rhymes by Slug is a winning combination.

Painting
Produced by Ant
This track brings up back down to the level that we were at the beginning of this album with a more somber sound. This is another song that you really have to listen to what Slug is saying in his rhymes to truly understand the message within. This track stands very true to a lot of things and people nowadays.

Your Glasshouse
Producer by Ant
Ant keeps the mood somber with the production on this track as it nicely fits together with Slug’s rhymes and what he’s talking about is drinking and the hangover that follows along with the emotions and feelings.

Yesterday
Produced by Ant
This is the track that initially caught my attention upon listening to the 30-second sample on iTunes. Ant does a fantastic job on the production on this track with the very soulful sounding keys. Slug’s rhymes just complete the track and make this one of the best songs on the album.

Guarantees
Produced by Ant
This track features a guitar based beat from Ant with Slug delivering some heartfelt rhymes over the mellow sounding beat. Some people say when things are done simple the results are the best and that can be said with this track. No drums needed, just a guitar, which allows you to focus better on the rhymes.

Me
Produced by Ant
Ant brings the boom-bap back in with the production on this track. Even with that he still manages to keep the track somber and very fitting with Slug’s great storytelling rhymes. On this track Slug tells about a guy going through the ups and downs of relationship and love.

Wild Wild Horses
Produced by Ant
Ant continues with the great production with some very lively instrumentation on this track. Slug sounds right at home spitting rhymes over this beat and that just makes for another great track.

Can’t Break
Produced by Ant
On this track Ant returns with the synthesized music production. Even though the beat is pretty good and Slug delivers some nice rhymes, this track is probably my least favorite on the entire album. Now that doesn’t mean that it’s not a good track, it just wouldn’t get the most play from me.

The Waitress
Produced by Ant
This track has one of the best beats on the whole album by Ant. He really does his thing on the production side that connects nicely with the lyrics from Slug. Once again Slug displays his great storytelling ability as he talks about a waitress in a café.

In Her Music Box
Produced by Ant
This is a most fitting way to finish off this album as the beat by Ant brings it full circle. Slug does a good job with the lyrics in talking about his daughter on this track.

Bottom Line:
I believe that Atmosphere has done it again in picking up right where they left off with You Can’t Believe How Much Fun We’re Having in dropping another great album. The difference this time around is that they did it even better and upped the standard. After listening to a friend’s copy of this album, I immediately headed to the nearest music retailer and purchased my own copy. This album has had daily rotation since and it might be a while before it stops. The best thing about this album is completeness and unity it displays throughout all of the tracks. That’s the best thing about working with just one producer for an entire album in that you’re able to keep the album connected in one form or another without it being spaced too much with different producers and styles. Ant and Slug show why they are a great team together and why they have been one of the top underground Hip-Hop groups for a while now. The great thing is that now the rest of the world are waking up to that fact and it’s not just “underground” for them anymore. An underground Hip-Hop group and independent Hip-Hop record label in the Billboard Top 5…That’s a great day for Hip-Hop right there and everybody who truly has a love for it should be out supporting it and keeping it going. Don’t wait for another person to tell you how great this album is or just from seeing/hearing about it via mainstream (MTV, VH1, etc.) before you decide to go cop this album. This album is very necessary!!! Props to Atmosphere for making it to the top and keeping it real by doing it their way and not the industry’s way. Keep painting those lemons gold cause pretty soon those gold lemons are gonna become a gold plaque.

nappyPicks: “Yesterday”, “Shoulda Known”, “Like The Rest Of Us”, “The Waitress”, & “Wild Wild Horses”