Concert Review: To All My Friends Tour 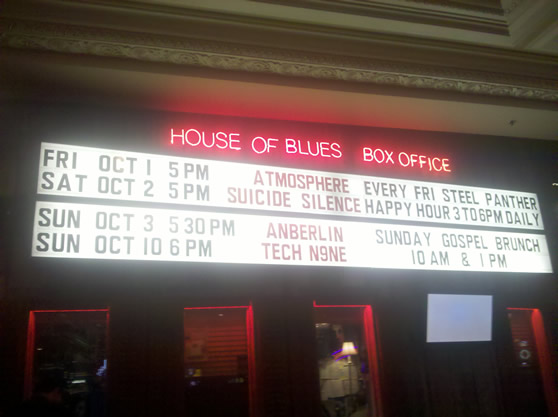 Rhymesayers Entertainment hit Las Vegas this past Friday and impressively sold out the House of Blues at Mandalay Bay. The tour was to promote the latest Atmosphere EP To All My Friends, Blood Makes The Blade Holy. Newly signed Rhymesayers Grieves and Budo was added to the undercard; as well as Blueprint and DJ Rare Groove.

DJ Rare Groove quickly got on the ones and twos when the doors opened at 5PM. After Rare Groove threw on some classic cuts, Greives and Budo took the center stage. The duo resides from Seattle and had their 88 Keys & Counting record re-released this year under Rhymesayers Entertainment. If you haven’t heard this album, then I highly recommend that you pick it up. The two have a very high awareness of music production. The two use numerous instruments in their beats and pull it off remarkably… “Life In The Hive” is one of my favorite instrumentals lately. They both share parts in production, but Grieves handles all of the vocals on the microphone.

They made their presence known by holding down the stage for nearly an hour for their first Vegas show. Grieves wore his heart on his sleeve as he put out enough energy to keep the crowd amped for the entire set. If that wasn’t enough, DJ Budo took turns playing several different instruments during the set, including the electric guitar, keyboard, and trumpet. He had the chance to do a solo with each instrument and I have to say he was impressive with all three. A few standouts included “Learning How To Fall”, “Gwenevieve”, “Identity Cards”, and “I Ate Your Soul”.

Blueprint took the stage next and was accompanied by DJ Rare Groove. Blueprint displayed his freestyle abilities by introducing himself and Rare Groove to the stage over the “Daytona 500” beat. The duo demonstrated how the chemistry of how a rapper and dj should be. Rare Groove did a fine job of mixing as Blueprint murdered beat after beat. Some highlights of the set were “Hand-Me-Downs”, “Boombox”, “Printmatic”, “Tramp”, and “Extra Mile”. The only problem I had with the set was the high pitched microphone.

Atmosphere took the stage around 8PM with N8 (Guitar), Erick (Keyboard), Ant (DJ), and Slug (Emcee). Lately, the group has been touring with a live band. In most cases, this doesn’t work for Hip-Hop groups as many people state it’s a poor attempt of going outside the box. However, this band truly adds flavor to the performance. When you see Atmosphere live, you get a chance to hear songs remixed in several different ways. For example, “Yesterday” is a really deep emotional song that many artists won’t even attempt to perform live. Last time I saw Atmosphere perform the song, they added a twist with extra keys and an electric guitar that gave the song an entire new mood. 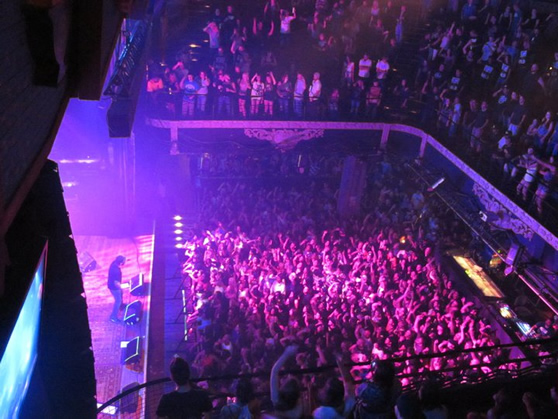 Atmosphere opened the show with their celebrated “Trying To Find A Balance”. At this instant, there was no coming down as the venue was louder than I ever heard it. The group went on to play a wide variety of their discography from their debut Overcast! EP (1997) to their latest To All My Friends, Blood Makes The Blade Holy EP (2010). Some rare performances became immediate standouts: “God’s Bathroom Floor”, “Scapegoat”, and “Like Today”. One of my favorite songs came with the band revamping “Shrapnel”. Nevertheless, there was something for everybody because the crowd stayed ecstatic for the whole two hour set. 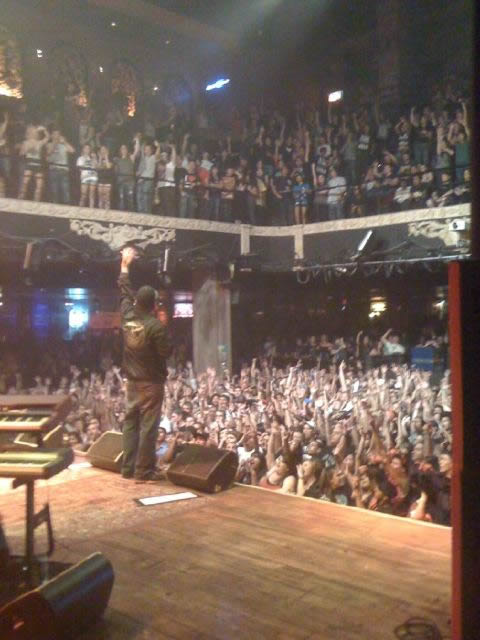 Playlist (in no order):