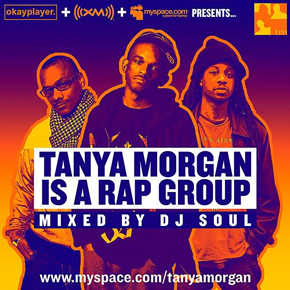 I’ve mentioned them a few times in other colums and reviews and even featured Von Pea’s American Angster mix album. From the emails I’ve gotten, some of you still aren’t familiar. Tanya Morgan is a rap group made of Cincinnati emcees Donwil and Ilyas and Brooklyn native Von Pea. The trio did most of their work by cutting vocals at home and sending them to each other via the internet. They were featured in XXL and had an album reviewed in the Source. As I mentioned before they’ve worked with Nicolay as well as Large Professor and The Justus League who blessed us with Little Brother and Jozeemo amongst others.

They dropped Sunset an EP in 2005 which was largely a mixtape feel that let you know that this was a force to be reckoned with. They came back in 06 with Moonlighting which has since become an underground/in the know type classic. This year they released Tanya Morgan is a Rap Group, a mixtape done by DJ Soul. It’s a free drop of 20 tracks (interludes not counted) and has been downloaded over 10k times. It also features 5 of my favorite TM songs; “She Moved Outta Cincy”, “You Should Know”, “Walk My Way”, “Four Men” featuring Kay of the Foundation, and “Come Here Shawty” featuring Ink Floyd. I thought we were all up on them, but like I said, I guess we weren’t. Better late than never, get a hold of this free mixtape and get familiar with one of, apparently, one of hip hops best kept secrets. Remember, Turn Yo Headphones Up.

Bottom Line:
If this mixtape doesn’t get you to run over to their myspace or TanyaMorgan.com and purchase Sunset and Moonlighting, I don’t know what will. Von Pea also has a solo album circulating called Grand Vonye that dropped in 2007. Get familiar.