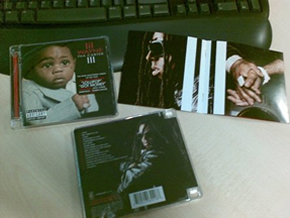 Earlier today, a picture of Tha Carter III popped up on the net all wrapped up and ready for leaking. Did an inside source strike again? Did the album fall into the wrong hands? Could this be a retaliation to Lil’ Wayne’s statement from an interview last week about mixtapes DJ’s?; “I don’t remember the mixtape deejay—tell this dude who he talking to. I’m not into all that shit. I don’t know no mixtape deejay. I am the originator. I’m him. I created the mixtape game but I’m not in to that anymore. I’m doing Lil’ Wayne. I’m against it—and to the mixtape deejay, I don’t know no mixtape deejays—fuck you. I’m on Top 25—I ain’t put out 25 mixtapes. So fuck y’all. Fuck DatPiff. Fuck mixtape deejays. Carter III coming June 10th. Go get it or don’t go get it, suck my dick. I’m smelling myself. I’m too good,” Yeah. Being that he has the most anticipated album of the year, he might have stuck his foot in his mouth. Shit, maybe it could it be a fake? As of right now, the album is not on the net (And still scheduled for release on June 10th). I guess it’s all a waiting game now.