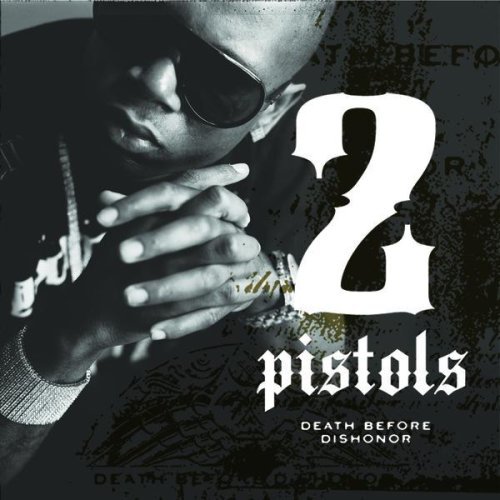 After years on the independent grind and after scoring a hit with the T-Pain assisted “She Got It”, 2 Pistols is ready to release his debut album Death Before Dishonor. Now I’d be lying if I said I was looking for this album (As a matter of fact, I had to explain to King Jerm who 2 Pistols was). Being that 2 Pistols is from Florida (Tarpon Springs to be exact), I expected the 19 year old to get more buzz since that state has been turning out a some hits lately. One thing I did notice looking at the tracklistings, is that J.U.S.T.I.C.E. League produced most of his album (They also produced the best songs off Rick Ross’ Trilla album, “Luxuary Tax” & Maybach Music”). Maybe this 19 year old has something; let’s find out.

1. Intro
A skit where 2 Pistols is in court and barely escapes 15 years on a drug charge after his friends snitch on him (He gets house arrest instead). It’s an okay intro; it’s been done before, but the quality is there.

2. Death Before Dishonor
Produced by J.U.S.T.I.C.E. League
I guess this track could be also taken as an intro; it’s barely over 2 minutes. 2 Pistols breaks down the title of the album (basically don’t snitch) with lines like; “These Kanye West ass niggas speaking through the wire”. The beat does it’s thing as a high paced Southern party starter. If you was to ask me how 2 Pistols sounds, I guess I would say it’s a cross between Lil’ Wayne (With the talent turned down), Plies, and some Young Jeezy (With the charisma turned down).

3. She Got It
Featuring T-Pain & Tay Dizm; Produced by J.U.S.T.I.C.E. League
The first single off the album and probably the whole reason he got the deal with Universal. I guess the reason this song didn’t make a bigger splash (Like say, what Plies and T-Pain did with “Shawty”) is because T-Pain overpowers 2 Pistols on his own track. It no longer sounds like 2 Pistols featuring T-Pain, it sounds like T-Pain featuring another rapper. 2 Pistol doesn’t really do anything to get noticed (I caught the Jay-Z line too). I always like that beat though. Oh, who is Tay Dizm? He’s a rapper on T-Pain’s label; he’s horrible.

4. Been Throwin’ Money
Produced by Kane Beatz
When will rappers understand that throwing money in the air is getting real lame (I personally never thought it was smart)? Besides the worn-out subject matter, it’s actually not a bad song. The horn heavy beat is a club ready track that 2 Pistols rides well. That hook could have been better, but I sure the hoods/strip clubs will love it; Any city that I’m in/They know that I’m the man/See I never heaistate/I’m quick to pop these rubber bands/Bitch I been throwin’ money.

5. Getting’ Money Mane
Produced by J.U.S.T.I.C.E. League
Wow, 2 songs in a row with “money” in the title. Do you see a theme occurring? The beat on this track is nice! 2 Pistols does his thing, I just wish somebody with more talent could have jumped on it. It’s not just that talking about flossing, guns, and women gets tired. I just think if you gonna talk about it, talk about it with more creativity or bring something different. While lines like about “poppin’ tags”, “suicide doors”, and “putting hole in ya ass like hoola hoop” may excite others; it has me yawning.

6. Let’s Ride
Produced J.U.S.T.I.C.E. League
Damn, the beats that J.U.S.T.I.C.E. League gives to this dude are crazy. This one particular is sick! If somebody like Jeezy or T.I. was to jump on this, it would be a certified hit! Not saying that 2 Pistols doesn’t sound good on the track. Check this one out for the beat alone (I caught another Jay-Z line too).

7. Flexx 2008
Produced J.U.S.T.I.C.E. League
Yes old heads, 2 Pistols remakes Mad Cobra’s reggae hit “Flex”. It’s okay; kinda funny. It uses the same hook from the original with rap verses added. Of course its another song aimed at the radio/ladies/clubs. If you like the original song, you might wanna check this out.

8. Eyes Closed
Produced J.U.S.T.I.C.E. League
This song uses a screwed up Young Jeezy Line (Don’t ask me from what song); Frost been that/And my wrist froze/You can see my damn watch with your eyes closed. I guess you can tell what this song is about. The beat is okay (He actually sounds a lot like Jeezy here), but another song about money and jewels? Really?

9. Phone Skit
This is a voice message of 2 Pistols’ lady warning him about messing with other girls; very (not) original.

10. You Know Me
Featuring Ray J; Produced J.U.S.T.I.C.E. League
This is supposed to be the second single off the album. When did Ray J become the go to guy for R&B street hooks (Styles, AZ, etc.)? The track has 2 Pistols explaining to his girl about he can’t leave the streets. It’s your average track, but I never really liked Ray J.

11. We Run It
Featuring Slick Pulla & Blood Raw; Produced J.U.S.T.I.C.E. League
2 Pistols hooks up with USDA’s Slick Pulla & Blood Raw on this one (Young Jeezy’s boys). Do you think Jeezy sends these guys when he’s not available? The beat as well as the whole song seems kinda generic. Nobody really say anything noteworthy with their tough talking.

13. That’s My Word
Featuring Trey Songz; Produced J.U.S.T.I.C.E. League
I see 2 Pistols is really trying to make sure this album gets radio play. I noticing he has quite a few songs for the ladies/radio on this album. This songs has him asking a girl to leave her man for him (Another unoriginal rap concept right?). Trey Songz does his thing and the beat is well produced, but it feels like we’ve heard it all before.

14. Robbery
Here the “Young Boss of the City” (He says this on almost every song on the album), tells the story about when he got robbed at his house. I applaud him for actually keeping it real and admitting to getting rob. Don’t get it twisted though, 2 Pistols makes sure not to make himself sound like a punk. It’s not a bad song though, and it shows that he has some storytelling ability.

15. Lookin’ Down On ‘Em
Featuring BMU
2 Pistols brings out his crew Blood Money Union. The beat sounds like something you may have heard before but its okay; the rhymes from 2 Pistols’ boys, not so much. I’m really not looking forward to an album by BMU or a solo album from any of the members. It’s not terrible, but nothing to write home about amd a little boring.

16. Candy Coated Diamonds
Featuring Tyra B; Produced by D.A. On The Track Man
Another song about jewelry (I thought he already covered this on “Eyes Closed”.)? It has a ridiculous hook by Tyra B (You remember Tyra B?); Blue raspberries/Red strawberries/…I got all kind of colors. He should of kept this one off the album. Skip!

17. From The Bottom
Like most of today’s Rap releases, 2 Pistols gives his inspirational story at the end of the album. Even though the story is typical of the “dopeboy turned rapper” stereotype, it’s still one of his better tracks. The beat fits well with the lyrics and content, so I guess its an okay way to end this album.

Bottom Line:
I admit I’m a little hard on this younger rappers coming up in Hip-Hop. When I say younger I don’t mean Weezy, Juelz, or Lupe; I mean in the 18 and 19 age range (Remember my Tyga review?). A lot of these younger rappers like 2 Pistols don’t invent anything new or add anything different to the game, they just retread on current trends. 2 Pistols is not a terrible rapper, just a standard one; he may need some more seasoning. At best, 2 Pistols managed to put together a clichéd average album. The real highlight of this album is the production. If you are a fan of good beats over lyrical prowess and charisma, you might wanna check this out. If you’re looking for a new Southern king in the making, you may wanna look elsewhere.