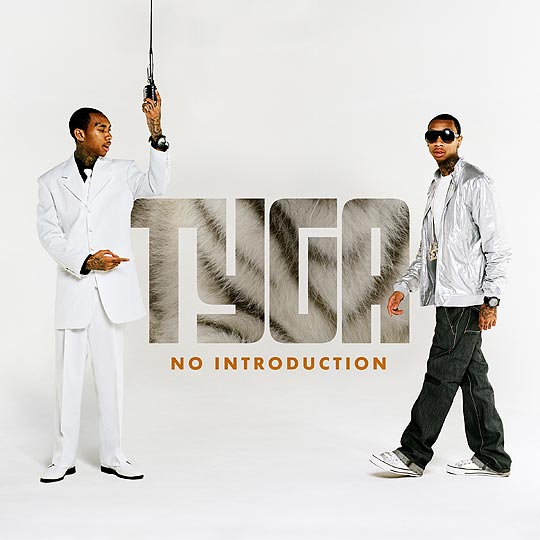 At age 18, Compton/Gardena’s own Tyga already has a lot going for him. He’s signed to Lil’ Wayne ‘s Young Money label, while also being signed to Fall Out Boy member Pete Wentz’s Decaydance Records. In addition, Tyga’s cousin is Travis McCoy, lead vocalist of the group Gym Class Heroes. He’s also had a well received mixtape series (No Introduction The Series: April 10th & May 10th) and had a high profile appearance beside Weezy and Fall Out Boy at last year’s 2007 MTV Video Music Awards. So, what does all this mean? Well, actually not much to be real with you. While Tyga does have a little buzz, his album is also dropping on the same day as his labelmate/boss (You might have heard of a little anticipated album called Tha Carter III) and the most news Tyga has made recently is not because of his music, but being robbed for his jewelry by G-Unit affiliate 40 Glocc. But don’t feel so bad for him; look past all the tattoos, hip clothing, and jewelry and at the end of the day, it’s all about the music right? Let’s check it out…

1. Diamond Life
Featuring Patti Crash; Produced by S*A*M & Sluggo
The album starts of with a rock inspired track that blends well with Tyga’s flow (Which reminds me of a lesser Lupe, but that’s not a bad thing). On the track, Tyga gives you insight of his life from being addicted to tattoos at 17 and having a father in jail. Not a bad hook either; I would of like it better without that “playboys and socialites” line, but still good.

2. Coconut Juice
Featuring Travis McCoy; Produced by S*A*M & Sluggo
I ain’t gonna lie, when I first heard this track a few weeks ago, I hated it. But after a few more listens, I still hate it. In an interview when asked what “coconut juice” is, Tyga says it’s just something he made up because he doesn’t drink alcohol in the clubs. So now I really don’t understand the track at all. The production just seems so generic. Travis McCoy jumps in towards the end for a few bars, but nothing notable. SKIP!

3. Supersize Me
Produced by Patrick Stump
It’s funny, everybody was telling  me this cat was different, but so far, I’m hearing the same; Jet lag/Louis Vuitton bags/Under the I.C./They don’t recognize me?/So are, you following me?/Cause I stay puffed like the Marshmallow Man. Come on Tyga, I thought you was better than to spit this over another generic beat about flossing. SKIP!

4. Don’t Regret It Now
Featuring & Produced by Patrick Stump
Okay, now the album picks up with this track. That rock feel comes back when Fall Out Boy’s lead singer Patrick Stump shows up on the hook. (First The Roots and now this, is Patrick Stump going at Chris Martin for Hip-Hop’s favorite alt. rocker?). Even though Stump steals the show here, Tyga gets deep about life’s regrets. I could see MTV eating this shit up too.

5. Pillow Talkin’
Produced by Stress
Tyga gets at the ladies on this one. Over a 60’s sounding, piano laced beat, the songs get a little too mushy as it’s goes on. He was reaching on this one sounding more like a middle schooler with lines like; Thinking, you was my golden token/Now I’m feeling frozen /Looking like my like is hopeless. Yeah, my little niece may like this one, but not me.

6. AIM
Produced by Lu Balz, S*A*M, & Sluggo
I guess rhyming about picking up girls on AOL Instant Messenger is a little different; not by much but still a little different. The hook though? She don’t know me by my name/She just know me by my AIM. That sounds like some shit Lil’ Zane would say! The beat, while not terrible, still has that same generic feel as previous track.

7. First Timers
Featuring Evan Taubenfeld; Produced by Evan Big Evil
Maybe his labels are trying to market him as a teenage heart throb or something? This song isn’t in the same vain as the previous “Pillow Talkin’”. The hook sounds like something the Jonas Brothers would jump on, no lie homie. Tyge goes on about being young and in love, but for me it really misses the mark.

8. Cartoonz
Produced by S*A*M & Sluggo
This is Tyga’s attempt to do a concept song. He tries to take popular cartoons and flip them into everyday life. Meet me/The Looney Tune 17 from the CPT/Ed, Edd, And Eddy couldn’t beat me in more D’s/Roll 22’s on the whip/They call them Fantastic Four’s/Whoa I’m sick. Damn. I prescribe that he listens to “Labels” by Gza to see this kind of thing properly done. Points for trying though.

9. Summertime
Produced by Stress
Finally something I can’t trash! Tyga finally delivers on this one and steps it up; She know I spend c-notes on all my people/Well done/Ain’t nothing like that pool party fun/I got plenty drink/Give the pool party some. Of course it’s about the summer, but the beat on this one is laid back and appropriate for the subject. It’s funny how a good beat brings the best out of almost any rapper. I can’t hate on this one though.

10. Press 7
Featuring Alex DeLeon; Produced by Evan Big Evil
Tyga definitely has the hook up on the rock beats and hooks (Of course right?). It seems as if this beat is a little too big and overpowering for Tyga as he rhymes about breaking up with an ungrateful girl. The production is nice and the hook is tailor made for crossover appeal. Not a good song, but not bad either.

11. Woww
Produced by Patrick Stump
On this track, Tyga definitely is aiming for the clubs with this synth heavy song. On further listen though, you hear that he is actually going at wack rappers and industry heads. The hook is okay, but in it and the verse he talks about having this new sound that he really doesn’t. The actual song is not terrible though and shows that Tyga can actually write a complete song.

12. 2 AM
Produced by Stress
This song had good intentions but it kinda failed. I applaud Tyga for baring his soul, but with lines like; “My step dad beating me again/For a bad grade?/He must have had AIDS” or “Like mace from the police/I was danger”. He gets his point across but it could have been better. The beat was okay too,

13. Est. (80’s Baby)
Produced by Patrick Stump
“Almost EST in the 90’s/ But I’m still a 80’s baby/Don’t even try it’s the way God made me/It’s the way God made me”. Does this make sense to you? Being born in the 80’s isn’t like being Black or anything is it? Beside that weak hook, the beat actually has an epic feel to it. I guess it a good way to close out the album. Not a slam dunk but strong for this album.

Bottom Line:
Earlier in the review, when I said his flow reminds me of a “lesser Lupe”, that wasn’t a diss. Okay, maybe it was a diss to Lupe, but it might have been too big a compliment to Tyga. While he isn’t talking about shooting people, or dealing drugs, he talks about flossing just as much a Lil’ Wayne. Tyga touts that he’s bringing something different to Hip-Hop but really doesn’t bring much to the table as far as anything fresh and new. While not talentless, his lyrics could be compared more to Bow Wow or Lil’ Zane. Let’s be real, this album will be buried from the press of Tha Carter III when it’s released Tuesday. But is that a tragedy? No, all the co-signs in the world can’t buy you a good album.