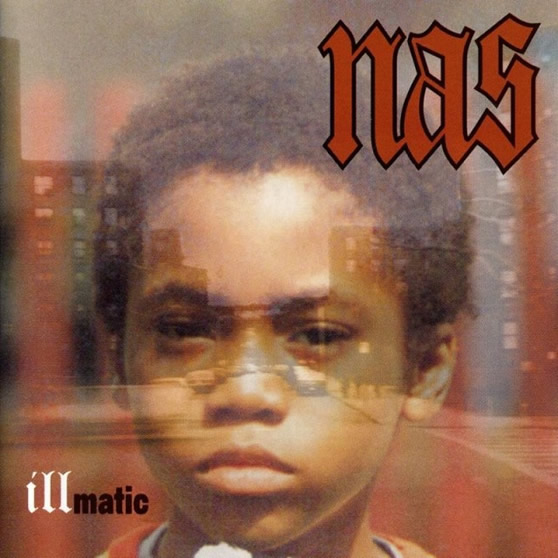 Nas first came into the rap game on his debut single, “Halftime”, which lyrically still blows me away with lines like: “I drop jewels, wear jewels, hope to never run it/With more kicks than a baby in a mother’s stomach.” It’s still hard to believe that Nas can keep up the same kind of consistency that he keeps today;you can’t show me one person who loves Hip-Hop that can wait to hear Nas’ new album Untitled, or Nigger as it should be called. At least what hasn’t been leaked so far. Illmatic was what started it all. It was Nas’ first album, and would be the album upon which ALL of his albums would be judged, for better or for worse.

Nas’ sound at this time was really raw compared to future works, but that was to be expected: he was working on this album after his friend and producer, Ill Will was shot and murdered in Queens. The album has a harsh sense when it comes to the realities of the world: like on the track “Life’s a Bitch”, simple as that. Life’s a bitch, and then you die. Tell me THAT doesn’t describe life in a nutshell! The thing about Nas that makes him so amazing is that he is one of those brothers who will tell you like it is, no bullshit. Then he adds his awesome lyrical ability, and there is almost no contest. Production on this album includes Pete Rock, DJ Premier, and Large Proffessor, an all-star line up that created the gritty sound on the album’s tracks.

This entire album is like a page out of Nas’ diary. Nearly every song is about what normally goes on in his life and how he deals with it. In “Life’s a Bitch”, the hook goes: “Life’s a Bitch, and then you die, so we get high cause you never know when you’re gonna go.” Then right after that, he follows up with the classic song “The World is Yours”, which almost contradicts what he just said, but does it so well, you don’t even care. Check out “It Ain’t Hard to Tell” if you want great production plus awesome lyrics: it samples Michael Jackson and works! “It ain’t hard to tell, I kick a skill like Shaquille holds a pill/Vocabulary spills I’m Ill/plus Matic, I freak beats slam it like Iron Shiek/Jam like a tech with correct techniques”. Wow. Did anyone catch the title reference? Ill plus Matic? Yeah, that’s how good he is.

It’s really hard to look for weakness in this album, mainly because there isn’t any. Nas has one guest on it, AZ, and he holds his own aganist him, though AZ spit a career starting verse on “Life’s a Bitch”. If you really want to be picky, the album is only 10 tracks long, counting the skit at the beginning of it, but the songs are so good, you’ll be listening to them for awhile. It’s a shame how Nas isn’t too well known to the average hip-hop fan when he’s this good, 14 years later. Because when you’re that ill, you must be Illmatic.