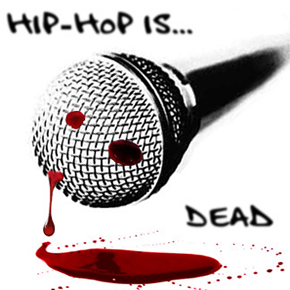 In this weekly post I will just rant and rave about what I see going on in Hip-Hop and will decide whether Hip Hop is alive or dead for the current week. Enjoy.

It’s funny what seven days can change. Last week the buzz was still surrounding Lil’ Dwayne Carter and his 1 million plus sales week. Hip-Hop was alive and well. Hell, even Plies had came in at a decent number 2. Yes Plies*. Jay-Z’s whole show from across the pond showed up online and 50 Cent and his goons for hire, Yayo, and Banks, were running around creating beef with anybody within 10 feet of them to try and get some buzz for their new “flop” album. Surely they wouldn’t sell a million but going gold the first week out is nothing to sneeze at.

Weezy F. Baby fell another 25% in record sales although we can expect him to jump back up a few notches after the interview with nappyafro. We like to call it the nappyafro bump. Anyway, then we have the debacle of the G-Unit album**. They barely cleared a hundred grand and everybody knows 50 is famous for buying at least 50,000 copies of any CD he drops. Scary right? There is considerable buzz about Universal being behind Wayne’s high record sales. Then we have some guy named Yung Berg…is it Yung Berg or Bird or is it Burger? I don’t know. Anyway y’all know who I’m talking about, saying the most ignorant things he could possibly think of out of his mouth. The question is why was there even a camera near this dude for us to see and hear it? Go play on the monkey bars or something.

If you didn’t think what he said was a big deal then just imagine my man Bill O’Reilly had said it. Puts everything in a different perspective now doesn’t it?

Look people, with  Yung Burger and Teddy Riley’s son, and all the G-Unit stuff infiltrated the internet this past week I have decided to trash my computer.

Where’s the excitement? Where’s the buzz? Jay can you just announce you’re dropping another album? I’m not even all that excited about the Nas release although I’m hoping for good things. There’s the new song by Big Boi and MJB so maybe he can help save the cause next week.

But for this week my verdict is HIP HOP IS DEAD. Thanks a lot 50 and Berger.