The New King of Hip-Hop 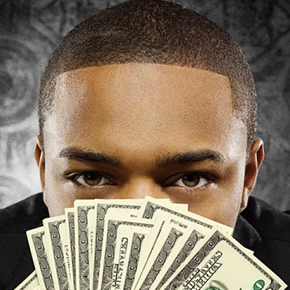 I was just listening to some music lately, and then it hit me: who’s gonna be runnin’ this rap shit in 10 years? The big name rappers will have most likely retired for good by then: Jay-Z will be pushing almost 50, and all the real rappers will be in their mid-40s at least. I mean, will this stop them from rhymin’? Probably not, but will the newer generation buy their albums is the question. Weezy will be going on 40, same with T.I., Jeezy, and Kanye, so they will most likely be in the same boat Jay-Z is in right now: highly respected, but not puttin’ it down like they did before.

Soulja Boy said to Ice-T in his video “There’s young niggas eating now.” That’s true, but do any of these niggas have what it takes to take the throne? Let’s see what we got, and who could fill the throne.

Bow Wow: He’s got OK rhymes, but he really needs to grow up. He’s probably the only rapper right now I could see who could make a serious attempt at being king. I could see Bow Wow maturing and taking the rap game to another level, but he’ll have to work on those rhymes. I doubt that he’ll become amazingly lyrical, but he’ll be enough to pass.

Soulja Boy: I really just put him on the list for shits and giggles. He’ll have to come up one dance every single time he makes an album if he wants to be successful his entire career, and I’m sure he’ll run out of ideas soon, and unless ABC rhymes become what the rap game is about(and if is, I’ll start listening to country), then I don’t see a long career for Soulja Boy. He’ll make his money before then, though.

Lil’ Mama: Yeah I know it says King of Hip-Hop, but we’ve got some female MC’s out there too. Lil’ Mama’s got some serious skills, she could actually claim this spot in my opinion. If so, that woul’d be very awesome for all the ladies out there in the game; we’d probably get a lot more female MC’s too, so maybe this is what we need in the future. It might happen too.

Romeo: He’s not bad, but to be honest, I’m not sure if he’s as popular as Bow Wow. I mean, he killed Bow Wow on “U Can’t Shine Like Me” and I think he’s decent, but he’s only got one album out where he’s a teenager. All the other one’s are when he was young. But if he actually gets into the rap game, we could see a huge beef form between Bow Wow and Romeo over the crown a la Tupac and Biggie, only much, MUCH less hardcore.

Yung Berg … I only put him up because he’s young enough to be a contender, but after what he said recently, I’m going to have to say HELL NO!

Hurricane Chris: Yeah, same deal with Soulja Boy, except he’ll have to come up with a new saying every single time he drops an album. That’s technically not as hard as making up a new dance, but his debut album hasn’t even gone Gold yet, so nah.

V.I.C.: He’s that new rapper who released that song “Get Silly” with Soulja Boy. Yeah. NEXT.

Tyga: Ok, from what I’ve heard, Tyga is not very good. Not at all. But hey, things can change? Right?? Maybe once Tyga is actually DOING all the things he talks about in his songs and is smart enough not to release an album the same day as Weezy, he’ll be successful. But I doubt he’ll ever be considered for the top spot.

Arab:  Just like Yung Berg, I only put him up because he’s young enough. In my opinion, every person on this list has a much better chance of being king than Arab: the nigga hasn’t even made an album yet! When he rhymed “get this money” with “Doo-doo head dummy” on “Yahhh!”, I was done with him. I could see him being Soulja’s boy’s Bitch/Hype Man, Just like Notorious and Diddy, but with the talent cranked way down for both of them.

Conclusion: Right now, I’m praying to god that a decent MC that’s under 18 comes into the game, because if they don’t, the future looks pretty ugly. I mean, some dudes on that list could take it, but it’ll be sad what Hip-Hop will be like without dudes who can put shit down. Let’s hope most of these guys go to the dollar store to buy a pen and paper soon.

Honorable Mention: Soulja Boy, if he can keep the dances fresh.