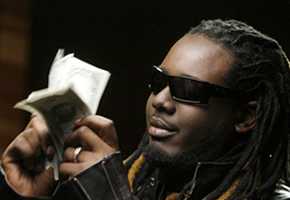 Alright, last time I wrote about my concerns on who would run the rap game when all the greats are too old or not popular enough to continue. Some people loved it, other people hated it, and some people thought I was sleeping on some new up-and-coming artists, like Huey, Webbie, Blu, Dolla, and even Aster Roth! The column got a whopping 27 comments in one day! But I was kind of disappointed in myself for having slept on dudes like Blu and Webbie. They deserve some respect in the rap game, especially when they come hard with their music.

In light of that, I’ve decided to do a “Part II”. In this version, I’m going to review the artists that I think I slept on. Most likely, I’m going to sleep on a couple more young artists. But hey, I’m only human, and that means there will be an even better “Part III”, if need be.

Let explain how I choose the “KING”. The King of Hip-hop has to have three things: Skill, Popularity, and Longevity. Look at Biggie or Tupac; they have all three of those. That’s what I’m looking for. If you’ve got the hottest skills but people don’t know who you are, you’ve got no chance at being respected as the King (Lupe Fiasco – CRAZY, but is finally getting noticed). Likewise; if you’re popular but have no skills, people in the game are going to hate you (Soulja Boy – Annoying as HELL, but you know him)! You feel me?

Another thing: a lot of dudes were flippin’ out when I said Bow Wow would become the new King of Hip-hop, tied with Romeo, when Bow Wow is 21 and Weezy is 25. People were like: “You tellin’ me BOW WOW is gonna beat WEEZY for KING??!?!”. Because of that, I’m going to put some estimates on where I think some of the most popular acts will be in 10 years also. There! That way, no one will get mad because their favorite rapper didn’t mentioned. Cool? Let’s do it!

Huey: This was the guy that everyone said I slept on, and to that I plead guilty. If he was the last list, Huey woulda been the King for sure, even though I wasn’t diggin’ “Pop, Lock, & Drop It” (Bow Wow dropped a nice verse on the remix of that too, fellas!). Huey definitely has some skills, but again like Romeo from last list, I don’t think he has the fan base. His album has been out for a year, but is only halfway to Gold. If he sticks with and and starts to sell some records, he’s a got a good chance in my eyes.

Webbie: He’s probably the one of the closest in my opinion, but he’s still sort of new in the game: sure, he’s been recording on a lower level, but this is his second major musical album that came out this year. For a southern rapper, he’s good as a rapper, much better than a lot of the rappers I put on my last list, and I really liked Savage Life 2. Like Huey, he could do it if he stuck with it, but I see a bigger chance with Webbie only because he’s slightly more popular: his debut album went Gold I think, but that was before bootlegging got as bad as it is now.

Blu: Ok…how do I say this?? Blu is amazing as a rapper, but he’s really underground. I mean, I didn’t even know who he was until last year when I read a review on nappyafro (I had liked that one). Then again, I’m just a teenager right? Well, Blu’s gotta get his name out there! He really could rap circles around any of the guys on this list, or on the last list, but if you’ve got no fan base, you’ve got no chance. But if it helps, I’m really pulling for him. I bought his album!

Dolla: For a second, as I was typing this, I was wondering who the fuck is Dolla?? But then I remembered: he was on that song “Who the Fuck is That” with T-Pain and that mediocre rapper Tay Dizm. Yeah he’s young enough, but why request him?? He’s pretty bad, doesn’t have an album out to my knowledge, and is on a mediocre song with the same formula we’ve seen a billion times: Get T-Pain to do the hook. That time it didn’t even work! The song peaked at #82 on the Hot 100! Dolla on this list represents pretty much everyone on the last list: NO CHANCE!!!

Aster Roth: Eh…I liked what I saw, but I don’t see a future here to be honest. But hey, I could be wrong. But he is SO underground! I don’t think he has a chance to be honest, but he does have skill.

Lloyd Banks: Compared to everyone else on this list, you might as well crown Banks right now. 2 albums out, 1 gold, the other platinum. Signed to G-unit, and has great lyrical ability, while being well known to many in the rap game: you think of him when you think of G-Unit, like it or not. Still though, when you look at a list like this, of course Lloyd Banks has got the top spot. If Weezy isn’t recording, he’ll be king.

T-Pain: Somebody said: “Wait!! Where’s T-Pain?? He’s only 23!”. Well, here he is. To be honest, I really don’t see T-Pain as a solo artist. He does have hot singles, but as a solo artist, he’s ok. Epiphany was alright…just alright. I kind of get tired of him and his Auto-Tune thing, but it’s not his fault exactly: its just we all hear him too often singing the same similar hook over and over again on some single. Usually the rapper who’s song he’s on is bad, but T-Pain makes his money anyway. He’ll be in the game as long as he can, but I don’t see him as king. I do agree that he is “The Ringleader” though.

OK, Now I’m gonna talk about the other rappers we know and love, and where I think they might be in 10 years.

Jay-Z: In 10 years, Jay will have become a Billionaire no doubt. He’ll most likely have stopped rapping, and will just concentrate on working with Roc Nation, which, by the way, will become the next Def Jam.

Lil’ Wayne: You know he’s never going to stop. I see Weezy going straight for the throat lyrically at this point, but if his albums don’t sell like they used to, expect him to be killing the Mixtape game, I don’t care what he says about mixtape DJs. If he’s still in the game, he’s the king, hands down.

50 Cent: Retired as soon as Before I Self-Destruct comes out: people will be tired of his bullshit by then. Just playin’, but for real, I don’t see 50 still in the game 10 years from now.

Eminem: Retired: King Mathers will be out, at this rate, in 2010, and then he’ll try to make another album, but it’ll turn into the Detox.

Dr. Dre: Still producing: Detox finally came out, and was amazing, just like everyone knew it would be.

Kanye: Still Producing. I can’t really say whether he’ll still be rapping. Only time will tell.

Snoop Dogg: Still rapping! I don’t think Snoop Dogg will ever stop. Why? Because he can.

Nas:  Still putting it down. Nas will be one of those rappers that consistently brings us that heat every other album. He’ll still be telling the truth about what’s going on in the world.

Conclusion: Well, I say we still need some newer, younger acts that can spit, but I mean I don’t think the future is all bad. We still got cats who can spit and really put it down like Blu and Banks. If I had to crown a king right now out of who we have, I’d say Banks, only because he has the popularity and the skill. But if Weezy is still in the game and selling records, he’s got it.