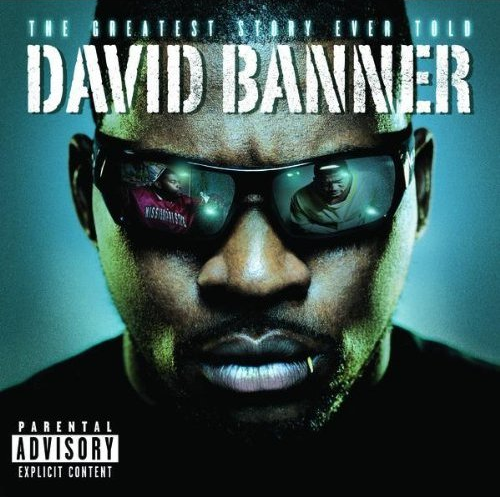 Taking a break from his recent stint in Hollywood, David Banner releases his fourth major release The Greatest Story Ever Told. Taking three years since his last album, Banner took on worthy causes on while away from the mic. Standing up for Hip-Hop in front of cameras in a time when Hip-Hop was becoming public enemy #1, Banner wasn’t looking for publicity. He was doing was he’s always done, speaking his mind. So do you think the Mississippi native will stop now?

So Long
Produced by Get Cool
Banner starts off the album with a bang by calling our generation a bunch of cowards. DAMN! I’m not mad, because the truth hurts some time. The song is HOT! Is it me or does Banner sound like Nas on this track? It doesn’t matter, the song is bananas!

G.S.E.T Intro
Produced by Warryn Campbell
Yeah, you have an intro as the second track. Awesome.

Suicide Doors
Featuring UGK & Kandi; Produced by David Banner
Sampling one of my favorite songs “Shoulder Lean” and featuring one of my favorite groups, UGK, Banner comes off with a BANGER! The production is top notch, along with a verse from Pimp C (R.I.P.) and his partner in rhyme Bun B, the song is a must hear.

9MM/Speaker
Featuring Lil’ Wayne, Snoop Dogg, & Akon; Produced by Akon
This is the official lead single off the album where you have Weezy making his obligatory appearance along with Snoop and Akon behind the boards. The song is pretty tight; but I get tired of Akon on the hook.

T. I. Speaks (Interlude)
T.I. fills us in on the history of him and Banner.

Get Like Me
Featuring Chris Brown & Yung Joc; Produced by David Banner
The second single off of the album that has summer written all over it. You’ve heard this one before, if you haven’t, turn on BET and watch for about an hour and you will see it.

Shawty Say
Produced by David Banner
This is the supposed to be the third single off the album. Kind of funny that “Lollipop” gets sampled already. But Banner does a good job with the beat and the rhymes fit the beat. I have to say the ladies will love this one when it comes on.

A Girl
Featuring Dre; Produced by Cool & Dre
This song is terrible! SKIP!

Syrup Sipping (Banner Beat Break)
Produced by David Banner
Banner gets on the soapbox and speaks his mind for a little bit.

Hold On
Featuring Marcus; Produced by David Banner
Banner gives us a Pac style of song on this one. Banner just kept it “real” on this one, and it worked.

Cadillac On 22’s Part 2
Produced by David Banner
Banner goes back five years to make a sequel to one of his biggest hits “Cadillac on 22’s.” While he can never outdo the first one, the second one is soulful. I like it. Check it out!

Uncle Swac (Interlude)
Banner on the phone with his uncle recalling the story how he drove 751 miles with a sick baby Banner on a pound of “reefer” and a fifth of Hennessy. Uncle Swac sounds like a fun person to be around.

I Get By
Featuring Carl Thomas; Produced by David Banner
Banner takes an Isaac Hayes song and recreates a nice track on this one. The production and lyrics paint images and memories of the South on the song. CHECK FOR THIS!

Freedom (Interlude)
Really it’s a freestyle by Banner where he touches on some social matters. Banner stays giving it to you raw.

B.A.N (The Love Song)
Produced by  Warryn Campbell
This beat is TIGHT! This is the song dedicated to all those fuckboys out there. This is one that will get heavy play at all the clubs across the South. BANGER!

Fuck You Hoes
Featuring Jim Jones; Produced by Cool & Dre
Cool & Dre save face on this track with an assist from Jim who gives us his signature “Baaalllllin” at least 25 times. It’s a hot song with a nice beat on it.

Marz (Banner Beat Break)
You have Banner just playing around on a beat.

Faith
Produced by David Banner
Banner’s song about some trials and tribulations he went through. You have to like songs where the artist paints a picture. Banner recounts about his travels from Mississippi to New York and back that included his Astro van getting stolen in Alabama.

Wealth (Banner Beat Break)
Produced by David Banner
Banner gives you some Hip-Hop/Jazz just without the rhymes. DIG THIS!

Bottom Line:
David Banner delivered the best album of his career with The Greatest Story Ever Told. This album has two major slips ups and nearly six interludes. Other than that, this is a solid album. This album has something on it for everyone to listen to, which might help out with mainstream sales. This is an album that is worth the money to pick up with it being stacked from top to bottom. David Banner will surprise a lot of people when they listen to this album.