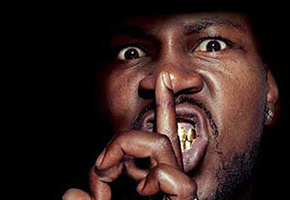 Since it’s been a slow week with the Hip-Hop news, I decided to do one of your favorite columns….5 Questions! This week we’re questioning DMX, Trick Daddy, T.I, Hip-Hop, and Anderson Silva. Let’s see what we can get out of these guys.

Question #1 What’s up with the Trick Daddy/Rick Ross feud?
I wonder where all this began? Miami is getting major “shine” in the game right now, but their two biggest stars are throwing shots at each other left and right. Why? The whole movement was built on unity, and now all of that is in jeopardy because of this. Didn’t you guys see what happened to the Houston movement? Wasn’t Trick featured on Rick Ross’ last album? Damn, it was all good a few months ago.

Question #2 Is Anderson Silva the baddest man walking the planet?
So now that I have started watching MMA (partly because of Kimbo) I noticed that Anderson Silva is a BAD joker! The way he destroyed James Irvin Saturday was impressive. I used to watch boxing, but with the corruption of the sport and the weak heavyweight division, my attention has shifted to MMA. How long before this sport is turned into a circus like boxing? As long as Don King stays away, the sport will be okay.

Question #3 What’s up with T.I.’s new song?I know he is softening this album up, but DAMN! “Whatever You Like” is one of his new singles off of his new album Paper Trail in stores on September 9th.  Now I know with his recent troubles he wants to repair his image, but don’t forget what made you. If most of the album sounds like this, I think I might have to pass on this album.  Tip’s still my boy by the way, but doesn’t he sounds like Shawty LO on this one?

Question #4 Doesn’t it feel like Hip-Hop is on the way back?
With all the recent good music we’ve been getting lately, it feels like the game is on the mend and getting back to health. You got Weezy moving good numbers, and you got some solid material coming from Nas. Hopefully the lull that has been hurting Hip-Hop is finally letting up.

Question #5 What is wrong with DMX?
When you were at the top of the world and now you can’t even get a phone call returned, things are really bad. When you get arrested 6 times in 3 months, you have a problem! DMX used to be one of the most gifted artists in the game (and one of the best selling) and now he’s shooting more mugshots than videos. DMX…get your shit together, not just for the music, but for YOU! He is turning into the black Amy Winehouse!

Well that’s that for this installment. Hope you enjoyed it. Maybe we’ll see you next time, maybe we won’t. But keep checking and remember, you can always hit us @ nappyafro@gmail.com!