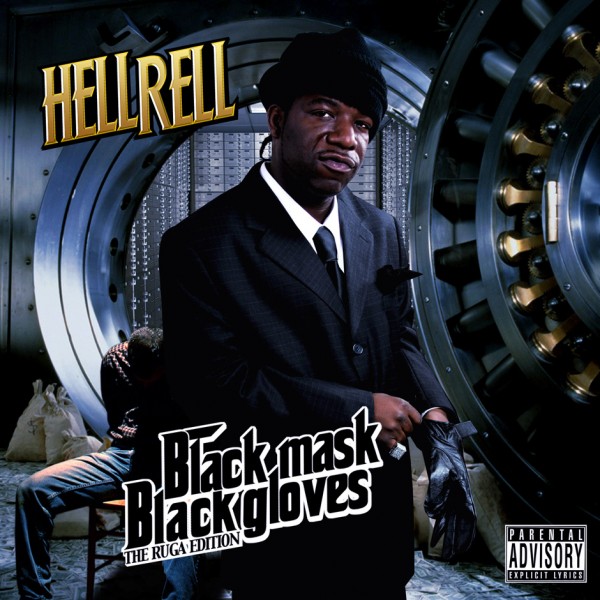 It’s funny. I never particularly liked Dipset but for some reason it seems like I’m always the one who gets stuck reviewing their albums (And believe me, those dudes stay putting out albums). But hey, you do what you must right? Hey, at least it an album from my favorite Dipset member, Hell Rell. I actually reviewed his debut album, For The Hell Of It, last year and although it wasn’t all that good, it still showed flashes of promise. To me, the thing that makes Ruga Rell stand out for other 2nd tier Diplomat members (Like 40 Cal, JR Writer, etc.), is his voice. He may style like Cam, Juelz, and Jimmy, but he don’t sound just like them. It the last few years, he’s also has gained a reputation of being one of the hardest rappers out. With all that said, let’s take a look at Rell’s sophomore outing, Black Mask Black Gloves (The Ruga Edition).

1. Intro (Black Gloves)
Produced by A. Raab Muzik
“I ran through thousands, I need a couple millions”. Ruga Rell gives you more of that gangster style he’s known for. I’ll give him that; on his last album he started out with a good intro also. The beat is something is you’d expect from a Dipset member.

2. Get Ready
Produced by A. Raab Muzik
The feeling of the track reminds me of something you would of heard in the early 2000’s; that not a bad thing. Over a heavy electric bass heavy track, Rell talks about ways he’ll get money; “I’m living by the mafia rules like Gotti would/I go broke do a sex tape with Megan Good/And sell it to Hollywood”. Funny, I would too.

3. Take An Oath
Produced by Manti
I guess it’s good to hear Rell talk about how money is not everything. Don’t think he didn’t cut the flossing talk though; “My birth certificate is a hundred dollar bill! My social security card is an ATM card!” He goes on the rap the not snitching rule and putting family and friends over everything else.

5. Come On Baby Girl
Produced by Hassiditty
With a title like “Come On Baby Girl”, you know this is a song for the ladies. The production sounds like something 9th Wonder would do. I think for Rell’s voice may be too pverpowering for the sample they use here also. When we get to the weak hook thought, that’s where he lost me at.

6. Realest Nigga Doin’ It
Produced by MGI
I don’t wanna sound like a broken record, but this sounds like something straight from Killa Season. Nothing really stands out here. I know more rap dudes lie about there reputations, but when you talk about shooting cops in the head or riding through the hood in a “’08 armor truck”, it gets to be a little much.

7. True Colors
Produced by Kajmir Royale
Erase my last statement abut the last track, this track sounds like something straight from Killa Season. But, with all my hating (Your words not mine), I can’t hate on the sample. It’s on some Rocky Balboa shit. One question though: Is every brother from Dipset a blood now? “Me and cash are like the Blues Brothers, but we play on the red team”. Just a question.

8. I Luv Stuntin’
Featuring Sen; Produced by Kajmir Royale
It’s funny; this song is supposed to be about stuntin’, but most of the verse is about fucking somebody up. The carnival beat is okay, but the song just has something missing. I could of done without the Max B impersonation on the hook though.

9. What Up
Featuring JR Writer; Produced by Hell Rell & Hassiditty
With all the questions surrounding the Dipset’s unity, I guess it’s good to have a collaboration with a member. Too bad the song is boring. The beat has a generic feel and the lyrics aren’t anything we haven’t heard before.

10. Push ‘Em Back
Produced by Goodwill & MGI
I guess this is Rell’s attempt at a club track…or maybe it’s an attempt to get ringtone sales. I swear if you combine “Lip Gloss”, the Beastie Boy’s “Paul Revere”, and dumb down lyrics, you’ll have what Hell Rell tried here, Not a good look at all.

11. Rumors
Produced by A. Raab Muzik
Just like JR Writer did earlier this year, Rell tries to clear the air about his crew’s current status. I applaud him for actually admitting that there was a problem. But at the end of the song though, you realize he really didn’t put any rumors to rest. The beat and the lyrics sounded kinda thrown together too.

12. Million Dollar Plan
Produced by Kajmir Royale
Hey, at least Rell didn’t end the album with an obligatory “I know I just killed a 100 niggas on this album but thank God for helping me make it” track. He sticks with what works for him and at the end he has a solid track. The horns on this one and the loop work well.

Bottom Line:
Hey, I won’t shit you here. Most of the Diplomats affiliated albums released in the last 2 years have not been groundbreaking and the same can be said about this album. Not saying it wasn’t good. Ruga Rell definitely had some good parts. The one problem here is that Rell has yet understand that the outstanding rappers rhyme about more that just guns, sex, and money. Rell has style, reputation, and talent. But until he stretches outside his comfort zone, he’ll never get past where he is now.