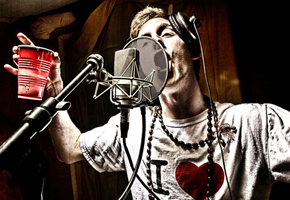 First of all, let it be known that we fucks with Tha Carter Cartel. We’re friends with a lot of other sites, but we FUCKS with Tha Carter Cartel. When Derek hit us up and slid this Asher Roth interview our way, you know we had to show love. Check out this excerpt and find out about SRC Records and Steve Rifkind’s newest sensation…then head over and read the rest.

Tha Carter Cartel: What’s good Asher? How you livin’ these days?
Asher Roth: I’m good man, it’s been cool in Atlanta but I’m still kinda bummed out cause it’s the worst month to be in here with the mosquitoes and the heat. So you know, being a fair skinned-white kid I spend most of my time indoors man, but it’s all good.

TCC: (Laughing) That’s what’s up. We understand you just moved your life “Entourage” style to the ATL and have been hanging out with the likes of Ludacris and OutKast. How’s that been, and how you like the ATL besides those fucking mosquitoes?
AR: It’s been cool, the main reason I moved to Atlanta was for networking, and you know it’s kind of the epicenter of what’s going on right now. It was a no brainer to move out of PA and get myself down to Atlanta for a little bit, so it’s cool getting to link up with some of these people you see on TV all the time. It’s been incredible man, but I mean it just started, you know, the journey is just beginning.

TCC: So you just signed to SRC Records and Steve Rifkind, what kind of shit have you guys been getting into?
AR: (Laughs) We’re working on the LP right now but we’re always doing different projects. It’s obviously a very visual world we live in, so I’m always doing different videos and stuff like that as well. I pretty much film everything too. Something that happened is that I’m comfortable within my own skin so I have no problems when the cameras are on and the lights are on. I’m not putting on an act and I think that’s what’s important about the music as well; this is very authentic, organic music. With this world that we live in with YouTube, and this and that, I mean I said let’s just throw the camera on and let people into my world, you know, not only can they experience the music but they’ll be able to experience the video as well.

TCC: That’s real man, that’s how you gotta do it in this new era. So listen, we noticed you’ve been in the studio with Nottz, can you tell us anything about that?
AR: Yeah man I just got back from Virginia working with Nottz, he is an absolute beast, and we did some crazy, crazy stuff. I’m always trying to out [due] my last record cause I think that’s kind of the competition I hold with myself; if I wrote a dope song, the next song I want it to be doper than that. So I went out to Virginia with Nottz and we did some really interesting and different stuff that I’m really excited about. We’re talking about featuring some people, I’m gonna keep it a surprise though. But uh we got a really dope record with a really dope artist that’s gonna surprise you guys, I’m excited.

TCC: Damn man we can’t wait for that shit. So somehow before all this started you realized you could rap, when was that, how’d it happen?
AR: I mean I wasn’t raised on hip-hop; hip-hop was the last genre to really be introduced to my family. My older sister listened to the pop sensations like New Kids on the Block and shit; my middle sister she was into like punk rock and indie rock; my dad was Dire Straits and Bruce Springsteen and the classic rock; and then my mom was more about the Temptations and the jazz and the soul music. So there was no hip-hop in my house, but by the time I reached 13 or 14-years-old, you know I kinda picked up on it, which was like 1998, so I got into hip-hop really, really late. I mean the first [hip-hop] CD I bought was Jay-Z’s Vol. II, and when that Annie anthem came out I was like damn this shit is like a Broadway play, and he flipped it and that was real wild for me. Then when I was about 16-years-old I linked up with my buddy Brian Sellers and I used to beat-box and rap a little bit, and finally I was like, “yo, I think I can rap”. I just hung out in my room with like a tape recorder and shit, I mean I think every suburban kid does it you know, they just hang out and they rap, and I just happened to be good at it, so I ran with it. Senior year we ended up putting out a makeshift CD, recorded on our computer with a fucking $10 microphone, and we sold 250 copies in two days. And then in college I stuck with it and did the same thing in my dorm room. I won a talent show and shit, and whatever, I was never trying to get a deal, it wasn’t like “I wanna be a rapper,” it was just how I liked to spend my spare time, and something I really thoroughly enjoy to do.