Boomin’ From The Stoop: I Can’t Believe It! 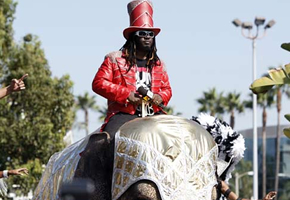 That’s right, it’s time for yet another Boomin’ From The Stoop with ya boy H2O. I was watching BET, when I saw T-Pain’s newest video, “Can’t Believe It”. I actually really like it, though to be honest, I’m probably really bias; before I joined up with the nappyafro crew, I was one of their biggest fans; there from almost the start of the whole thing. But what made me show up at their website was their review for T-Pain’s Epiphany, which had just come out at the time, and I was wondering whether or not to pick it up. I was a HUGE T-Pain fan back then, by the way. When I saw B-Easy or King Jerm, whoever did that review, gave Epiphany a 1.5 out of 5 stars, I was shocked and pretty pissed off. I picked up the album anyway, and I realized that they were right! I was checking out the website everyday from then on and here I am now!

Anyway, back to the video. I like it because it reminds me of the “Good Life” video with Kanye West; in a way, it’s kind of a darker video but it has a nice vibe to it. I’m not gonna front though; Lil’ Wayne’s verse on this song is absolutely horrible, mostly because I have close to no idea what he’s saying. And another thing: ladies, why do ya’ll think Lil’ Wayne is good looking? When I saw this video, my mom walked into the room and remarked Lil’ Wayne looked like a monster! Dark Angel, you wanna help me out on this one? Listening to Lil’ Wayne spit on this track pretty much reinforces what I’ve been saying for a while; he desperately needs to take a break: dude sounded like he was in another solar system! I mean, you just got done with a 2X Platnum album, go take a vacation and don’t come back for a year or two. Make us want more so we don’t get tired of you. But that’s just how I feel; I’m not a Weezy hater, I respect his hustle and all the women he gets. Just giving him a suggestion.

To end this on a lighter note, we got some great releases coming up in September: Jeezy’s talking about The Reccession, LL releases his last album, Nelly tries to make a comeback, Kardinal Offishal’s debut on Konvict Muzik, Common’s first of two albums this year, and last but most certainly not least, Tip turns in his last, most personal album ever, Paper Trail, before he has to go to jail. Finally, I get an album that is guaranteed to be at the very least decent. There are some more all-star releases to look out for this month, so keep your eyes peeled for them.

Sorry, I got a little sidetracked there. Without further ado, here’s “Can’t Believe It”, T-Pain feat. Lil’ Wayne. Straight from the Stoop!