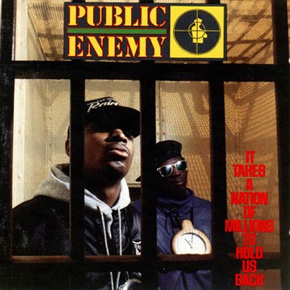 Before Lupe Fiasco & Kanye West, before The Coup & Immortal Technique, and even before Common & Nas, Public Enemy was the first group to mix political/socially conscious lyrics with instrumentals full of samples and heavy bass. To have an Ice Cube, or a Paris, first you need a Chuck D, to have Just Blaze or Timbaland you need The Bomb Squad, and lastly Public Enemy would never be the group it is today without Flavor Flav, useless or not, he partly creates the unique sound that made PE relevant today. Let’s go back to 88′, 10 years after Afrika Bambaataa established Afrocentricity in Hip-Hop, his influence had declined and Hip-Hop and it’s subject matter was being carved by 5 “Niggaz With Attitudes” who saw insane commercial success rapping about “money, hoes, & guns” (the rims would come later). On the opposite coast, Rick Rubin and Def Jam held the threshold of successful rap records and picked the winners by hand. At the same time, just as Def Jam was losing it’s reign at the top, the second coming of Grandmaster Flash and The Furious Five was quietly recording records in Long Island. Def Jam quickly scooped them up, released “Yo! Bum Rush the Show” and grew confident in the socially conscious group. Just a year later, Chuck D, Flavor Flav and company released their second album under a more controversial name: It Takes A Nation Of Millions To Hold Us Back… the two protagonists behind bars. The album was met with positive acclaim, eventually peaking at #42 on the Billboard Top 100. Then years later, people really began to appreciate this album for what it is; a modern masterpiece.

The first thing you’ll notice when you give this CD a listen is the bass-tastic instrumentals and Chuck D’s controlling baritone voice. Beyond that, The Bomb Squad did a great job sampling and controlling FLAVA FLAVVVVVV’s random outbursts to a bare minimum. Chuck laces the wax with insane lyricism: “From a rebel it’s final on black vinyl/Soul, rock and roll comin’ like a rhino/Tables turn/ suckers burn to learn”. And my personal favorite: “Never badder than bad cause the brother is madder than mad/At the fact thats corrupt as a senator/Soul on roll, but you treat it like soap on a rope/Cause the beats in the lines are so dope”. This album is a seamless combination of Chuck D’s ardent pro-black lyricism and The Bomb Squad’s innovative and eventually influential production. What more could you want than an album that’s a great listen from 1-16?