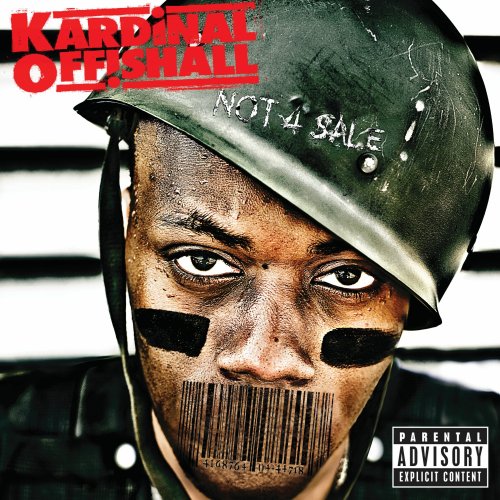 There’s one reason why I took this album review: before a year ago, I had no idea who Kardinal was. Then I heard him perform a cipher freestyle with Stat Quo and Cassidy, and I was searching everywhere for this guy. He definitely had skills, anyone with ears could hear that. But all of his albums had been released in Canada, his country, and I didn’t feel like downloading them or searching for them. Then Not 4 Sale came out and I jumped right on it with an open mind. Will Kardi bring his A game? Let’s see.

Burnt
Featuring Lindo P; Produced by Shea Taylor
This is a straight up-reggae song, even though there is rapping. The beat is outrageous, and the hook goes with the beat very well; a good start to the album: it just starts, no introduction about what the album is about, just fiery lyrics and a bumpin’ beat. The last minute is a skit about some teenager I guess being sent to live with Kardinal because of bad behavior. You just hear the teenager bitching and moaning about going. Just skip this part and the song is good.

Set It Off
Featuring Clipse; Produced by Boi-1da
When the beat first dropped, I could hardly believe it. I had to restart the song from the beginning to hear the beat drop again, and then I finally had my mind made up: THIS SONG BANGS!!! When I say bangs, I mean harder than anything you’ve ever heard before. Kardi spits a blazing 16, but the line of the song goes Malice: “Superstar like Lupe/See me in the coupe, hot damn it’s a new day/I remove the roof like it’s a toupee/Shed light on the jewel, view ’em in Blu-Ray”. Nice. Check this one out, you’ll keep this on repeat. At the end, some wierd lady keeps talking and saying Hello. I have no idea what she’s saying. Like the last song, skip it and this shit bangs.

Dangerous
Featuring Akon; Produced by DJ Kemo & hAZEL
First single from the album, you’ve most likely heard it before; another one of those Akon songs on the radio. It’s really nothing special, Kardi is good but he’s just okay, Akon is the real draw, but his voice is really annoying to me and I’ve heard this song way too many times.

Digital Motown
Featuring J. Davey; Produced by Jake One
I can truthfully say that this is probably my favorite song on this entire album. I love this song! Kardinal spits Twista style on the rap bits, and it slows down for J. Davey to sing her part. I have no idea who J. Davey is, but she sounds amazing. Her voice is great, and Kardi still gives it a reggae feel, even though it’s kind of a futuristic motown kind of beat. I keep this on repeat all the time, you have got to check this out. Only flaw is the woman who says “Hello” at the end. It seems like stupid skits seem to turn up on all good songs…

Gimme Some
Featuring The-Dream; Produced by Boi-1da
I don’t like The-Dream, and he and Kardi don’t go together well at all. SKIP!

Bad Like We Bad
Produced by Kardinal Offishall
Another song that is clearly reggae influenced, but that’s not a bad thing. Kardinal shows he can produce a lil’ bit too with this one; it sounds really street ready. Not a banger, but it’s still good. The hook is great too: “Bad like we, bad like we bad/Bust up the place Brooklyn to Baghdad.” It’s catchy, but I wouldn’t say it’s one of favorites: you can tell it was meant to be filler.

Numba 1 (Tide is High)
Featuring Rihanna; Produced by Supa Dups
This was what I was waiting for; the two go together perfectly on this one. It’s basically about Kardi in the club and this girl keeps trying to get with him but he’s “married to the game.” It’s a real good look, those two together, and it sounds great. The reggae thing works great here too because the two of them both know how to pull it off. Bottom line, everything just works, check it out!

Ill Eagle Alien
Produced by Nottz
Kardinal, what happened here!?!? The beat is horrible, and his singing on the hook is awful. Even worse, there is a skit on this one too! SKIP SKIP SKIP!!!

Nina
Produced by Supa Dups
He comes back to life with this one. This one sounds like something Bob Marley would do, to be honest: Kardinal sings the hook and the song really well, and the beat is really laid back. This is a song you’d play just to chill out. I’d keep this on repeat too, good work!

Go Home With You
Featuring T-Pain; Produced by Kardinal Offishall
Kardi grabs labelmate T-Pain for this one, and at first I was kind off iffy on this one; the “La, la, la, la, la, la” in the background is annoying at first, but T-Pain’s crooning on the hook is the main draw. I don’t know why, but Kardi lost his accent on this one and sounds just like he was born in New York or something. But overall, let the track grow on you and you’ll enjoy. Good.

Going In
Produced by Alex Da Kid
This is basically the lyrical song of the album: Kardinal is spitting some much shit on this one. “I wrote this in the whip, one hand on the wheel/Eye on the law, ten dreams for the deal/I don’t need street cred, I’m street readily available/Favorable, put all ya’ money on the table.” Whoo! The beat is bare bones, but that’s the point; nothing but hot lyrics for yo’ ass, like Jay-Z did with “Blue Magic”. I’m still banging that song, by the way. This is a great song, probably the best on the album.

Bring The Fire Out
Produced by Boi-1da
This definitely could have been left off. The beat is hot, the lyrics are sizzling, but the boring hook is lazy and immediately drives you away. SKIP!

Family Tree (Still Eyerize)
Featuring Glenn Lewis; Produced by Kardinal Offishall
This is without any doubt the best song on the album. Glenn Lewis sings the hook and kills it, and Kardi flows on it like a pro. What’s even more amazing is that he produced this track himself! This track is amazing: it switches from Reggae to Soul styles on the fly everytime Kardinal and Glenn go in. You have got to check of this one: if you don’t like this song, then there’s no changing your mind about Kardinal.

Due Me A Favour
Featuring Estelle; Produced by Kardinal Offishall
This song is pretty good: it’s a story rap about a guy whose on hard times, working as a construction worker and making barely enough to support his family, asking for God to do him a favor. He and Estelle both duet on the hook, and Kardi’s storytelling is great. The last 2 minutes is another skit. But wait: this one is actually good! It’s the kid from “Burnt” (track 1) asking Kardinal to kick him a freestyle. He does, and it’s FIRE! “Be like the white folks, invest that shit/Instead niggas is clownin’ on the red carpet”. And my favorite of all: “Growing up poor don’t make you ignorant/Act your age, don’t act your pigment.” DAMN!! Check for this one!

Lighter!
Produced by Boi-1da
This track is basically “Burnt” part 2, minus the skit. The beat is a little more carribean, but other wise it’s basically the exact same song you listened to at the beginning. I guess that’s an okay way to end an album.

Bottom Line:
It feels good to finally have a decent album to review after all of the bullshit I had to listen to. Kardinal is great rapper, and this was definitely a good album. I will say this though: most of it is a reggae-influenced Hip-Hop, so if you aren’t into that, you won’t like this album at all. However, if you love Bob Marley, you’ll love this album. Kardial shows skills beyond that glimpse of what we got at the 2007 BET Hip-Hop Awards, and proves to be one of the best artists on Konvict Musik right now. Only thing is that this album will do horribly when B-Easy puts the Number’s Game up due to lack of promotion. Support, Support! Pick up some good Hip-Hop with Kardinal.

nappyPicks: The whole album is worth it; there’s only like 3 skippable songs. Support Hip-Hop!