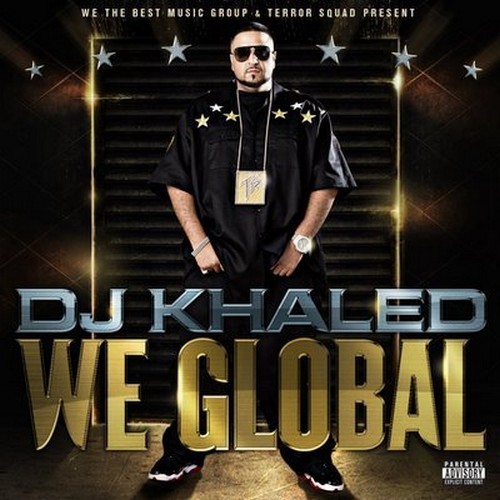 For a few years now, it seems like DJ Khaled is every hot rappers’ new best friend. Armed with the fortune of reppin’ from the hotbed of Hip-Hop right now (Florida), Khaled is most known for getting the most premier rappers together on songs (As well as yelling at the top of his lungs “We the best!” constantly). Now he’s on the verge of releasing his third album, We Global. With a new Def Jam label deal in hand and a new rapper to promote, Khaled is attempting to take it to next level. Let’s take a look at Khaled’s major label debut…

1. Standing On The Mountain Top
Featuring Ace Hood & Pooh Bear; Produced by Beat Novacaine
Over a epic sound, Khaled does this sort of spoken word/rapping thing before introducing you to his artist Ace Hood. Personally, I’m still up in the air about Ace. It’s funny; he almost did exactly this on the intro for his last album We The Best (take out Ace and put in Rick Ross). He produced that track too. It’s an okay track, but it could have been harder.

2. Go Hard
Featuring Kanye West & T-Pain; Produced by The Runners
“I think its time for me to go hard as the hood I’m from”. I honestly didn’t feel this song when I picked it for Song of the Week in August. Well, now I fucking love this song. All vocoder shit aside, I think sometimes we forget that T-Pain & Kanye are actually really talented. With this hook T-Pain made me remember why I liked Plies’ “Shawty”. Kanye gets gutter while The Runners provide a hard beat. I’m only gonna say this once; best song off the album.

3. Out Here Grindin’
Featuring Akon, Rick Ross, Trick Daddy, Ace Hood, & Plies; Produced by The Runners & Akon
Every year, Khaled drops a big posse cut song; this is it. While not bad, it doesn’t compare to Khaled’s previous works like “I’m So Hood” or “Brown Paper Bag”. It also lacks the A-List star quality (They should have kept Jeezy & Weezy in). It’s still not a bad song; it’s just toned down.

4. Go Ahead
Featuring Fabolous, Flo Rida, Fat Joe, Rick Ross, & Lloyd; Produced by The Runners
I think The Runners make great beats, but their trademark “breathing” sound effect gets annoying three times in a row. When I saw Lloyd on the track I automatically new this was one for the ladies. It’s kinda catching but very forgettable (especially the generic beat). Which is a shame because I feel Fabolous has been killing it lately. Besides him, it seems like everyone spits the same tired player lines from their previous outings.

5. I’m On
Featuring Nas & Cool; Produced by Cool & Dre
I remember when this song leaked earlier this year and everybody thought it was gonna be on Nigger/Untitled. Man, the bloggers were pissed off! But really I don’t mind this one at all. I don’t mind Nas flossing on the song because that was a part of his career too (“Money fall out the sky when I speak/Gotta valet, can’t leave mine in these streets”). For some reason the beat reminds me of “Owe Me” or something like that. It’s not Nasir’s best, but I didn’t mind this song either.

6. Red Light
Featuring The Game; Produced by The Inkredibles
I think Game is sometimes at his best when he is just talking shit. This is basically what he does here. The production from The Inkredibles is solid and samples Joe Simon’s “Trace Your Love” (9th Wonder also used this sample on Memphis Bleek’s “Alright”; I love that song). The Game continues his Jay-Z stalking and kinda calls him out here a few times (“Jay is Jay but to win that you gotta show me/Matter of fact, Young Hov gotta show B”). Game just being Game.

7. We Global
Featuring Fat Joe, Ray J, & Trey Songz; Produced by The Runners
For some reason, Khaled feels like it’s good idea to put two R&B singers on one track but formulate it like a rap song. Plus it’s not really a song for the ladies either. Also, not to sound like a hater, but why do people keep giving Brandy’s little brother work? Songz turns in a good hook, but this one wasn’t for me.

8. She’s Fine
Featuring Busta Rhymes, Missy Elliott, & Sean Paul; Produced by Danja
For some reason a track with Missy and Sean Paul on it together sounds really outdated. I respect what Missy had done in the past but her rap style here just seems old now. Busta doesn’t have enough to save this one either. The beat has reggae influence but… You know what? SKIP!

9. Final Warning
Featuring Rock City, Ace Hood, Blood Raw, Bali, Lil’ Scrappy, Shawty LO, Brisco, & Bun B; Produced by The Inkredibles
The Inkredibles go 2 for 2 as far the beats provided for this album. Even though the list of rappers are mostly second class, Bun keeps his consistency and turns in a good verse, Rock City does a good hook, and Shawty LO…well Shawty LO is just awful here. I don’t know what the fuck they were thinking.

10. Fuck The Other Side
Featuring Trick Daddy & Dunk Ryders; Produced by Gold Ru$h
“Cause bitch I’m live!” I’ve always liked Trick Daddy; it seems he’s always made a certain kind of music and stuck with. The beat provided by Gold Ru$h here is surprisingly hot (Seeing at how I doubt this one will be a single). Trick Daddy handles the hook and the last verse while his new crew the Dunk Ryders handle the first two verses. Trick does his thing while I’m not so sure about the Ryders. This is song is worth checking out.

11. Bullet
Featuring Rick Ross & Cham; Produced by DJ Nasty
On paper the match up of Ross & Cham doesn’t really look good. But when I listened to the track, it actually works. The beat is a hybrid of reggae and Hip-Hop with hand claps and sirens; it gives Ricky room to do his thing while still giving Baby Cham room to do his. The “Whhooooaaaaaaa!” sample in the background has that Shyne “Bad Boyz” feel also.

12. Blood Money
Featuring Rick Ross, Ace Hood, Brisco, & Birdman; Produced by Isaac Opus
It’s something about this track that just didn’t grab me. All the rappers here turn in a verse with Ross also doing the hook as they talk about their love for drug/blood money. I’ve heard Brisco a few times but does this guy really have a fan base? The track as a whole is boring.

13. Defend Dade
Featuring Pitbull & Casely; Produced by Diaz Brothers
Mr. 305 and R&B singer Casely close out We Global. It seems like Khaled is limping towards the finish line (He doesn’t even yell on the last 2 tracks…is that a bad thing?). I expected a track like this; Khaled always has at least one track on his album that gives love to Dade County. This particular track sounds more like a track you’d hear on Pitbull’s album. Not bad; just more like filler.

Bottom Line:
DJ Khaled’s albums are kinda like some big budget summer movies. They have big names and special effects, but when you actually go see them they just don’t live up to the hype. What’s also weird here is that DJ Khaled didn’t bring out as much star power as he’s have on his previous efforts (Where’s Lil’ Wayne, T.I., or Young Jeezy?). If you’re not bringing a cohesive album, at least give me that. Not to say that he doesn’t bring in some hits; Khaled still has the ability to put together a big posse cut. Still, he’s has to remember that the features on a song don’t make the actual song…the song does.