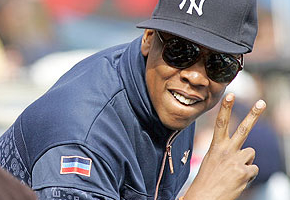 I think Jay can call American Gangster a success with all the buzz he has now: there have been so many rumors about him ever since he left Def Jam and signed that 150 Million dollar deal with Live Nation, called “Roc Nation”. For many Jay-Z fans, rumors are everywhere, and no matter how many times you hear them, or how appealing they sound, you just gotta ignore them, because more likely than not, Jigga doesn’t even confirm them himself. Well, looks like things are going to change here, because Jay just officially announced his latest Record Label!

It’s a partnership with the production duo StarGate, who are famous for producing hits like “Irreplaceable”, “Closer”, “Because of You”, and “Don’t Stop The Music”, and the new Super Label will be called: “StarRock”. That pretty much explains his line in Jockin’ Jay-Z: “That Bloke from Oasis said I couldn’t play guitar/ Somebody shoulda told him I’m a fucking rock star.” As for StarGate, they are pretty good producers, but I really didn’t think Jay would team up them. I mean, Jay’s never jumped on a StarGate track except for “Bye Bye” off Mariah Carey’s album. Maybe that will change after Blueprint 3?

Speaking of Blueprint 3, Jay is supposed to be working on a new remix for “Swagga Like U”s feat. Nas, Andre 3K and Jeezy. If that’s true, then sweet! Also, it is rumored that the album will be released on December 2nd. Because Kanye decided to release his album earlier in November, that completely rules out any chance of a Jay-Z/Kanye Showdown.

One more thing I wanted to point out: I went to Roc-A-Fella.com recently, and saw a HUGE ad for Kanye’s new album. This is technically still Jay’s record label: why is he playing second fiddle to Kanye? Has he finally accepted the fact that Kanye is simply more popular right now with the rap fans, or is just because his album is coming out earlier?