Rappers Who Should Have Movies Based On Their Lives 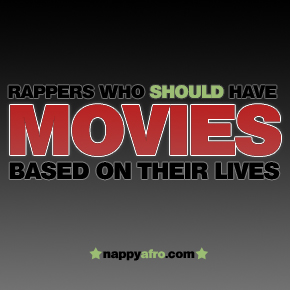 With The Notorious B.I.G. biographical film Notorious scheduled for release on January 2009, the obvious discussion comes up about what other rappers have big screen worthy life stories. I mean, we kinda had that with 8 Mile & Get Rich Or Die Tryin’. But those movies where loosely based on the lives of 50 Cent & Eminem; that’s also the same case with Krush Groove. I won’t even get into VH1’s Too Legit: The MC Hammer Story. But the thought of what biopics could be made about certain rappers are tempting…

Think about it; a Disney backed movie about the kid who made the whole world say “Yoooouuuu!” It’s not as crazy as you think; you could possibly make it a musical and try to get that High School Musical cash: “Watch as DeAndre Ramone Way goes from high school zero to the ‘Superman that hooooooo’” See, it basically writes itself.

Based off the book of the same name, this movie chronicles rapper Ma$e’s transformation to Pastor Mason Betha…then back again to Ma$e….then back again to Pastor. Don’t laugh; this idea isn’t that terrible especially seeing how well the Christian film Fireproof did this year (Budget: $500,000, Earnings: $26,429,043+). Connect Tyler Perry to this project and I hear cash registers from the religious folk. Should they mention the transsexual incident?

After seeing the documentary this year (The World’s Most Dangerous Group), I’m sure that there have been talks about this project. There many subjects to touch on besides the group rise to super stardom (Ice Cube leaving the group, the FBI letters, Suge Knight jacking up Eazy-E, that bullshit about Snoop joining the group, etc). Hey, it’s already been parodied in CB4; might as well make the original.

This one actually has some elements that could be good: Chicago kid has dreams to be the biggest Hip-Hop star in the world, drops out of art school to pursue said dream, struggles at first, moves to New York, gets a little fame, gets in a car wreck, gets more fame…you know the rest. I not even gonna speak on the emotional loses. Who gonna play Kanye? Do you think Kanye West would let anyone else play him? “George doesn’t care about Black people…but he might love this movie”

At first I thought this would be a good idea but after thinking more about it, I don’t know. Yeah he raised lyricism in Hip-Hop to a new level but I don’t think his persona will make the best film. Rakim leaves for 5 to 8 years at a time; how do you end that movie? “Rakim dropped an album in 1999, sign with Dr. Dre’s Aftermath, did a few cameos, sat on the sidelines for years waiting, uh, that’s it”.

If anyone says that Killa Season was a biographical film on Cameron Giles, well, that just sad. Let’s just go with the facts: He did have hoop dreams at Manhattan Center High School, that didn’t work out which led him to music that eventually led to the formation of The Diplomats (Maybe we can finally find out what happened between him and Jim Jones). Throw in some cameos from Big L and Murda Mase, and we might have a story.

This won’t be a PG-13 version of the Run-D.M.C. story; we talking about everything here: groupies, drugs, and even the sad murder of Jam Master Jay. They were the first mega superstars of Rap so I know it’s not all clean as Run’s House makes it. Now, if only we can get Rev. Run to sign off on this…

Even though J-Dilla isn’t a household name, I think that could actually help the movie. I watched plenty of biopics and didn’t necessarily know the whole story and history about the subjects. From working with everybody from Janet Jackson to De La Soul, winning a Grammy, to being Common’s roommate right before dieing of TTP, this movie has a lot to cover. Being that he was a major influence on his peers and that he embodied the neo-soul sound, I’m sure a lot of Hip-Hop heads would love to see this one green-lit.

Does anybody remember The Black Book that Jay-Z was supposed to release right around when The Black Album dropped? It was suppose to be a book about his life. I read a few excerpts right before it got canned and they were actually pretty good. I think a lot of people would love a glimpse into the life of one of Hip-Hop’s most successful (and private) stars. We got action (He shot his own brother!), romance (Who’s playing Beyonce?), and betrayal (R-O-C). Maybe it can end with him either getting married or standing on stage with…oh and he did get Nas’ baby mama pregnant; even more drama.

Snoop has truly lived the “Hip-Hop” life. After growing up in Long Beach, California, Snoop went from hustling in the hood to being the face of one of the most infamous record labels of all time. We all know about the highs and lows of his life because Snoop has been in the limelight over 15 years and has transformed before us. His story could be a comedy, a drama, and a suspense film all in one. I’m thinking he collaborates with Seth Rogan to make this one. The movie will be a mainstream hit because everyone loves Snoop!

This one is kinda obvious; after about a million straight-to-DVD movies about the life of one of the generation’s most controversial figures, it seems like he might finally get his turn to the proper Hollywood treatment. Last year it was announced that EverGreen Copyrights has acquired the rights and supposedly are producing a film. Preston Holmes (Hustle & Flow producer) is rumored to be connected so it might be good; if it gets a talented director plus a good actor playing Tupac, I’ll be more optimistic.