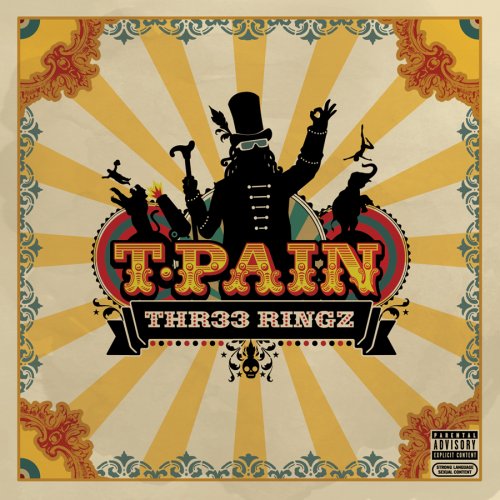 Yup, T-Pain is back. Wait, did he ever really leave? Just like Weezy, T-Pain has over-saturated the game constantly: he openly admits it and treats it like it’s his job. That said, T-Pain’s albums have always been…alright. I mean, the singles from the albums are almost always banging: “I’m N Luv (Wit a Stripper)” and “Buy You a Drank” have both been on my playlist for a long time now. Still, as a whole, they aren’t really that solid; he always seems to let a few songs slip through the cracks. Well, now Thr33 Ringz is out; can T-Pain prove he’s more than just a hitmaker? Let’s check it out.

Brand New Show
This is just a skit to start the album: a couple of guys complaining about running the circus stuff. It doesn’t really get me in the mood, but T-Pain’s voice is funny; you can tell which one he’s playing.

Welcome To Thr33 Ringz
After a quick shout out to the Nappy Boy Ent. label, T-Pain launches into a rap just to start out the album. I really don’t think Pain is the best rapper. He uses punch-lines that aren’t the best: “They think a niggasandwich”. slicker than a mayonnaise Still, the beat is bumping! I wish I had the instrumental. At the same time, it’s less than a 2 minute song; by the time you feel like skipping it, it’s over.

Ringleader Man
I remember T-Pain performed this song at the BET Awards 2008, proclaiming himself to be the “Ringleader of this Rap Game”. This song got me really excited for Thr33 Ringz, and it’s awesome. It’s really a melodic song, and while I’m not completely sure, I think T-Pain didn’t use the auto-tune for this. If that’s true, wow! He’s actually not bad of a singer without it. The beat is dark, but it all works well. One of the standout tracks on the album.

Chopped & Screwed
Featuring Ludacris
I think this should have been the first single off the album. It’s all about men getting blown off by women, and as a teenager, I’ve had experience there. T-Pain commands the track well, and it sounds like the circus theme that he’s been trying to get with this album. Luda spits a good verse to add to the song; his lyrics haven’t really wowed me lately with his new album. However, that doesn’t diminish the quality of this song. It’s great, and another one of the top tracks off the album.

Take A Ride (Skit)
Yeah, time for another skit. T-Pain’s voice is still hilarious as he plays the circus worker chilling in T-Pain’s Cadillac with his buddy. They go for a ride in Pain’s Cadillac, talking about going to this strip club, when the dumbass riding with the circus worker burns the guy’s hand while smoking, causing them to crash Pain’s Cadillac. This skit is hilarious, period. I listen to this one a lot, it’s much better than the other ones.

Freeze
Featuring Chris Brown
After “Kiss Kiss”, let’s just say that my expectations were high for this song. While it isn’t exactly “Kiss Kiss II”, it gets the job done as the “get up and dance” song. Teddy’s crooning on the track is superb, and Chris sounds good on here: the two of them actually make a formidable duo. This was recently released as a single, it should do well. Not as well as “Kiss Kiss”, but good.

Blowing Up
Featuring Ciara
This feels like “Bartender II”, to be honest. It’s weird, but for some reason it’s got that vibe, even though the beat and the track is a lot slower. Ciara and T-Pain sound really good together on this track because their voices mesh together very well. At the same time, it ends up being just an OK song; not one I would really put on repeat.

Can’t Believe It
Featuring Lil’ Wayne
I think I already covered this song when I did a column on the music video for this song. T-Pain’s choice for the first single was good, as this single’s performance proves. I was expecting something that was going to be as huge as “Buy You a Drank”, but hey, #7 on the Hot 100 ain’t bad, and not every song can beat “Whatever You Like”. Lil’ Wayne’s verse is actually awful; at first I had no idea what he was saying, but now that I do, I can say without a doubt he’s better than this. I mean, rhyming “doing” with “ooing”? Man, that’s some Shawty Lo shit! Even if you a Weezy fan you can’t tell me that wasn’t weak. Still, he doesn’t bring the song down, though he doesn’t add to it either.

It Ain’t Me
Featuring T.I. & Akon
Finally! I’ve always wanted T.I. and Teddy to work together. It’s basically talking to all these girls who run up on all these dudes ask for stuff. As T.I. says in the beginning of the song: “It ain’t what I can do, it’s what I will do.” This coming from the man who made “Whatever You Like”? Anyway, this song is really good; Akon sings kind of whatever; he is continually getting overshadowed by T-Pain. T.I.’s verse is really like his Paper Trail verses: it’s good to see that even after his last album he’s still writing stuff down. Really good track, it stands out from the others.

Feed The Lions (Skit)
The “Circus Worker” is back here, bitching about how his pay and how much he does. He tells a story about how a lion who was under fed, ate up three little white children after they threw popcorn at it and T-Pain blamed him. Then T-Pain comes out straight up yelling at them for smoking in his Cadillac. It’s pretty funny to hear Pain arguing with himself. Not a bad skit.

Therapy
Featuring Kanye West
This is my favorite track on this whole album, even though the lyrics on the track are a little questionable: “5,6,7,8/ I don’t need your sex I’ll masturbate.” No comment there. It’s basically just about T-Pain getting over this one girl. Kanye jumps on the track as well. When I first saw his name, I was kind of worried. Would it be the 808’s and Heartbreak Kanye, or the Graduation Kanye? Kanye is actually rapping on this track, and man, it’s a breath of fresh air from the singing he’s done. Kanye MURDERS this song. In fact, I’m not even going to put any lines from his verse up because I’d have to put the whole thing up. Just check this out!

Long Lap Dance
T-Pain here is basically making a song for all the people out there who hate short lap dances. Because of that, he makes a song that is pretty long for the lap dance crowd. This song is kind of a quiet slow jam for the ladies to do their thing, but as a song it’s really not that good.

Lorraine (Interlude)
I just don’t get the point of this skit. It’s a British guy (Yeah, a British guy) who calls up Pain claiming to have fucked his girlfriend Lorraine. T-Pain then responds that the girl Lorraine is NOT his girlfriend at all. Yeah. SKIP! On a side note though, T-Pain says in the skit he has 11 #1 records this year alone. Damn! Get ya money man!

Reality Show
Featuring Musiq Soulchild, Raheem DeVaughn, & Jay Lyriq
This also could have been a single. It’s like a super-R&B collabo with T-Pain, Soulchild, DeVaughn, and Jay Lyriq all singing one verse with T-Pain doing the hook. I feel like though they all gave great performances, Jay Lyriq kind of sticks out as being the weakest link of the group, which I understand since he’s only been on songs with T-Pain before, never releasing any albums or even singles before. The strongest performance is definitely Raheem though; he did his thing for sure on this track. Overall, great song.

Keep Going
T-Pain throws the auto-tune away and sings without it for a track about the people in his life who keep him going in the music business. While it shows again that T-Pain is a good singer without the vocoder, I feel like this track doesn’t belong on the album. It doesn’t really fit with the other tracks in beat or sound, and not just because he’s not using the vocoder. I’m almost leaning towards a skip here, but I’ll leave that up to you.

Superstar Lady
Featuring Young Ca$h
First official dud of the album. It’s 3 minutes long, about the same thing that you heard done better in the previous tracks, and it has a terrible rapper on it called Young Ca$h. Man, these rappers are getting really creative with their names nowadays, aren’t they? SKIP!!!

Change
Featuring Diddy, Akon, & Mary J. Blige
See the big names on this track? Forget it, this track is awful! Diddy doesn’t spit one bar, Akon is weak, and though MJB can do no wrong, she can’t save this track. Did I forget to mention it’s over 5 minutes long? SKIP! SKIP! SKIP!

Digital
Featuring Tay Dizm
I think it’s time to mention how much I hate Tay Dizm. This nigga was on Rap City in the freestyle booth and lasted like 6 bars before stopping. Then T-Pain, the host for the episode, goes on and spits like 30 off the top of his head, completely putting him to shame. How is an R&B singer gonna freestyle better than a rapper?? However, I didn’t even get to Dizm’s verse before I had to skip this song. It’s just terrible. SKIP! SKIP! SKIP!

Karaoke
Featuring DJ Khaled
I knew this song was coming with all the people with vocoders nowadays, I knew T-Pain was going to talk to all the people out there jacking his style. T-Pain actually spits some amazing bars on this track, but the real problem here is DJ Khaled: he sucks! There is no hook on this song, just Khaled yelling randomly “We the best!” and all the random shit he yells. So, after you hear T-Pain spit a memorable line like: “This ain’t no disrespect, go ahead and do ya shit/But my daughter told me to tell y’all ‘get off my daddy’s dick!” (DAMN!), Khaled jumps on with all his nonsense. This nigga even had the nerve to yell out “We Global!” at the end of the track for publicity. No matter how cool T-Pain is with Khaled, that’s just disrespect. If you can ignore Khaled, it’s a hot track, but for me, SKIP!*

(*Note: ALL of the deluxe tracks suck, and they’re all SKIPS to me.)

Bottom Line:
Let’s get the bad out of the way: like a Three Ring circus, Thr33 Ringz is really disorganized. The rapping, singing, and skits sometimes don’t mesh together. Furthermore, T-Pain’s guest stars sometimes don’t live up to the billing: Akon sucks, I actually think he should quit while he’s ahead, Khaled is Khaled (nuff said!), and the rest of the Nappy Boy crew (Tay Dizm, Jay Lyriq, and Young Ca$h) are well below what they should be at. That said, Thr33 Ringz is undoubtely T-Pain’s most complete and finest album to date. Only thing that would make it better is to trim the fat: cut down the tracks at the end that don’t work and make it at 14-15 track album. Still, in the end, T-Pain shows a lot of potential both with and without the vocoder, and finally shows he’s a lot more than a hit-maker, but actually a talented musician. With this album under his belt, he can claim the title of Ringleader, and even better, live up to it.