The Stoop: Where Are They Now? 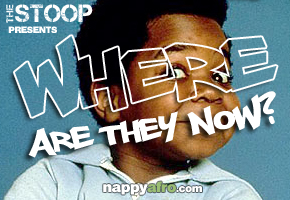 As the youngest member of the nappyafro crew, I find that it is my duty to show a different side of the new school Hip-Hop. I mean, Bow Wow USED to be a decent rapper, right? And Romeo isn’t that bad at all. I feel like the new school generation gets a bad rep only because they cater to their same generation: a group of teenagers who just want to jump on the floor and move. Only problem is they make their ENTIRE album like that and their actual talent is lost in the mix.

But I was surfing the web and I found a couple of Hip-Hop artists that I just haven’t seen in a while. Are they finished? Have they given it up? I don’t know; some I wish they would just quit, and others I kind of want to stay in the game. At any rate, here we go.

I first saw her on BET’s 106 & Park when her video was the new joint of the day. Her song, “Selfish”, is kind of blah, but I mean that’s one more female in the game, right? Plus she’s Asian! I love seeing diversity in the game, to be honest; Hip-Hop and R&B should be open to all people, not just African Americans, and to me that’s what the game needs. This single came out in March, and then POOF! She was gone, just like that. I guess the album was pushed to next year?

I know I dissed him in one of my other columns, but come on: we all gotta eat. I can’t front: he’s got no skills at all, but I thought he would make a bigger imprint on the rap game then just a one-off single that he featured on. Well…OK, I take that back, but at the same time I expected a single to be released around this time for him, or something. At least an appearance at an awards show.

I could spend all day on this one…WHERE ARE YOU MAN?!? After a bunch of mixtapes and even more delays, my patience for the “best album in the last 20 years” is growing thin. I mean, you had the time to do four episodes of Entourage; where the hell is this album? Jay, please release Blueprint 3 so you can sign this nigga and get his shit straight. Damn!

Not sure where he is either. Like King Jerm, I co-sign this dude. I don’t think he’s the absolute best on Grand Hustle like he does; T.I. recently got better with Paper Trail. Dro’s lyrics are really good; he showed a lot of skill on his debut and even went Gold, something even T.I. can’t claim to have done. But after two singles (both pretty hot), he was gone. I saw him Big Kuntry’s music video, but that was it. Shame, again, just like a lot of Grand Hustle artists. Is T.I. becoming the Jay-Z of Grand Hustle? Let’s hope not.

Haven’t seen much of this guy in awhile, and by a while I mean in three years, ever since his last album. He’s never been the best rapper, but he is just ONE hit away: I’d like to see him get that hit and become the success story that Common is today, but seeing as once Jay starts Roc Nation up, Bleek will be flying solo with his own label, I don’t know if that will happen.

Bottom Line:
Well, I wish the best of luck to all of these artists. I’m probably missing out on a whole bunch of people: shout out to Wale, Kid Cudi, and most of the “New School of 2008”. Let’s hope they get a hot single or something?