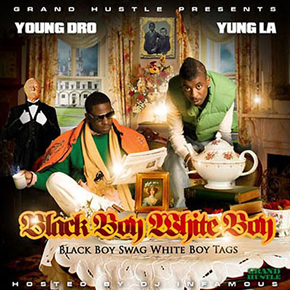 With T.I.’s Paper Trail pushing past 1.5 million albums sold after four months; you have to wonder what is next for Grand Hustle? After carrying the label for almost a decade single handedly; the Grand Hustle roster will be forced to keep the label afloat while Tip does a year for felony gun charges. What better way to kickoff 2009 than with a mixtape of mostly new material from the ONLY other Grand Hustle artist with any kind of star power Young Dro & the labels second newest signee, Yung LA.LA, born Leland Austin, had arguably one of the top 5 songs of the summer with “Ain’t I (Remix)” but how much the single’s “success” could be attributed to the inclusion of Tip & Dro ? Although he dropped a decent mixtape early last year, Offset Shawty (or Swag depending on which version you had) LA still remains a relatively unknown character. If you are unfamiliar with him I’ll just say he’s definitely an anomalous character. When he was first signed to GH I wasn’t sure where how/where he’d fit into the label and going into this mixtape I still wasn’t quite sure.It’s going on almost two and a half years since Dro’s debut album Best Thang Smoking and almost a year since his last mixtape, I Am Legend. Excluding a handful of features and public appearances with his ex-girlfriend (SHRUGS I don’t keep up with this ****) Fantasia, Dro has been pretty irrelevant for the past year.

So let’s get into the actual music. The mixtape has 30 tracks but this is deceptive. Nine of the “tracks” are (useless) skits and the intro. I could have definitely dealt without any of LA’s skits. The only thing more aggravating than his voice when he’s rapping is his voice when he’s talking. Dro’s skits vary. Some of them have him speaking in third person about himself and LA’s “swags”. These are slightly humorous. Then others are completely useless. Just him introducing the next song/”freestyle”. So that leaves 22 tracks minus seven songs that have been have already been floating around from random mixtapes and etc. leaving 15 new songs. Part of me is ecstatic to hear new Dro material. Another part of me is disappointed. Dro has a formula and he sticks to it throughout the ‘tape. Ex: “Apple ‘El Camino / the trap is the Casino / Dro is Robert DeNiro / Ginger’s in the fn’ limo” ; “Rappers keep starin’ / apple peach McLaren / I know karate good like I got Japanese parents.”  His topics jump from __________ colored cars/diamonds, costly exotic cuisines, _______ colored weed that is highly potent, sprinkled with a few Louie, Gucci and Lauren references. Oh yeah and he ride’s on fairly large rims. Usually ranging from 26 inches up to 35 inches on his Yukon. The knock on I Am Legend for me was the production. It wasn’t all lackluster but it just didn’t seem to fit him as well as the production from Day One and Best Thang Smoking. I wouldn’t call all the beats “top-notch” but they all work well enough and seem to match both artists. “Niggas say I’m fie with that rappin’ but I can sang though.” One thing you will notice about Dro ; he is throwing in a lot more melodies and singing on hooks. I personally like it. It’s like he’s “horsin’ around” but it actually isn’t THAT bad and one can only chuckle when hearing him singing about still selling drugs and YAY. LA. Hmmmmm … he isn’t the greatest rapper clearly but he’s decent. He’s definitely not as entertaining as Dro but in moderation I don’t mind listening to him. It’s just when I have to listen to him for more than a verse is when I start to cringe. I can’t really criticize him much for not having a subject matter because neither does Dro but Dro is humorous when he is redundant in subject matter. LA just isn’t as clever as Dro. Without the words/phrases “futuristic”, “swag”, “off-set”, “what else” I’m not sure what he’d say about himself. At times he also seems confused. One second he’s this weirdo/geek/nerd that’s swaggin’ and everyone is trying to jack his futuristic swag. Then his pockets are “extra sloppy” from selling straight drop and gettin’ to the money. Then again he’s a rapper. I’d just like to know how not wearing a belt or brushing your hair makes you “futuristic.”

Bottom Line:
This is definitely music for the Grand Hustle aficionado. It sounds just like music you would expect from Grand Hustle label. Drugs, guns, cars. Dro and LA have a certain synergy that I can’t quite place my finger on but it works. The review doesn’t seem that positive but this is a decent release. Definitely not on the level of I Still Got That Dro or Day One but I’d find it hard to make a choice between this and I Am Legend. Pretty solid. Def Whip Music.

You can get the full mixtape in the FORUMS.