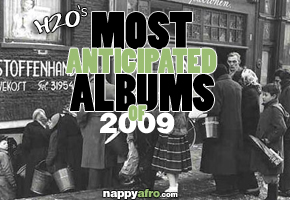 Well, the awards are over, and it looks like 2009 should be great musically: you got Hov, Slim Shady, the return of Dre, 50, the Notorious soundtrack, Ludacris’ Theatre of the Mind 2, Kanye West, Drake, Common, Lupe Fiasco…I could go on and on. But I’m sure y’all already knew about the hits coming out this year: it’s time for me to count down my top five anticipated albums of the year. Oh, and as a disclaimer, my top five albums is different from the other staff’s.

5. Dr. Dre – Detox
I had to put Dre up here. Detox should be pretty much perfect by now, and I just can’t wait! But I know that it’s not a definite that Detox is coming out. That’s why Dre gets the #5 spot. While I’m almost 100% certain that this entire album will be a banger, I can’t be sure it’s coming out this year. I will say that if it doesn’t come out this year, I’m giving it up. I know some of you out there already have, but come on, give Dre one more year!

4. Drake – Thank Me Later
Drake, after grinding hard in the mixtape game and churning out 100’s of songs like another famous rapper, is now set to release his first studio album this year. Even though he still hasn’t made that first step to releasing a commercial album, Drake is already sounding like a veteran on some of the tracks that he’s put out. Anyone who’s heard Comeback Season knows what I’m talking about. That’s why Drake gets the #4 spot.

3. Jay-Z – The Blueprint 3
Being a huge Jay-Z fan, you’d think that he’d be higher on this list, but I can’t lie, I’m excited about BP3. “Jockin Jay-Z” to me was just okay, but it was “History” that made me a believer that Jay was really gonna go hard this time. That, along with all the extra songs he’s been doing (“Go Hard (remix)”, “Brookyn Anthem”, “Brooklyn We Go Hard”, etc.), I feel like BP3 will be the album that Hov gets rid of the #45 jersey and puts the #23 back on.

2. Eminem – Relapse
Em has been out of the game for 5 years now. He’s hungrier than ever and ready to take the game. “Crack a Bottle” is too hot, that freestyle he did was hot, and it just keeps me wanting more and more. That right there is what makes a great album buzz and keeps the public wanting more before you hit them with the hot fire. So far, Eminem hasn’t released a dud track off this, so I’m gonna have to put him at #2.

And the winner is…
1. Lupe Fiasco – LupE.N.D.
Surprised? Yeah, you should be. I don’t know why, but Lupe’s next project facinates me: three CDs in one album is definitely ambitious to say the very least. I don’t even think that’s been done in Hip-Hop (Eightball’s Lost doesn’t count)! Yeah, a lot of people have complained, wanting Lupe to stay in the game. Why release three CDs at once when you could stay in the game for three more years?? But I think that all the questions will be answered at the end of this year when LupE.N.D. is released. That’s why Lupe gets my #1 spot, and I’ll gladly review all three of those albums.