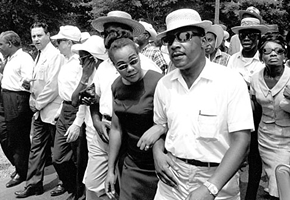 You know we had to show respect to Martin Luther King Jr. (I had to throw up a pic of MLK that’s wasn’t so predictable). It seems fitting since tomorrow Barack Obama will officially become the United States Of America’s first African American president. Too bad MLK didn’t live to see it (Damn I wish that Boondocks episode was real).

On a side note, last night me and King Jerm was talking about if we should put anything up. Then I said, “What about ‘King Holiday’ with Kurtis Blow, Whitney Houston, & The Fat Boys?” He was like, “What?” Well here is the video I was talking about. It features: Whitney Houston, El DeBarge, Fat Boys, Full Force, Grandmaster Melle Mel, Kurtis Blow, Stacy Lattisaw, Lisa Lisa, Teena Marie, Menudo, Stephanie Mills, New Edition, Run-D.M.C., James “J.T.” Taylor, & Whodini. Happy Martin Luther King Day!