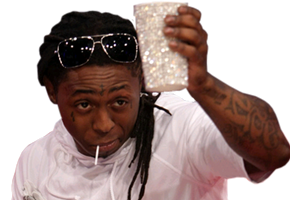 I know that a lot of you guys hate everything about Weezy, but I’m starting to understand why. How high was Weezy when he decided to make a rock album? Why didn’t anyone intervene and say that this might not be a good idea? Looking at the recent success of a rushed album by Kanye got Weezy to put on his “thinking cap”. We all know that he has been pictured with a guitar, strumming the same notes for the last two years, but  a whole album though? Come on Weezy, make Tha Carter IV and keep trying to be the best rapper alive. I really dislike rap/rock collabos, so excuse me if this comes off a bit harsh. I can’t cosign Weezy on the rock tip at all. To me it sounds ALOT like the Jonas Brothers. I know Weezy didn’t play any of the instruments, because it was done really well. This sounds like one of those songs that you would hear on The Disney Channel or Nickelodeon. Wayne, please go back to being the “rapper eater” and stop wanting to be this all around Hip Hop backpacker/Hipster/Rock Star/skateboarder. Don’t take my word for it….YOU BE THE JUDGE.