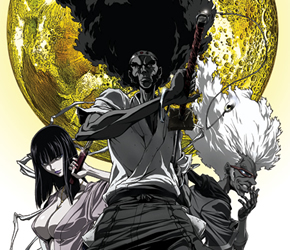 Yeah, yeah, I know we ain’t a moview review website, but with the soundtrack to Afro Samurai: Resurrection out, I figure this is the perfect time to tell you what I thought of the movie. To be honest, it was awesome, but I feel like something was missing…I wanted to see more fights between Sio/Afro, and Kuma/Afro, but the ending to the film was incredible; I wasn’t expecting it at all.

The movie is about Sio, with Kuma’s help, trying to revive Afro’s father. While it was thought it was to raise an undead army, it’s actually just to make Afro suffer: to die by the hand that raised him. This plot line is even better than what I thought it would be! Afro travels the land to put his father to rest once and for all. Ninja Ninja, after his “death” from the TV show, returns, proving he’s just a figment of Afro’s mind. However, his jokes are always hilarious, especially when he talks Afro up one moment and then tells him he’s getting his ass kicked the next. Samuel L. Jackson constantly switches from hardened warrior back to laughable sidekick almost too well.

The action sequence are just plain crazy. There’s one fight that takes place right in the middle of a parade with on-lookers watching and thinking it’s just a part of the show until Sio’s agents show up. One of the first battles occur on a shore with Afro just having caught some fish. He then battles scores of enemies, showing no mercy. The ocean even turns bloody red from the blood of the dead samurai. It’s just crazy!

However, there are some bad points that I’d be wrong not to point out. For example, it’s too short! It’s the length of three episodes, maybe four if you added in commercials. When I pictured Afro Samurai Season II, I just wanted a lot more. Further, there are a couple deaths in the movie I wasn’t happy about. One I expected, but the other I feel was unneeded and could have been avoided, plus could have been used to continue the series. Especially since at the end of the movie, someone else from the series returns, it’s a little weird to me.

One more thing I was disappointed with was the “one thousand deaths” claim. There are probably like 150 at the most. Not that I’m saying that isn’t a lot, but when I get told that I’m gonna get to see Afro slash through over 6 times that amount, it’s just frustrating. One last complaint would be the finality of the ending, but mainly because I’m a fan of the series. The thought that they would throw away all they put together has me worried, but after the quick glimpse of the future we are given at the end, I’m sure that’s not the case.

Bottom Line:
Overall, while it has flaws, this movie was just plain epic. I mean, if their goal was end to the series for good and finish on a high note, then mission accomplished. If they wanted to continue the series, it may be a little bit tougher now, but I’m sure they will be able to pull it off. I liked this movie a lot more than the TV series also, and even though it’s short, it leaves you satisfied. The DVD comes out February 3rd if you missed the movie

nappyScenes: The Shore scene, The Parade scene, Afro vs. his Dad, Afro vs. the Androids, and all of the scenes with Ninja Ninja.