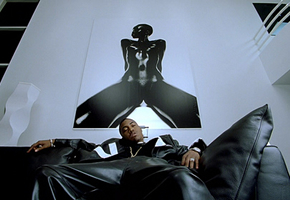 I got some e-mails about how some of my recent movie picks featured on Friday Night ‘Fro didn’t really relate to Hip-Hop. Well to answer that; I thought that was the point. (Y’all slept on The Wrestler!). But if the people want a more Hip-Hop movie this week, I’ll give them Belly. Even though Belly was mildly received by critics when it was released in 1998, it’s still a straight hood classic. You had music video director Hype Williams taking the helm for his first feature film (His only one still to this day), DMX & Nas acting alongside with Taral Hicks (That was a body double in her sex scene), rappers Method Man and Vita (“Yea, I sucked his dick!”), dancehall artist Louie Rankin, and R&B singer T-Boz from TLC. If anything stands out in this film it’s the highly stylized “noir-like” visual design and cinematography Hype used. Don’t get me wrong, there were flaws (Suspect acting + weak plot) but how many quotes do you remember from Belly? I personally don’t remember how many times me and my friends quote lines from Belly; “Man, you think I give a fuck about a montherfucking red light? Faggot cops can’t touch me. I’m out here smoking weed, speeding, all that, dawg. Fuck that. That’s me. Untouchable.” Also, this movie really spotlight DMX when he was on top of the world. That seems like a long time ago seeing that this year we Earl Simmons the DMF awards…but we did rank Tommy “Buns” Bundy one of the Most Influential Movie Bad Guys. So yeah, here’s Belly.