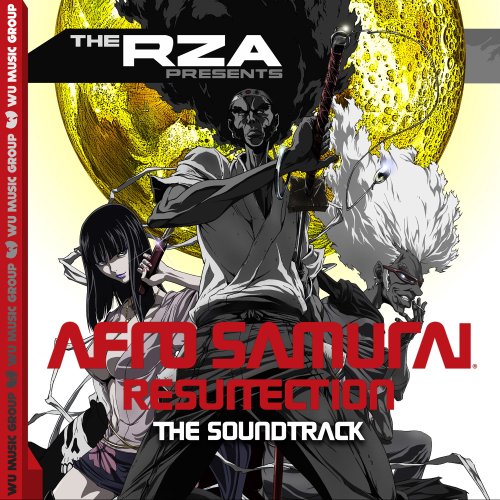 Damn, you know January/February is slow for Hip-Hop when we reviewing anime soundtracks. But hell, it is a Hip-Hop album. There are no scores from the movie either: just short, 45 second skits included in the tracks, so it’s a straight up, no nonsense Hip-Hop album. After The RZA’s last Afro Samurai soundtrack released two years ago, I was disappointed: there were maybe 5 or 6 hot tracks out of a 25 song album. But after hearing some of the tracks off of the new soundtrack, I was hooked. Plus I saw I got some of you guys on the site interested (916-ness has that new avatar, MaCK and Ebb said it was dope, etc.). Let’s see what The RZA put together this time.

Combat
RZA & P. Dot
After a quick introduction from Samuel L. Jackson playing Afro Samurai, the beat drops, and it’s hot. P. Dot’s hook is “So many times I had to sneak up on a nigga with my finger on the trigger like, like I’m pulling out my sword, this is combat man this is war.” That’s too hot!! The RZA also goes in pretty well also, nothing really notable, but at the same nothing bad. This is the song that starts everything off, and it does the job perfectly. They been playing this all on the trailers for a reason: this is the song that got me interested in the soundtrack.

You Already Know
Kool G Rap, Inspectah Deck, & Suga Bang
The RZA pulls out a Caribbean style beat on this one, and man, is it infectious. The hook is kind of weird, but after you hear this song, you’ll be singing it too. Suga Bang’s Caribbean style hook is too good on this. Inspectah Deck and Kool G Rap both turn in respectable verse for a solid song. I’m really feeling this song, can’t believe they didn’t use this in the movie!

Blood Thicker Than Mud “Family Affair”
Reverend William Burk, Sly Stone, & Stone Mecca
This song is kind of a slower rap song, but still hot: “It’s a family affair…” and William Burk turns in some hot verses on this one. Hell, you even got backing vocals and singing from Sly Stone from the famous soul band and Stone Mecca from the last soundtrack. Nice! This wasn’t used in the movie, but I guess that’s alright because I don’t see how it would fit. I’m liking this track, it’s not as good as the last two, but still good.

Whar
RZA, Kool G. Rap, Ghostface Killah, & Tash Mahogany
This song is fire! It’s just 4 minutes of lyrical onslaught on this one. Crazy! Ghostface definitely goes the hardest on this track out of all of them, even though all of them turn in great performances. This definitely a great, standout song on the album, I can’t believe this wasn’t in the movie either! This woulda made it much better.

Girl Samurai Lullaby
Rah Digga & Stone Mecca
This song focuses on the girl samurai of the movie, Sio, voiced by Lucy Liu. Stone Mecca’s crooning on the track sounds perfect for this track. Rah Digga is also coming hard on this; she’s really aggressive for a girl. This was used in the movie and it fit perfectly with the theme, showing Sio as a young girl meeting the teenage Afro Samurai for the first time. A good addition to the soundtrack.

Fight For You
Thea Van Seijin
I forgot to say that the album switches up to R&B a lot of the time. Here you got one of the sickest soul singers out there on a song just pouring her soul on the track. This was also in the movie. Even though it involved the villains from the movie, Sio and Jinnosuke/Kuma, the track displays so much emotion, it really makes you feel what they are going through and why they are doing it. Another great track, not really so much standalone, but it works well in the movie.

Bitch Gonna Get Ya
Rah Digga
Damn! This track is 3 minutes of just straight lyrical assault from Rah Digga. She might be the next Queen of Hip-Hop, no doubt; she just gonna get back onto the scene. Digga continually uses clever couplets to flow from clever punch-line to clever punch-line. This track wasn’t in the movie either, but it definitely shoulda been; Sio is one lethal samurai, and this woulda been perfect for her. But it works as a standalone track, so it’s all good.

Bloody Days Bloody Nights
Thea Van Seijin & Prodigal Sunn
This song shoulda been a LOT longer. It’s really hot, but it’s less than 2 minutes long! Thea delivers an amazing hook over this dark and brooding track. Prodigal Sunn’s rapping is aiight, nothing major, but he doesn’t hurt the song either, so it’s aiight. I think this was in the movie, but I don’t really remember. Either way, this is hot.

Kill Kill Kill
Monk
The hook is kind of a whisper like track: “Kill Kill Kill: Afro Samurai…Die Die Die: Afro Samurai…” Awesome! The track in the back is kind of triumphant, which contrasts with the lyrics, but it’s nice. I liked the way they used it in the movie too: the family members of some of the men Afro killed in the beginning of the movie decided to try to battle him…you can guess the results. This fit with the movie well, I’m feeling it.

Nappy Afro
Boy Jones
Oh snap!! A shoutout to our site? Eh…not quite. I guess every album has to have a dud, and this is it. Boy Jones is going crazy on this one. I can’t believe this one was in the movie but the other ones weren’t! Here’s the hook: “I’m still gettin’ busy with my Nappy Afro/ My, my, my Nappy Afro…” Nah, just ain’t feeling it. I will say this; in the movie it was actually good. The DJ pulls out a Record with the name “Destroy All Afro Samurais” and this is what plays out of the loud speakers while 100s of soldiers attack Afro. Still, this ain’t doing it for me: first dud.

Bloody Samurai
Thea Van Seijin, Black Knights, & Dexter Wiggles
Damn! The RZA knows how to recover from a dud. This song is the shit! Thea killed this hook as usual, putting even more emotion on this track. The Black Knights and Dexter Wiggles jump on this instrumental and absolutely bury it! Did I forget to mention the beat on this is cold as hell? This just might be one of the best songs on the album. Not sure if they put it in the movie, but who cares? Check this out! And by the way, why isn’t Thea on more hooks? Girl can SANG!!

Dead Birds
Shavo Odadijan, Killa Priest, & Prodigal Sunn
This song is pretty hot, but its pretty short. Still, everybody on this track kills it: Shavo’s singing on the hook, not bad, not better than Thea, but still good. Both Killa Priest and Prodigal Sunn are both killing it on the track, I’m liking this a lot. I would bang it more, but it’s really short, so I don’t. This wasn’t in the movie, but whatever, no loss.

Arch Nemesis
Ace & Moe Rock
The song leads off with a quote from Sio: “Do you remember me? I remember you…” Then the two of these dudes go in and turn in solid performances; sometimes I think if The RZA wasn’t so good with beats, I wouldn’t be interested in any of these songs. This wasn’t in the movie, again, no loss. It’s just ok.

Brother’s Keeper
RZA, Infinite, & Reverend William Burk
The RZA comes back to rap on this track, and he and William Burke do a good job with Infinite showing he’s got a good set of pipes. The beat that The RZA turns in here is again consistantly excellent, and I can’t believe this wasn’t in the movie, seeing how Sio is pretty much Jinno/Kuma’s keeper. But I’m not sure how this would fit.

Yellow Jackets
Ace & Moe Rock
The duo makes a quick return for this one. This is a REAL dud. The RZA’s beat takes a bee’s buzzing and tries to make it sound ill, but because it happens at the end of everyline, it just gets annoying and takes away from the lyrics. But the duo isn’t really saying much, so this is a SKIP!

Take The Sword Part III
60 Second Assassin, Leggezin, Crisis, Christbearer, Monk, Tre Irie, Beretta 9, Bobby Digital, & Reverend William Burk
Damn! Look at all the features on this one! Not to mention this track is TEN MINUTES LONG…I’m not gonna lie: it’s ten minutes of straight fire, but its just too much to listen too. How many times are you going to listen to a 10 minute song? Damn…this is another dud because it’s too long. The other “Take the Sword” songs from the last OST were fire and like 3-4 minutes long, and those were like the best tracks off the album. I just can’t listen to this, even though I do like posse-cuts…don’t even ask if they put this on the movie. SKIP!!

Number One Samurai (Afro Season II Outro)
RZA & 9th Prince
This is the song they used to close out the movie; this one was also on the trailers for the DVD releases. The RZA hops on this one with 9th Prince. This song is hot; the beat here is again CRAZY! Even though the hook is simple on this one, it’s tolerable because of the beat. Check this one out, it’s great.

Bottom Line:
The RZA learned from his mistakes last time: don’t put too many R&B tracks on the album, cut the scores off, and put on some real, raw Hip-Hop. I think he accomplished all of those goals on this project. The songs on the album fit for the most part with the movie. You can listen to each one and think of a particular scene from the movie. Overall as soundtracks go, this is hot. You definitely wouldn’t expect this from an anime television show. If you want something hot to bang in your ride or even something slow you can chill to, this has a bit of everything.