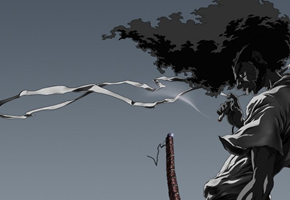 Well, I figured if B-Easy could post Kill Bill and all those other weird ass movies, I could put up this. What is it, you ask? I’m not gonna lie: it is an anime from Japan, which means it is (takes deep breath) a cartoon. HOWEVER, I don’t think you will ever see such a badass cartoon in your life. It’s Afro Samurai. It’s rated TV-MA for A LOT of violence (every attack is cutting off someone’s head), language, and some sexual scenes. First off, before you say this has no connect to Hip-Hop at all, check out the names connected to the project: Samuel L. Jackson as Afro Samurai and his best friend/annoyance, Ninja Ninja. And get this…RZA from Wu Tang Clan on the soundtrack. If THAT doesn’t have you interested, here’s the storyline:

In this land, there are only two rules: the #1 warrior is given the powers of a god, and only the #2 can challenge the #1. Afro Samurai’s father was the original #1 before he was killed in a fight with the #2 at the time, Justice. Now, many years later, Afro is the #2 with only one thought on his mind: revenge. With Ninja Ninja, his companion, he travels to Mount Shumi while battling the rogues and bandits after his #2 headband.

Think about it: you’re after ONE man who killed your father right in front of your face, but because of the way the rules work, ANYONE can challenge you. This is the life Afro lives; trust no one, and fight to survive. The show is really short. They only made it five episodes long, so you can easily watch them in an afternoon. This show is amazing, check it out and let me know what you think. Oh, and if you like what you see, they are making a movie based on the show called Afro Samurai: Resurrection, with Samuel L. Jackson and RZA both returning (Coming out Jan. 25th at 10pm EST on Spike). I put a trailer of the movie below so you can see for yourself. Also, they are coming out with a video game for the 360 and the PS3 on Jan 27th, so check those out (And then there’s the soundtrack for Afro Samurai: Resurrection, but that’s another post…). Peace!