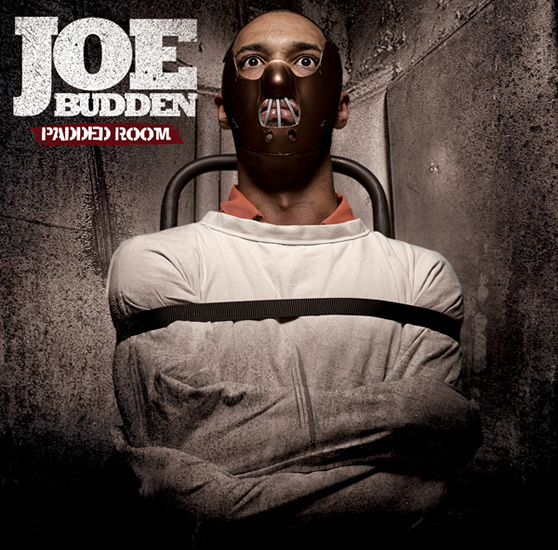 I’ll be honest; at one point I had wrote Joe Budden off as another casualty of the Hip-Hop business. He was a talented rapper that was forced in the whirlwind of “hit” singles and commercial markability. Budden’s first album was overlooked (Some say it was too “emotional”) and his second album was shelved by Def Jam. Even with his Mood Muzik mixtape series, his whole music future looked to be up in jeopardy. I guess I was wrong. The Joe Budden of today no longer is the guy who tries to duck the cameras; he IS the camera (joebuddentv.com). He’s aligned himself with a record company that he feels supports him (Amalgam Digital). And he even had formed a crew of his own in Slaughterhouse (With Royce Da 5’9”, Joell Ortiz, & Crooked I). His official sophomore album, Padded Room, was originally schedule for an October 2008 released but was pushed back to February 24, 2009. Halfway House was released instead to hold the fans over until then (I really didn’t feel it that much but that’s another story…). Now that Padded Room has been finally hit the street, what’s the verdict?

1. Now I Lay
Produced by Blastah Beatz
“I like to welcome everybody to The Padded Room”. Joe Budden starts off rhyming with a line from his most well known song “Pump It Up” (Saying that’s where it all started). He also uses a classic prayer for the hook (“Now I lay me down to sleep, I pray the lord my soul…”). The beat is a great background for Budden to explain how he got here and makes a good introduction to the album. I’m trying to place the sample used (Memphis Beek also used it for “We Are”; hit me up if you know).

2. The Future
Featuring The Game & Dominic; Produced by Fyu-chur
I’m glad that Joe Budden and The Game squashed their beef, but I expected a better song to come out of it. I understand the need for the lead single to be for the ladies but the hook is predictable; “Yes I am a bad guy, I can see you like it, You can be the headline if I can be your sidekick.” The beat was okay but I guess I was expecting some lyrical gutter type shit. I’ll pass on this one.

3. If I Gotta Go
Produced by The Klasix
This song has Budden questioning life and death, which is definitely in his zone; “My jargon is I’m a arsonist since 11 when I found out what arson is.” The production here is well down (The sample on the breakdown is hot). The hook may take some getting use to but it fits.

4. Don’t Make Me
Produced by Blastah Beatz
Budden goes deeper about his life struggles and staying on the correct path (“But the boy won’t bend, though the road to the riches is starting to look like it don’t end.”). At first I thought the beat didn’t make sense here but after further listen it works; the chorus is good too.

5. Blood On The Wall
Produced by MoSS
Budden uses 2Pac’s chorus from “Life Goes On” here and then proceeds to rip Prodigy a new asshole (Well on the 2nd verse at least). “Wanna blog? Here’s a reason: How the fuck Murda Music? Anybody ever diss this nigga is still breathing? Jay-Z, Saigon, Nas already pealed him. 2Pac, he ain’t alive but you ain’t killed him.” The beat on this one is made for shit like this too. I wonder if Prodigy thinks Joe is still the worst rapper now?

6. In My Sleep
Produced by The Klasix
This is the 2nd single off the album. The whole song is about dreams and nightmares and contains a lot of double meanings. I think this should have been the first single off the album because it’s more representative of Joe Budden. The structure of the song is basically Budden rapping for the whole 4 minutes. The production gives room for Joey to explore lyrically.

7. Exxxes
Produced by The Klasix
Speaking of double meaning…this song is almost the epitome of it. This is Joe Budden at his best because it shows his talent and intelligence. Now, I’ve talk to a few people and some think this song is about drugs but I personally think he’s personifying depression as a girl (“Her parent are dope heads, she dropped out of school too. Got the same tats as me, I found that unusual”). The acoustic and finger snap heavy beat lends to an already great and introspective song.

8. I Couldn’t Help It
Produced by The Klasix
Through this whole song it feels like a beat should have drop or something. The songs deals with the relationship between Budden and his child’s mother as well as him sleeping with a well known rappers’ wife which I’m sure have the bloggers taking; “I’m filled with guilt because all I can think bout was, he have her on TV with they kids, I got her on the TV in her ribs.”

9. Adrenaline
Featuring Drew Hudson; Produced Dub B
Joey gets his “Rock & Roll” on with this track with the electric guitar and crazy drums. The track is well produced and let’s Budden spit some fire. I probably could have done without the hook though.

10. Happy Holidays
Featuring Emanny; Produced by Quan
The hook here is too damn sugary. It sounds like something that should be played in the credits of a Tyler Perry movie. It’s a shame because besides that the beat and concept are good; holidays don’t matter be it because of past let downs or focus.

11. Do Tell
Produced Blastah Beatz
Here Budden tells the world what he wants to be said about him after he’s passed in one long verse. The idea of this track may not be original but that’s not saying it’s a bad song.

12. Angel In My Life
Produced by Blastah Beatz
The intro to the song has Budden’s friends talking about how he was put in a straight jacket and thrown in a insane asylum. The production and sample provided a somber backdrop. The whole track is very in-debt with the whole theme being Budden explaining how he got there; “Truth told I figure a few hoes mixed with some new clothes should cover my loop holes”.

13. Pray For Me
Produced by Versatile & Dilemma
This reminds of something DMX did a few times. The finale to Padded Room has Joe Budden conversing with God; “I think it’s a mockery when rich niggas when the lottery. Gave us Bush twice, God I hate to be rude but you let skinny niggas starve, give obese niggas food.”. I probably would have gone with a different person doing God’s parts but it’s hard not to relate to the message. This ending makes sense because it fits with the entire theme of the album.

Bottom Line:
In some ways, Padded Room seems like Joe Budden’s true debut album. It’s mostly filled with deep thoughts, questions about life, and personally reflections that seem to frequent Joe’s music and make it more personal than a majority of rap music made today. Not to say that this album has no drawbacks. With all the Slaughterhouse buzz right now, it’s a wonder why there wasn’t a track included by them here (or a least a feature from one of the members). It also would have been nice to hear some more light hearted stuff from Budden to show more of the different sides (This IS the same guy that raced Joell Ortiz in a parking lot right). Besides all the nit picking, this album was enjoyable listen and will definitely keep the Joe Budden “internet solders” happy…especially since he’s already announced that he’s already working on another album to be released by the end of the year. Jump Off! (Update: After listening to this album further, I realized that I wasn’t keeping most of the songs on my iPod. Still not a bad album; just not 4 Stars)

nappyPicks: Everything except “The Future” & the chorus on “Happy Holidays”