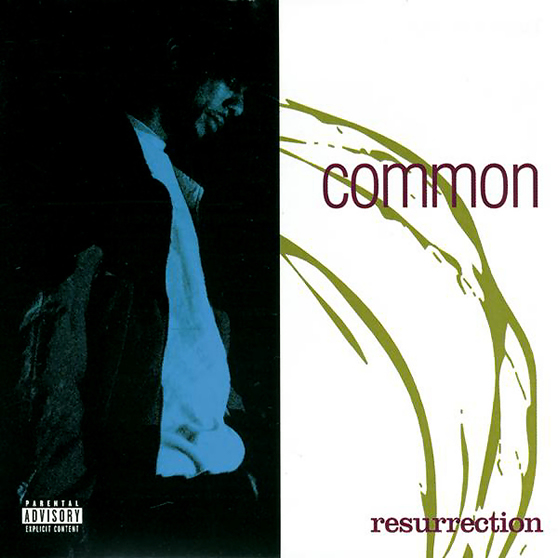 Okay do me a favor and just forget about Common’s latest album Universal Mind Control for a moment. Just act like that album was never released and tell me what you have…one of the best conscious rappers of all-time.From his more recent releases Finding Forever and Be to his earlier ones Like Water For Chocolate and One Day It’ll All Make Sense, Common is one of the best rappers on the mic that constantly delivers a message within in raps.

Now even though all of the albums previously mentioned can be considered his best, there’s only one album in his catalog that stands above the rest and that would be his 1994 release entitled Resurrection. This album came after his debut album Can I Borrow A Dollar? but truthfully stands as Common’s (then Common Sense) introduction to the industry and remains to be one of his strongest albums in terms of flow and unity. From the first track “Resurrection” you immediately get a taste of the Chicago emcees force and lyrical wizardry behind the microphone with lines like “I analyze where I rest my eyes and chastise the best of guys with punchlines, I’m Nestle when it’s crunch time/For your mind like one time, if poetry was pussy I’d be sunshine cause I deliver like the Sun-Times”. Not only are we blessed with ill lyrics but music producer No I.D. hooks up Common with one of the smoothest Hip Hop beats ever heard. But it doesn’t stop there, as the next track just happens to be the Hip Hop classic song “I Used To Love H.E.R.” and who could deny the impact that this track had when they first heard it. Not only was this song powerful back in 1994, but it still holds true in 2009 in describing the ways of her meaning Hip-Hop.

No I.D. produces nearly all of the 15 tracks on this album except for two and makes songs stick together like glue as they are all infused with the sounds of Jazz that give this album a very smooth and laid back feel. If you weren’t A Tribe Called Quest, De La Soul or another native tongues group then it wouldn’t be normal to hear such jazzy production on an album. But this album displayed just much of that and stood the test of time being released amongst other classic Hip-Hop albums like Illmatic and Ready To Die. Filled with strong tracks like “Nuthin’ To Do”, “In My Own World (Check The Method)”, “Sum Shit I Wrote”, and “Orange Pineapple Juice”, there is no urge to reach for skipping a track as Common’s creative and complex rhymes combined with No I.D.’s Jazz fueled beat provide the perfect background music for riding in the car or just chillin’ at home. I know that many people say that Common was at his best lyrically on Like Water For Chocolate on tracks like “The 6th Sense” and “Payback Is A Grandmother”, but I don’t think you can find him more hungry or vicious than his mic presence is on Resurrection.

Being a fellow Chicago native this is the album that made Common of my top 5 rappers of all-time and the fact that he was reppin’ Chi-Town made it that much better. Just to hear him making reference to Chicago locations and things like Stony Island, Jew Town, Jeffery Manor, Whitney Young, Kenwood, and Hyde Park (Chi-City people know what I’m talking about) would make me smile on the inside and being able to relate to an artist that close was dope. Maybe it just me from have such a close relationship to another Chicago emcee in being a Chicago native but this was and still stands as the best Common album in my opinion. Bring it back to 2009 and let Universal Mind Control back into your mind. Don’t judge Common based on that album until you have heard and have a copy of Resurrection in your album to understand and realize just how great of an emcee Common is to this day. Back in 1994 Common took a different approach with his music and made an innovative and creative album that showed you didn’t have to rely on the topics of guns, violence, drugs, women, sex, etc. to make a great album, and it was that which made this album so memorable. You think that Chicago soul that Kanye samples so many times started with him in 2004…think again and look back 10 years earlier to discover with came from Common and Resurrection.