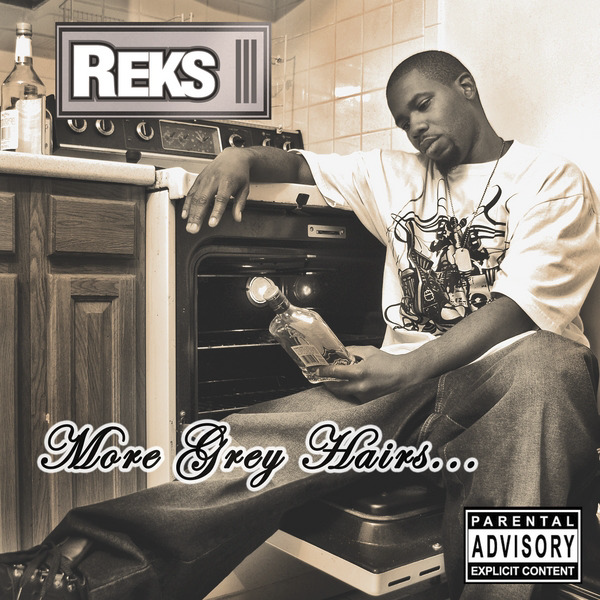 Ok, I’ll confess. I didn’t really listen to Reks. I’ve actually gotten into him more lately, due to just being him, getting that Statik Selektah album, and listening to the Grey Hairs album got me into his vibe. From what I see as Reks, he’s just a true underground artist. His wordplay is quite intricate, although easy to swallow. Anyways, he’s releasing his sequel to Grey Hairs, More Grey Hairs, which I can assume to be more of the same that he’s given us before. With open ears, More Grey Hairs (Note: Shout out to Chew who originally posted this in the forums – B-Easy)

Bitter
Produced by Soul Searchers
Luckily, they tell us the producers of this album, because I gotta look out for these guys. Reks starts off in a way Grey HAirs should start off, a grumpy man, who’s just trying to express himself in the rap game. The Soul Searchers really give a jazzy/soulful (no pun) production to Reks, as he explains issues that make him bitter, ranging from Africa, to even his family. The production is simple, yet it’s majestic how Reks flows in this song. Great start.

Play My Music
Produced by Statik Selektah
I’ve always liked Statik Selektah the moment I’ve heard of him. He’s just an underground producer (for now) who’s just trying to get into fame. Anyways, a simple piano chord, and some drum beats kick off this simple production. Rek’s starts to talk about how his music and the mainstream (Example; Wayne’s music) is so much different, and how he and other underground stars (Termanology, Sheek Louch, Prodigy, Joell Ortiz, Skyzoo, etc.) deserve to be accepted into the mainstream, and people should, of course, play their music. Nice track, although a bit simple.

Cloud 9
Produced by DJ Premier
How can anyone go wrong with a legend’s track? Rek’s again spits great fire here, on a really mystifying production that seems so simple, but it really does personify this track, and even relates to the track itself. Reks spits lyrics that just talk about how he’s in “Cloud 9”, I assume it to be whimsical, out of this world. Reks + DJ Premier is a great combination, and this production is one of my favorites so far. Great track. You have to really listen to it to even stomach it.

Stereotypes
Produced by 1914 & Statik Selektah
As the title of the track goes, Reks talks about stereotypes, although I only really heard specific ones about blacks and whites (where’s the Asians?) Well, the production relies on simple drums, and some vocals. The production is a bit lack-luster compared to the others ones, but still doesn’t disappoint. I find this song, although Reks is trying to make a point as usual, a bit boring and bland. Again, that’s just my opinion, but this song is probably the worst of all so far.

Killaz On Wax
Produced by Statik Selektah
Interesting title (Along with the funky, bass production from Statik Selektah). Where’s his producer drop? I like that woman saying, “Statik Selektah”, similar to the J.U.S.T.I.C.E League’s intro. Interesting premise here, as Reks raps about gangsters, and how they’re not real compared to his people. Maybe clichéd, but I found his word play in the song to be really interesting, and intricate. Much better than “Stereotypes”. The hook is also a nice addition to the song.

System
Produced by DJ GI Joe.
Funny producer name, and as Reks says, this production is the real Hip-Hop stuff, as GI Joe gives a good drum beat, with some trumpets to back it up. Reks starts to rap about his “system” which I assume is his lifestyle, and how he lives, what he represents to the people. It’s a bit unclear to me, but I assume he talks about himself, describing his area where he lives, and his lifestyle in general. Nice song, and I love the production in this song.

Year Of The Showoff
Produced by Statik Selektah
This song is straight fire. As Reks says in the beginning, Statik Selektah wanted to make a banger, and this suffices. Reks goes on his braggadocious mode, and raps about how he’s the “Year of the Showoff”. Already used as an idea, and a bit cliché, still, Reks does his job. But the thing I found even better was Selektah’s production. At first, it reminded me of a Wild West vibe, the cowboy rises up in the distance, badass and all. The production is really nice, and sums up the song in general. A banger that you don’t have to feel conceited about.

Money In The Ave (remix)
Featuring Termanology & Skyzoo; Produced by Soul Theory
The first song with a feature in it, a trio of rappers I’ve seen before (They teamed up on “Bars 4 The Stars” off Termanology’s If Heaven Was a Mile Away/J Dilla Tribute) It’s a nice song, the production being soulful (Yeah, I know) while the rappers rap about money in their avenues, and money really in general. The rhymes aren’t fresh, but their good enough for the song. A bit of a filler I have to say though. I like it better than “Stereotypes”.

Dear Winter
Produced by Timeless
That’s one badass producer name. We’re now back to the real album with “Dear Winter”. It’s a nice track in general. Winter, as it symbolizes to Reks is life’s sufferings, problems, and his declaration to it. It’s an unoriginal interpretation of winter, calling it cold to him. But the soulful production by Timeless, is sincere, and charming in general. Reks just simultaneously stacks up bars on bars in this song. Great song, for both lyrics and production

Goodnight & Goodluck
Produced by Demo
As Reks makes a song for the ladies, he simplifies down on his lyrics a little bit, but the production is quite soulful again. The production and how Reks puts up his lyrics aren’t mean as brash and ignorant, I felt that Reks was really sincere on how he really put up these words. Although the woman should’ve sang better, Reks sincere lyrics tell a story about how a man has to leave a woman, and their relationship isn’t working, and how they have to leave on good ways, as the song is called. Nice song.

Why Do We Say Goodbye
Produced by Statik Selektah
I think Statik Selektah pulls in a sample here, but I can’t name it. Reks really has a thing for these kinds of songs, doesn’t he? Again, the production doesn’t disappoint, one of my favorites in the album, in a slow drum beat, a high pitched sample, an other instruments. Reks raps about how he’s on the top of the life, how his life is really good right now, but all good things have to come to an end, even though he doesn’t want to. Reks doesn’t disappoint again, nor does Statik.

I Ain’t Shit
Produced by J. Creed
This song does take a huge downfall from his previous songs. Of course, “I Ain’t Shit” is really just trying to make Reks a real person. The production although soulful is a bit boring, simple, and doesn’t’ really appeal to me. This song although is a nice thing to show Reks as real (Even though he is already) it’s not as good as the other songs on the album. Filler, probably. And that hook is a bit nasty.

Light Of Mine
Prod. DJ Sprino
Any production that starts out with trumpets, and then goes into drums is a top notch one for me. A rebound (not a big, but one) from the last song is nice as Reks soon raps about the light in life, as he is the one, and how he found the light that showed him reality. The production brings back his mediocre song before. I don’t like Reks hooks all the time, unfortunately, and fortunately, Reks makes his hooks short, has other people singing them, or doesn’t have them’ at all. At least he doesn’t sing.

Til’ Ya Hair Turns Grey
Produced by DJ Sprino
The track does start slow; the track does turn into a faster paced one. I find Sprinos production a bit weird on this one, It didn’t really fit because it doesn’t suit the track in general. That doesn’t mean the production is bad, it just means that it’s not as good as we can really expect it to be. Again, Reks doesn’t disappoints in his songs, as of course, he talks about working, stressing, your life, until your hair turns gray, and how it would turn gray. Just story telling a bit from him. I find this to be a peculiar outro though.

Bottom Line:
Reks definitely proves to me that he’s a beast to be reckoned with in the real rappers’ circuit. Reks puts up a solid album, with barely (actually really none, since remixes aren’t really songs) any guests, and still shows he can make a solid album without having guest verses. He brings simple, soulful, yet meaningful production into his works, which really make him shine. Although he had a few trips on the album, most of the songs do have a great meaning, and Reks is quite sincere about this. Good album in general