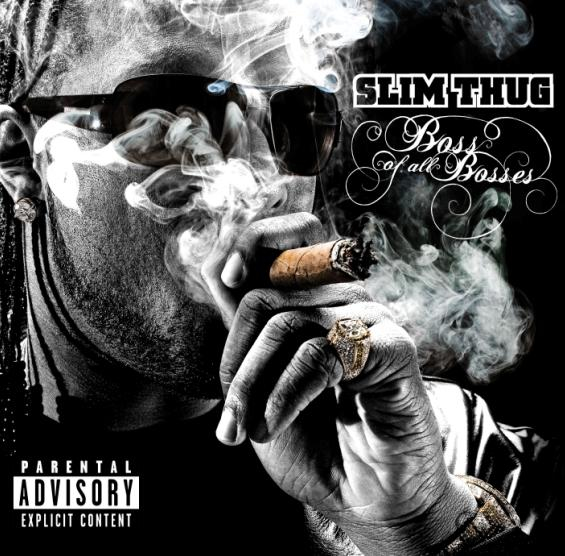 I said this before, but I’ll say it again: If I had to choose my favorite rapper out of Houston, it’s a good chance it might be Slim Thug. No disrespect to Scarface, Bun-B, or Pimp C (All are legends; Two are also technically from Port Arthur, Texas). Didn’t his verse & hook help lead the way for H-Town on “Still Tippin” (A song that basically introduced the rest of the country to Houston Hip-Hop). Maybe it’s that I feel that Slim Thug never really got the shine he deserved. In 2005 when Houston Hip-Hop was really booming, Mike Jones, Paul Wall, Chamillionaire, & Slim Thug were all at the forefront and all released albums. The only one out of the group to not receive a Platinum plaque was Slim. While Slim Thug’s first album Already Platinum did eventually go Gold, the album’s sound didn’t exactly scream Houston and was heavily produced by The Neptunes (Well, he was on their label, Star Trak). After releasing two albums with his crew Boss Hogg Outlawz in the past few years, Slim Thug is finally back with his new album Boss Of All Bosses.

1. Boss Of All Bosses
Produced by Terry “T.A.” Allen
Slim Thug starts the album over a grand sounding intro. He goes in about such things as people stealing his style, his grind, and how he’s gonna keep talking about his cars. Thugga’s voice and delivery is what gets him over and it shows here. He had the whole “boss” thing wrapped up until Ricky Ross came on the scene. Damn you Ross.

2. I’m Back
Featuring Devin The Dude; Produced by Mr. Lee
As soon as I hear this song I shake my head. It’s not really Slim Thug’s or Mr. Lee’s fault. This song is not bad at all; it’s actually good. It’s just that I already heard the original version produced by Dr. Dre and it’s way better than the one here. This reminds me of what happened to Thugga on “I AInt Heard Of That” (Where the original version featured Jay-Z). The song is basically Slim Thug’s reintroduction into the game with another one of my Houston favorites Devin The Dude. (Shout out to Pitbull in the forums)

3. I Run
Featuring YelaWolf; Produced by Jim Jonsin & J.R. Rotem
This was the first single off the album and personally I would’ve gone with another choice. I’m not feeling The Flock Of Seagulls sample. It’s does make me think about Grand Theft Auto: Vice City. I guess that’s cool.

4. Show Me Love
Featuring & Produced by Mannie Fresh
I haven’t been feeling Mannie Fresh’s most recent productions, but I didn’t mind this one at all. By the title you should already know the subject matter: showing off & flossing. This is Slim Thug in his element. Mix that with Fresh delivering the hook over party ready beat and you have a success.

5. Smile
Produced by Jim Jonsin
Jim Jonsin returns with his second production off this album with better results. Even though Slim basically talks about haters and how their women want him, the beat really gets this song over. It wouldn’t surprise me if this turns out to be the second single.

6. Top Drop
Featuring Paul Wall; Produced by Ke’Noe
Slim Thug keeps a Houston tradition and makes a song about his car (Complete with a Screwed Up hook). Producer Ke’Noe gives Thugga a good track that plays well with the subject matter, but the song as a whole is average. Paul Wall…just does Paul Wall (Is it me or does all of Paul’s verses sound exactly the same).

7. Thug
Produced by Mr. Lee
This song samples Eazy-E’s “Eazy-Duz-It” (Michel’le’s part to be exact: “He once was a thug from around the way”). Slim Thug rhymes about keeping it thug: “Real trill niggas, let me see your hands. I do this for the streets I ain’t trying to make you dance” The beat is well produced and makes a good use of the sample even though I can see how it can annoying.

8. Leanin’
Featuring UGK; Produced by Mr. Lee
Being that Slim Thug is from Houston, its Texas state law that he haves UGK on his album. I’m a UGK fan but for some reason this song struck me as boring. Its definitely the style of music that done in Houston (Maybe I’m not feeling it because I’m not from there).

9. My Bitch
Produced by Mr. Lee
Here Mr. Lee flips “Faded Pictures” by Case & Joe to good results. Thugga goes over the standards of having a “down ass bitch”. This is certainly not original and clichéd as shit, but over this infectious beat it’s a guilty pleasure.

10. She Like That
Featuring Killa Kyleon; Produce by Mr. Lee
Another song for the ladies huh? The last song was a guilty pleasure but this one is just painful. I think they tried to cover all the rap stereotypes here (Talks of “ice” and a girl liking his style). They even threw in Auto-Tune for good measure. Pass.

11. Associates
Featuring J-Dawg & Z-Ro; Produced by Mr. Lee
Here’s another subject matter that’s on a lot rapper’s albums: friends turning to enemies (back stabbers, snakes, rats, “frenemies”…you get the point). The song really doesn’t do anything noteworthy. J-Dawg sounds a little like Daz and Z-Ro’s trademark singing on the hook fits. And is it just me or do rappers always use electric guitars when talking about this subject. Average track.

12. Hard
Featuring J-Dawg & Scarface; Produced by Bigg Tyme & J-Moses
This song starts out awkward; which is sad because Scarface starts it off. I think it’s how they placed the sample. I also don’t understand why J-Dawg is on back to back songs. I know he’s part of Boss Hogg Outlawz but still. The song deal swith growing up hard and the end results is another average song about this topic.

13. Welcome 2 Houston
Featuring Chamillionaire, Mike Jones, Bun B, Paul Wall, Yung Redd, Lil’ Keke, Z-Ro, Mike D, Big Pokey, Rob G, Trae, Lil’ O, & Pimp C; Produced by Mr. Lee
Damn. Now this is way to end an album. Slim Thug puts on for his city to the fullest and gets some of Houston’s finest to lend verses to the song. This makes me want to sip on some purple lean, jump in my candy painted Cadillac, and listen to DJ Screw while crushing down the north side of Houston. Since I don’t do or have any of these things, I guess I can just say I like the song.

Bottom Line:
Even though there were times when I really enjoyed this album, I still can’t give it a 4 Star rating. Some tracks were good while others felt like filler and paint by numbers. The beat were good while Slim Thug has a good delivery and a unique voice but he doesn’t really go further that his usual cars, women, money, & gangsta script. I understand about establishing his sound but you can do that while giving a peek that there’s something more. The win here is that this album is more representative of Slim Thug than his first album Already Platinum and I’m sure this one will make Houston proud.