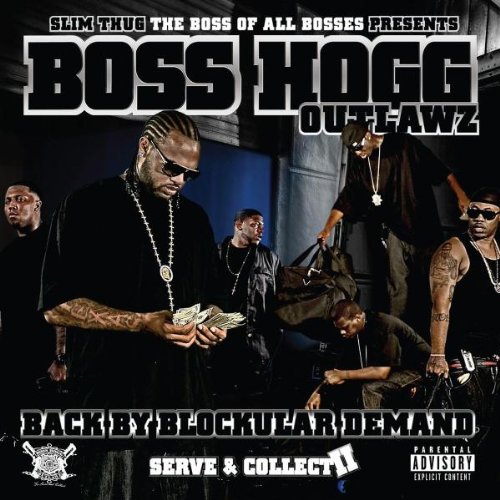 A few years ago when Hip-Hop turned its eye towards Houston, the forerunners of this new movement were Mike Jones, Paul Wall, Chamillionaire, & Slim Thug. While all of these rappers achieved success with albums, the only who didn’t gain platinum status was Slim Thug. But for some reason, I always preferred Slim Thug out of the whole bunch. I thought his major label debut Already Platinum was good and if you long time readers cam remember, I even featured Boss Hogg Outlawz’s “Recognize A Playa” as an early Song of the Week (And that was on the old site). It’s funny; I love intricate lyrics. I dissect Nasir’s “I Gave You Power”, love the wordplay of Biggie’s “Kick In The Door”, & think Ras Kass is highly underrated. However when I listen to Slim Thugga or Boss Hogg (consisting of Slim, PJ, Young Black, Chris Ward, J-Dawg, & Killa Kyleon) I take that hat off and just enjoy the gangster shit of it. Slim Thug brings back his crew Boss Hogg Outlawz to follow up their 2007 album Serve & Collect with their new album Back By Blockular Demand: Serve & Collect II.

1. No Ceiling
You know the Outlawz are keeping it straight Texas when the first track starts off with a screwed up hook. The song is about riding through the town with the top down. A lot of flossing and bragging on this one but it does what it’s supposed to. Each member turns in good performances and the track makes for a fitting intro.

2. Like Me
I told you in the beginning that this album was gonna be full of gangster rap and telling by the second track, I was right. This song has the crew talking about what kind of men they are. Slim Thug explain his hood connections; “Still chill in the hood where they selling packs/Can’t stay away too long might have to move back.” But Killa Kyleon steals the shows with lines like: “All on Wayne dick, got they chains hanging/On Game dick/Now there niggas gang banging?” Nice.

3. Lookin’ Clean
This is officially the first song I’m not feeling. It’s not bad but how many times do you gotta hear that fake Curtis Mayfield singing on the “I’m a playa” song. The organ sounds are not bad but get redundant too.

4. Living Without
See this is way I try not to overlook any album. This track is defiantly a gem and not just for this album. The dusty sample use might surprise people, but it’s done well. The song deals with being addicted to excess and reasons why. It might not be The Roots but dammit it’s still Hip-Hop. If you can’t tell by now, this is by far my favorite song off the album.

5. Time
Featuring Lil’ Keke
This song features member J-Dawg and Houston mainstay Lil’ Keke. While the production on the song is serviceable, I could never get by the way J-Dawg raps. Keke has an acceptable verse but I never got into this one.

6. Serve & Collect
This song has Slim Thug doing a sort of roll call of the Boss Hogg Outlawz members. Each member gets a verse and shows how they represent that uh…”Hogg shit” (Their words not mine). The song is good quality, but I’m kicking myself because I can’t remember the sample used to save my life. I think Trina used it on “The Big Lick”. Did I just reference Trina? (I later found out it was “Smiling Faces” by The Undisputed Truth)

7. Rap Reality Show
This is the Killa Kyleon solo joint. I still kinda surprised that the beats supplied on this album so far are higher quality that I expected. I thought the title of this song was stupid until I heard it on the track (It deals with rappers becoming fake thugs once they become famous). This song proves that next to Thugga, Killa is the standout member.

8. Hood Superstar
Yeah, this title could have been more original. I think this is a solo track for Young Black but don’t kill me if I’m wrong (let’s be real, I don’t think a lot of people know the names of the entire crew). There’s really nothing special about this song other than it uses the hook from the Ghetto Boys’ “My Mind Playing Tricks On Me”; . “I make big money, I drive big cars, everybody know…”.

9. Keep It Playa
Featuring Ray J
This is the first single off this album. I understand why they feel the need to go get Brandy’s little bro and aim for the radio, but did they really think this was gonna get them noticed in the big shuffle? It’s not terrible, but it’s strictly for the ladies and I wouldn’t play this for mine.

10. Give Me Some
Is this another “down ass hood chick” love song? Yep, but I guess they tried something different here with the production. They use an old sample but after the first 10 seconds it gets annoying. You probably should go back to the thugging fellas.

11. Cost To Be
For some reason this song reminds me off Luniz’s “5 On It”. The song contains more flossing, bragging, and the work you put in to get to a boss level. The song is average and I’m just happy it’s not another song for the women folk.

12. Keep It 1000
At this point, I’ll be the first to admit that the money and gun talk get to be a bit much. “Your bitch ain’t shit if I ain’t tappin’ it/My pants can’t fit if it ain’t a strap in it.” I said it before, I don’t have a problem with gangsta music, I just like it to be creative and talented. This is not that.

13. Wet Paint Dripn’
Of course you know what this song is about; candy painted cars. Actually the beat is well produced but I never really ever liked song about cars. If this is your kind of thing, I guess it gives a shout out to the car culture in Houston. Not much here for me either.

14. Fuck You Mean
This track has no hook just each member rhyming back to back. The beat is laid back but still up tempo and fits well. This song is you cipher track off the album and it shows that the crew has rhyming talent. Standout track.

15. Man I’m A G
Here the Outlawz show some storytelling skill and gives three real life stories about the evils of snitching. I don’t know if it’s the best way to officially end the album but the point gets across. The piano driven track is okay; the hook not so much.

16. Lord I Know/It’s Goin’ Down
Of course you know on any gangsta rap album there is the obligatory “God I didn’t mean it” track at the end. What can I say about this track? It is what it is; nothing new. The hidden bonus track “It’s Goin’ Down” is a solo Slim Thug track that should have been the main album.

Bottom Line:
Even though I like Slim Thug (That new track he has with Devin is fire by the way), I’m not so sure if he’s ready to lead a team to the championships. Even though this is the Boss Hogg Outlawz’s sophomore album, Thugga needs to brighten his star before letting his brethren shine. Each member has talent but it hard to show it when you 6 deep. The album is full of gangsta shit (if you like that kind of thing), but after listening to this album a few times, they do show that with the right beat there are glimpses of high-quality.