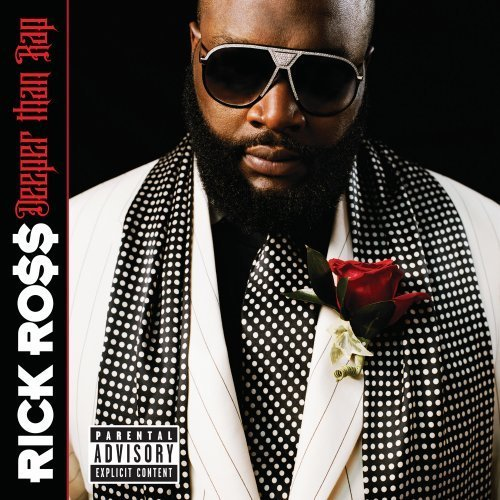 Rick Ross hit the studio and returned with his third offering titled Deeper than Rap. This is coming off the heels of a “feud” with 50 Cent that turned your typical rap battle into a scene from MadTV. Putting all of that to the side, Ross is focusing on making the best music to date and getting his credibility back. He didn’t leave the “battle” with 50 unscathed, but the lumps he took he brushed them off and came even harder. Will this be enough to sway the listeners in the middle? Let’s go Deeper than Rap.

Mafia Music
Produced by The Inkredibles
The album starts off over some dark production and Ross spitting some “real life” lyrics that gives you the backdrop to his life. This is the song that started all the “beef” with 50. Even after listening to this song numerous times, I still think that Ross is spitting some FIRE on this track. BLAZING!

Maybach Music II
Featuring T-Pain, Kanye West, & Lil’ Wayne; Produced by J.U.S.T.I.C.E League & Kanye West
This is the sequel to the original, this time no Jigga, but he did add Weezy, Kanye, and T-Pain on the hook. This song didn’t grab me like the original, but that is not a knock at the song. I just HATE sequels, because it will always get compared to the original. All three of the artists on the track brought it, and if you love collabos…this is one for you.

Magnificent
Featuring John Legend; Produced by J.U.S.T.I.C.E League
Ross smoothes it out on this one with John Legend crooning the hook over some Cognac smooth production provided by J.U.S.T.I.C.E League. What I really love is the way he made Special Ed relevant again by using his “I’m the magnificent with a sensational style”. Check for the remix featuring Special Ed on it coming soon! HOT!

Yacht Club
Featuring Magazeen; Produced by J.U.S.T.I.C.E League
Four songs in and I think this might be my song for the summer. I said earlier that the production on this one puts you in the mind of the original “Maybach Music”. The production is so CLEAN and Magazeen on the hook goes well with the vibe and Ross’ lyrics. BANGING. When I get my first yacht…this song will be the first one I play.

Usual Suspects
Featuring Nas & Kevin Cossom; Produced by The Inkredibles
Ross and Nas on a track? That is what I was thinking before I heard it. Nas has surprised me lately, jumping on a lot of high profile southern tracks. On this track both artists seemed comfortable and the collab didn’t feel forced. For Ross to hold his own with a living legend showed his artistic growth since Port of Miami. This is that HEAT.

All I Really Want
Featuring The-Dream; Produced by C “Tricky” Stewart
After five songs that were BANANAS, Ross goes club on this one featuring “The Radio Killa”. Once you get into the song, it really isn’t bad at all. Once the song grows on you, you will find yourself bobbing your head to the beat.

Lay Back
Featuring Robin Thicke; Produced by The Runners & Eric Hudson
At first I thought this was Usher, but then I read the credits and found out that it was Robin Thicke. This sounds like Ross’ version of “Whatever You Like”. I’m not mad at the dude for making this kind of song, because he didn’t go all girly with the beat. I can see this one playing in the club and I could see this one playing while you are with your shorty. The two made for a good collabo.

Murda Mami
Featuring Foxy Brown & Magazeen; Produced by Bigg D
Ross and Foxy got together and made a BANGER! Foxy held it down, but the track kind of swallowed her a bit. Ross continued to spit some of the illest bars of his career. The production on this one was gangsta and the reggae at the end sealed the deal.

Gunplay
Featuring Gunplay; Produced by The Inkredibles
This sounds like a beat that Jay used on “All I Need”, but Ross took it and put his touches on it. The street dudes will love this track, just off the title alone. The hook is what I like about the song so much. CHECK FOR THIS ONE.

Bossy Lady
Featuring Ne-Yo; Produced by The Runners & Ne-Yo
Ross went and got Ne-Yo to croon on this track aimed at the ladies. This one might be aimed at the ladies but Ross kept it “G” on the track. Fellas, you don’t have to feel bad about bumping this one loud.

Valley of Death
Produced by DJ Toomp & Gorilla Tek
Toomp lends a hand to the Boss on this one and the results are CRAZY. Ross throws some shots at 50 in the first verse, but he doesn’t waste too much time beating a dead horse. He also goes in on the controversy of the C.O debacle that he was involved in. Ross got personal on this song, which is a side we never have seen from him. BANGER.

Bottom Line:
Rick Ross clearly shows that Curtis “Curly” Jackson doesn’t have the same pull that he used to have when he was the career killer. To steal a quote I read about the album: “Rick Ross did not make one single redeeming positive word, line, couplet or theme in the whole damn thing. It’s negative, nihilistic, self absorbed, hyper violent utterly amoral rap (not Hip-Hop) about selling drugs, killing people, hating people and taking other men women, fucking them and discarding them like trash” ©Binlahab. And that is exactly why I love this album. Ross stuck to the script, upgraded his rhymes, and upgraded his production and came away with what may be considered album of the year. Ross keeps getting better with every album, and if this is a sign of things to come, the Boss could become “the Down South Biggie”.