Poll Question: Deeper Than Rap or Asleep In The Bread Aisle? 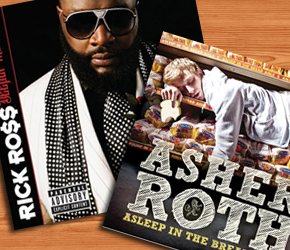 Okay, so finally both albums by Asher Roth and Rick Ross have officially been released. And both album couldn’t be any more different. We at nappyafro have also released our reviews for both albums: King Jerm’s review of Deeper Than Rap & B-Easy’s review of Asleep In The Bread Aisle. You’ve seen the ratings and we’ve seen the comments/emails. Why not put it to a vote which is best? So, cast you vote to see who has the better album: Asher Roth or Rick Ross? Don’t be scared… (Update: Poll closed on Friday. Ross by a nose!)