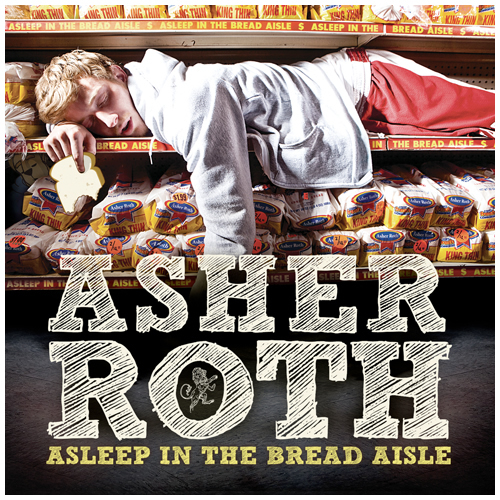 Straight outta the suburbs of Morrisville, Pennsylvania comes Asher Paul Roth. A great white hype? Naw, we already got Marshall Mathers for that title. Not to say that Asher Roth doesn’t owe Eminem some thanks. He’s been a called a less psychopathic and safer version of Slim Shady. Backed by a hit single (“I Love College”) and industry buzz (The DJ Drama co-signed mixtape The Greenhouse Effect & an XXL cover), Asher Roth may be positioning to Hip-Hop’s next big …uh, white thing. Let’s see if his debut, Asleep In The Bread Aisle, lives up to expectations.

1. Lark On My Go-Cart
Produced by Oren Yoel & David Appelton
Asher starts the album off strong. The beat is kinda quirky but it works very well and like what first tracks off debut albums should do, it introduces the artist to the listeners. Asher doesn’t get out shined by the beats though; he does his thing too: “Poor metaphor, pedicure, get you feet fixed/Walk in my shoes for a few you gone need it.”

2. Blunt Crusin’
Produced by Oren Yoel
The title accurately describes the subject matter; it’s Asher and company riding around and smoking out. The track’s tempo and Roth’s lyrical style are slower than the previous and almost throws you off. The song is okay. It may appeal more if you listening and doing the same as it states. I’m so-so about this one.

3. I Love College
Produced by Mike Caren & Ben Allen
Yeah, this is the one most people have heard. The song may be about smoking weed, keg stands, and double bagging it, but you can’t deny how appealing it is. From the sing-along hook to the call & response of “Do something crazy! Do something crazy”, this song was made to be a college party anthem. The collegiate theme didn’t stop rappers like Jim Jones, Chamillionaire, and Bun-B from jumping on their own versions of “I Love College”. I’m still wondering did I like it better with the Weezer sample as it had on the original version.

4. La Di Da
Produced by Don Cannon
Cannon! I’ll admit when I saw Don Cannon was producing this track, I was expecting him to provide something for Asher to go hard on (Pause). But this is nice also. Instead we get Asher rapping about persevering in the face of adversity and his rise to rap stardom (Including when he auditioned for Jay-Z). The message is good, the beat is cool, but it does sometimes come off as after school special. Still a good listen.

5. Be By Myself
Featuring Cee-Lo; Produced by Oren Yoel
I can immediately tell why Cee-Lo was featured on this song; this song reminds me of something that would have been on Gnarls Barkley’s last album. The whole song has Asher rapping about how he doesn’t really want nor need a girlfriend at this time in his life. The track is well produced and Cee-Lo does his thing on the hook, but Asher doesn’t deliver any bars worth mentioning. It’s an average track.

6. She Don’t Wanna Man
Featuring Keri Hilson; Produced by Oren Yoel
Who idea was it to put Asher Roth and Keri Hilson together? To me it just doesn’t fit. I guess this the flip side of “Be By Myself”; this time the girl doesn’t want a relationship. You can tell they went for club/radio play here. That’s works sometimes just not here.

7. Sour Patch Kids
Produced by Oren Yoel
Here Asher tackles serious issues such as poverty and the environment. I feel his message but here Asher shows some weaknesses in his flow; it gets dull (“Donate your dollars, raise a dollar, help a mother, save a father”). Sometimes it’s not what you say it but how you say it. He sounded better talking about bongs.

8. As I Em
Featuring Chester French; Produced by Oren Yoel & David Appleton
Hey, you gotta applaud Asher Roth for attacking this issue head on. He does sound a lot like Eminem. But Roth does break down the issue and admits that the two rappers do have “similar voice inflection” as well the high bar than Eminem has set for white rappers. It’s a well thought out song that help gets Asher’s point across.

9. Lion’s Roar
Featuring Busta Rhymes & New Kingdom; Produced by Oren Yoel
Asher gets Busta to talk about sexual prowess while Oren Yoel comes through once again and drops another good production. The song as a whole is good and Busta kills the cameo with the fast flow. That’s all I really have for this track. Side note: New Kindom is Orel Yoel’s band.

10. Bad Day
Featuring Jazze Pha; Produced by Oren Yoel & David Appleton
I was so happy when I found out that Jazze Pha didn’t produced this track; that would have been horrible. This song shows Asher’s strength in storytelling and he tells a tale about what else, a bad day. It’s not Slick Rick but it’s funny. Oh yea, he sounds a lot like a young Eminem on this song.

11. His Dream
Featuring Miguel; Produced by Oren Yoel
This is another track that has Asher storytelling. Then again, I don’t know if this song is about his father or some random 56 year old man. (*Listens to it again*) Okay, I’m now sure it’s about his father. For some reasons this song reminds me of Lupe Fiasco’s “He Say, She Say”. It’s also a heartfelt dedication to his father.

12. Fallin’
Produced by Nottz & Novel
Powered by a Ben Kweller sample, this track has Asher explaining his relationship with Hip-Hop and how it came to be. It’s not a bad song, just another average one. The use of the sample here can get boring though.

13. Perfectionist
Featuring Beanie Sigel & Rock City; Produced by Oren Yoel
I already talked about this track previously here. It probably should have been a regular instead of a bonus track.

Bottom Line:
Okay, let’s just attack the elephant in the room. Asher does in fact sound a lot like Eminem. It’s really no getting around it (Asher even admits it himself). It will take a lot for people to put that to the side and look at him without the comparisons. If they do that, they’ll find a fun and well put together album. The production on the album didn’t feel out of place and all the tracks fit together nicely. While it is Asher Roth’s debut, it’s also a coming out party for producer Oren Yoel. But I also feel like Asher may have been rushed. Like, he needed time to grow before making an album. In all honestly, I’ll probably keep 4 tracks off the album. Not because the rest of it is not good, just not memorable (Or maybe just not for me). But hey, that’s not saying I’m not looking forward to more music by Asher; dude still can rhyme.