Soulja Boy Is The KING Of Atlanta 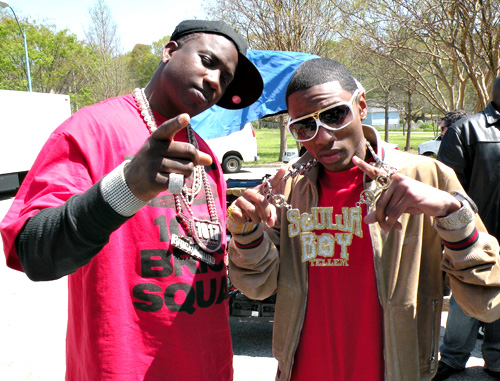 Yeah, I said it! Deandre “Soulja Boy” Way is the new KING of Atlanta. T.I. is on a little hiatus and it is only fitting to give Soulja Boy the crown while T.I. is away. A while back we did a list to see who was the King of Atlanta, and now looking back at that list Soulja Boy is the most qualified candidate for the job. T.I. is on a vacation, Jeezy fell back after all of the Obama buzz he had, Andre 3K isn’t interested in being the King of Atlanta, Luda is becoming a thespian that raps well, and Gucci…he is the other candidate I was considering. Gucci has the hood support, but that support doesn’t transfer into sales. Let’s be honest, Madison Ave. is not beating down Gucci’s door. When you add all these things up, Soulja Boy has the better stats. Soulja Boy sells albums, he has his own shoe, is a multimedia juggernaut, and most importantly…the ladies love him. Sounds like a King to me. If Soulja Boy keeps this up, T.I. might have a problem taking the crown back when he gets home. They are already calling him a young Russell Simmons, and that isn’t a bad thing to be called. ALL HAIL the KING!