Song of the Week: West Coast Rap All Stars – “We All In The Same Gang” 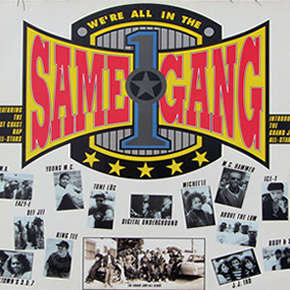 “My baby ain’t never hurt nobody, but he still got smoked at Bay Bay’s party!” If you are old as me, then you immediately know what I’m talking about. For all of you that were too young to remember that line by Eazy, it comes from the West Coast Rap All Star’s record “We All in the Same Gang”. This was their contribution to the Stop the Violence Movement that was going on in the early 90’s when things were pretty bad. We had brothers dying over nothing, senseless killings, high rate of crime, and brothers getting locked up at an alarming rate. Sounds like 2009 doesn’t it? At least the rappers of yesterday ACTED like they cared about what was going on, but then again we were dealing in a different time. I’m not saying that these rappers of today need to come together and do a remake of these songs, (actually I am) but it would be nice to hear a change from ME , ME, ME to US, US, US. Like the song says…WE ALL IN THE SAME GANG! This is King Jerm educating the youth again, so I hope you enjoy this installment of Song of the Week!

Download: West Coast Rap All Star’s – “We All In The Same Gang”