The Secret To Success 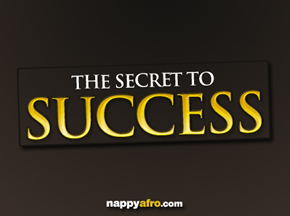 Damn it’s been a while since I last dropped something for The ‘Fro (almost a month ago with Alchemist’s Chemical Warfare album review), I guess Hip-Hop music ain’t the only one that’s been in a drought for the month of August. But nonetheless in my absence I’ve been listening to a lot of music both old and new, and it got me to thinking about the current state of Hip-Hop and the music industry in general as it relates to artists. As you most likely have noticed over the last few years, the genre of Hip-Hop has probably been one of the most expansive in the music industry with new artists, producers, and DJs seemingly starting careers everyday. But in light of all of these new additions to the game, very few of them ever see the success that they strive and dream of when starting their careers.

Success in the realm of Hip-Hop has come in a different styles and forms, whether it’s viral video rise to fame (Soulja Boy Tell ‘Em) or mixtape industry domination (50 Cent), with every new artist and producer searching for the formula to their own success. But for every one success story there are often hundreds more that never reach that plateau and those that never reach that level often wonder why. While it can be said that many different elements apply when describing success and what’s needed to be successful, the one major aspect that many artists and producers overlook when it comes to their own careers is Originality.

Think of all of the Hip-Hop artists, producers, and DJs that have achieved and are achieving success in their careers over the years: Jay-Z, Nas, The Notorious B.I.G., 2Pac, Snoop Dogg, Marley Marl, DJ Premier, Pete Rock, J Dilla, Dr. Dre, 50 Cent, Soulja Boy Tell ‘Em, Drake, DMX, Big Pun, Lil Wayne, T.I., Jam Master Jay, Kid Capri, DJ Jazzy Jeff, Twista, Bone Thugs-N-Harmony, Run-DMC, N.W.A., Wu-Tang Clan, Outkast, Mobb Deep, UGK, Little Brother… The strengths and weaknesses for these various individuals can differ but the one thing that remains the same is originality. Out of all of the names listed they can all be stated as being different and having an identity and not being the same or a copy of somebody else.

With the unparalleled amount of artists, producers, and DJs that are trying to make a name for themselves in the music industry, the one thing that I can attest as to why a majority of them aren’t seeing the same success as their peers is because originality isn’t present. When it comes to an artist like Soulja Boy, it’s a fact that his love/hate ratio with listeners greatly favors the latter, but it can’t be argued that he lacks originality when compared to other artists that might be more skilled on the microphone. I remember a couple years ago back in a music business course I was taking I was asked the question of in a given scenario of having my own record label if I would sign an artist like Soulja Boy or an artist with better skills and ability, and of course I selected the better skilled artist almost instantly. I made this selection based off my knowledge of Soulja Boy’s music and being the kind of listener I am who favors lyricism over lucrative, but failed to see the real deciding factor between the two being originality. Sure Soulja Boy’s lyrics are mediocre and lack substance, but his originality stand atop his characteristics. Given a rapper that’s lyrical and better skilled, how much different would he be from the 25 other lyrical emcees in the same position trying to get signed for a record deal compared to an artist like Soulja Boy Tell ‘Em.

Soulja Boy’s career took off based on an instructional video for his song “Crank Dat”, which led to him signing a deal with Mr. Collipark and Collipark Records. Soulja Boy saw his success from the creation of a viral video that was uploaded on YouTube and that’s where his originality comes into play. Ever since then, countless artists have been uploading videos hoping to be the next artist discovered this but unfortunately it won’t happen. 50 Cent’s career took off after the release of three mixtapes in 2002 (50 Cent Is The Future, No Mercy, No Fear, God’s Plan) that led to him signing a deal with Aftermath and Shady. 50 Cent saw his success from dominating the mixtape industry with multiple mixtape releases when nobody else was really controlling it. You already know how many mixtapes artists release nowadays on the Internet for free download and/or purchase, but the same results that 50 had with it won’t be seen with them.

Just using the examples provided in the cases of Soulja Boy and 50 Cent’s careers they defined their careers by venturing into areas that were previously uncharted and doing something different that everybody else wasn’t doing at the time.

As an artist sure you could upload a video of you freestyling or a low-budget video of your latest “hit” single, but who hasn’t already done that before you. You could release a new mixtape every other month for listeners to be able to download for free, but who hasn’t already done that before you. Following trends and doing the same thing that every other artist is doing won’t portray you as original or different, it will just place you in the category of being the same as everybody else and not bringing anything new to the table. This has been Jay-Z’s key to success for his entire career and it’s no wonder as to why he has been so successful with his music. From putting away throwback jersey and donning more appropriate “grown folk” attire to soul sampled beats on Blueprint to “D.O.A. (Death of Auto-Tune)”, it’s all examples of originality and going against the grain of what’s popular and what everybody else is doing. So while skill, passion, and dedication are some of the necessary aspects to becoming successful in what you do, the biggest one of all is originality.