Why Jay-Z Should Be Man Of The Year 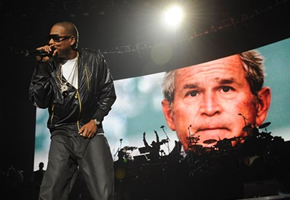 Now when I saw the category of “Man Of The Year” I didn’t know exactly what to think because in my mind that would definitely go to the President-elect Barack Obama for his major accomplishment. But I’m guessing that we’re keeping it Hip-Hop (like Barack isn’t Hip-Hop) and with that in mind, my choice has to be Jay-Z for the year. Now I know everybody already thinks that 2008 belonged to Lil’’ Wayne, but if you look at the big picture and what the title of “Man Of The Year” means then you have to give the award to Jay…let me explain.

Even though Jay-Z didn’t release an album in 2008 (Blueprint 3 coming 2009) he still managed to do more for Hip-Hop music regardless of the fact. He headlined a major international festival being Glastonbury amongst the animosity and anger he received from Oasis’ Noel Gallagher. He completely smashed the show and brought the Hip-Hop industry across the seas as the first Hip-Hop act to play the festival. That’s a major milestone for the genre and will certainly open the doors for artists like Lil’ Wayne to be able to do the same in the future and be accepted as a Hip-Hop artist. He married arguably one of the hottest women on the planet in Beyoncé Knowles after there tenure of dating. Even though they kept it discreet, we all knew what the case was with Hov & B. Now watch all of these other rappers try to go out a put a ring on some chick’s finger (probably an R&B singer’s). He was able to land a $150 Million deal with Live Nation, which is one of the richest contracts ever offered to a musician. He teamed up with Mary J. Blige to put on a very successful Heart Of The City tour and he still leads the rest on the Forbes list as the most successful rapper currently.

Lil’ Wayne definitely reached another level this year with Tha Carter III being the highest selling Hip-Hop album of the year and accomplishing the near impossible feat of selling a million copies in the first week of its release. Weezy also had the most freestyled over song of the year in “A Milli” which has also put Bangladesh on the map as the go-to producer for a hit single (Beyoncé – “Diva”…the formula still works). This year also saw Wayne garner the most support and popularity seen recently for a rapper. From the rock star image to styrofoam cups to tattoos, everybody was trying to get on Wayne’s level with their own swagger. This was definitely Wayne’s breakout year much alike to Jay-Z back in 1998 when Vol. 2… Hard Knock Life was released and everybody started catching on. Things can only go up for Wayne at this point in seeing his image grow even larger (hopefully without his ego doing the same), but I think Jay-Z’s accomplishments and work top much of what Wayne did this year. Keep in mind that Jay did it all without releasing an album, not if Wayne hadn’t released C3 I don’t think we would even been talking about him like we were this year.