Ask Hov, He Don’t Want It With Curtis… 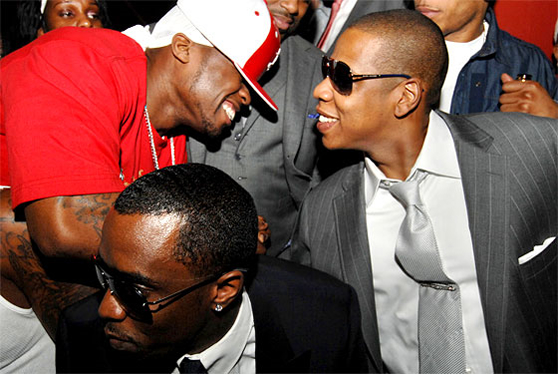 Ever since 50 Cent declared his next target would be one Shawn Carter, fans have been clamoring for the rap beef of the century. Bloggers have speculated that given 50’s ruthless nature in battle mode; its easy to see how Curtis would be one of the most formidable opponents Hov has ever faced.

But since 50 first fired a few shots over Jay’s bow, S. Dot has declined to respond. In fact, all we’ve heard from Jay has been subliminal shots – one on “Thank You” (I was going to 9/11 them, but they did it to themselves”…) and another during his acceptance speech at the American Music Awards (”Women lie, men lie – numbers don’t.”)

But other than that, Hov has given 50 the same attention as Game, Peedi Peedi and other aspiring challengers. So, what’s up? Hova fans (including myself) would welcome the opportunity to see Jay body Curtis on a track – no subliminal shots, no speculation; more like “Takeover 2”. Yet we’ve heard nothing from Jay, save for those light jabs.

I suspect the reason for that is simply because Hova is the only one of them that has anything to lose – and not necessarily on wax, either. Jay has his discography, his #1 albums, his time as label president, his clothing line – his legacy is secure. Not a lot of rappers, deceased or living, have been called “The Greatest Rapper of All Time”, whether or not Mos Def thinks its true. Hova really has nothing to prove.

Of course, 50 Cent would welcome an opportunity to boost his sales and his profile taking on a titan like Jay-Z. 50’s clearly not worried about taking an L; he’s done it before (Kanye, The Game). He knows beef I’d good for business. So its not like Curtis Jackson wouldn’t be a willing and eager participant.

No, the reason I think Jay has stayed far away from Curtis is because Jay has one area where he can lose and lose big – his life out of the booth. And I don’t mean physical violence, but someone peeling back Jay-Z’s layers of secrecy and privacy for all the world to see.

From Beyonce to Rihanna to his tenure as Def Jam President to his business dealing with Dame and Biggs, to his reputation in the streets, 50 has more to work with than any of his previous targets. And we all know 50 has the wherewithal and financial resources to conduct a full investigation in all of these areas.

And 50 Cent has nothing but time to conduct such a campaign: its not like Before I Self Destruct is lighting up the charts. This would undoubtedly be an entertaining diversion for the industry bully.

As we’ve seen with his Rick Ross assault, 50’s style of beef has absolutely no limits. He goes way beyond hip-hop. You can’t risk going at 50 if you have any skeletons in your closet – Boo Boo will find them and put them on YouTube. And 50 Cent has also proven that he won’t let facts stand in the way of a good attack, so speculation and innuendo is on the table as well.

Shawn is a smart businessman. I suspect there is very little chance we’re going to see a 50 Cent vs Jay-Z battle anytime soon. But given that 50 Cent spends more time with his opponents ex-chicks than he does writing devastating punchlines, I don’t think its a big loss for hip-hop fans.

***Yep. Once again we jack another great article from B-Double. As always, you can get more of this great stuff at yourfavoritewhiteboy.com