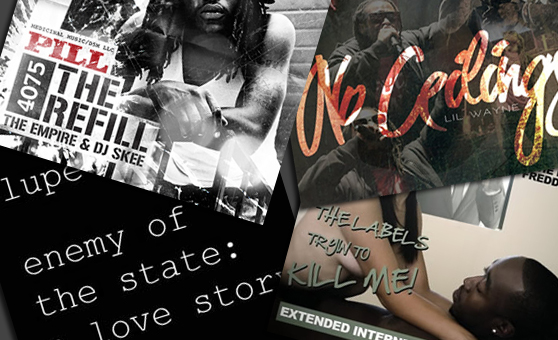 With albums getting pushed back more and more these days it seems like we have more mixtapes dropping everyday. And of course it seems like 1,421,762 rappers release mixtapes everyday. Now as you probably know, unless you have no life, it’s impossible to keep up with what’s good and what’s bad in the ever changing mixtape circuit. So your boy is here to tell you the four mixtapes you should have got in the second half of 2009 (Sidenote: Whoever sent me Bitch! This Is My Mixtape #32…STOP). If you wanna see my first 4 picks for this year, check out Part 1 of Four Must Have Mixtapes Of 2009.

Download: Lil’ Wayne – No Ceilings
Even though the mixtape didn’t keep the promise of having no Auto-Tune or no features, No Ceilings had Wayne returning to form (This is what Dedication 3 should have been). From “Run This Town” (“The pistol mean business/That bitch should have a tie on”) or “Watch My Shoes” (“Don’t splurge around no hoe/No, I don’t shine in front no bitch/Cause after she get off my dick, I be like find the front door bitch”), Weezy showed he could still take a beat and make it his own. If it wasn’t for Drizzy this might be a frontrunner for Mixtape of the Year.

Download: Pill – 4075: The Refill
The sequel to 4180: The Prescription, Atlanta’s own Pill returned to once again show he wasn’t afraid to attack any beat (Like “Kick In The Door” or Destiny’s Child’s “Jumpin’, Jumpin'”). He also included some original bangers like “We Don’t Even Know” or Tha Bizness produced “Hear Somebody Comin'”. Can’t wait to see what’s next for Pill.

Download: Freddie Gibbs – The Labels Tryin’ To Kill Me: The Best Of Freddie Gibbs
Eight syllables:81 Motherfucking songs! Yea, this may have been either an overkill or the perfect introduction to the world of Freddie Gibbs. Either way, you gotta applaud the size of the project. And it mostly good music too.

Download: Lupe Fiasco – Enemy Of The State: A Love Story
Lupe isn’t known for constantly dropping mixtapes, but Enemy Of The State was a welcome addition to Lupe Fiasco’s music library. Personally I was scratching my head when it started off with Keri Hilson’s “Knock You Down”, but by the time it got to “Turnt Up”, I was sold. This also showed me that Lupe is just in another space lyrically right now. Here’s hopping that we get another one of these by X-Mas (As promised).