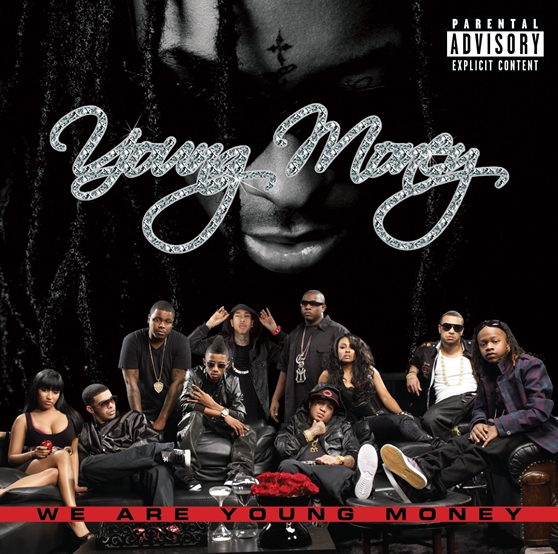 Lil’ Wayne continues his quest to rule the world with the release of HIS label’s collective effort We Are Young Money. This team features Weezy, Drake, Nicki Minaj, Jae Millz, Gudda Gudda, Tyga, Mack Maine, T-Streets, Lil’ Twist, Lil’ Chuckee, & Shanell. Not a bad lineup to have batting for you in a game. We all know that Hip-Hop and sports aren’t the same, sometimes too many stars don’t equate into a championship. One thing about YM is that if everyone plays their role, a championship isn’t out of the question. We have been hearing about Young Moolah for years, now it’s time to see if the hype was justified.

Gooder
Performed by Jae Millz, Lil’ Wayne, Gudda Gudda, & Mack Maine; Produced by Brizzy Blaize
This album starts out like any compilation: with a posse cut. I can’t even front, this song might have been even DOPER had Drizzy and Nicki would have dropped a verse. Even without Drizzy and Nicki, the song went hard. I see Wayne got his Auto-Tune machine out the pawn shop.

Every Girl
Performed by Lil’ Wayne, Drake, Jae Millz, Gudda Gudda, & Mack Maine; Produced by Tha Bizness
This is one of the songs that you heard on the radio ALL SUMMER. I knew this song was going to be big, but anything featuring Wayne and Drake on the same song is sure to put up some numbers.

Ms. Parker
Performed by Lil’ Wayne, Mack Maine, & Gudda Gudda; Produced by Tha Bizness
Okay 3 songs in and I think I have an early favorite. Everybody remember the “Ms. Parker” line in their favorite hood movie, Friday, and this is an ode to her. Weezy went digital, better yet the whole crew went digital. This song will not be a favorite with all, but I LOVE this hook on the song.

Wife Beater
Performed by T-Streets, Lil’ Wayne, Jae Millz, & Tyga; Produced by Kane Beatz
This sounds like the theme to Halloween on sizzurp. I really think they were going at the strip clubs with this one, at least that’s the mind state this song puts you in. I can rock with this one. Shout out to all the NYMPHO’S out there!

New Shit
Performed by Gudda Gudda, Lil’ Wayne, Jae Millz, & Mack Maine; Produced by Chase N. Cashe & B.Carr
Remember earlier when I said I had an early fave, change that. Unknown producers come with the HEAT. The beat starts off simple, and then opens up on the hooks. WOW. The reserves are carrying this album so far. The Weezy features are really hooks, and the role players are keeping the team afloat. IMPRESSED.

Pass The Dutch
Performed by Lil’ Wayne, Gudda Gudda, & Drake; Featuring Short Dawg; Produced by Chase N. Cashe
This is what we have been waiting on, not really because we got that on “Every Girl”, but Weezy and Drizzy on the same track (Like they haven’t done this before…heard So Far Gone?). The production on this song was too plain. The beat was easily beat up by the crew. I applaud the effort on lyrics, but they lost me with the production.

Play In My Band
Performed by Shanell & Lil’ Wayne; Produced by Willy Will
The beat from this one could have been switched on the last one and the song would have been FIRE. Once again we get to see Rock & Roll Weezy on this one, and let me tell you he didn’t disappoint. I know I said that “New Shit” was my fave. Change that, (NO H2O) this is. I really was not on board with Rock & Roll Weezy, but he might be the one to bridge this generation to the Rock/Hip-Hop trend. DOPE.

Fuck Da Bullshit
Performed by Nicki Minaj, Gudda Gudda, Lil’ Wayne & Drake; Featuring Birdman; Produced by Andrew “Papa Justifi” Wansel & Warren “Oak” Felder
The First Lady is in the building on this one and she made Weezy and Drake step their game up on this one. I have to say that Nicki SET the song off! It’s something about her style that is HOT and infectious at the same time. Gudda Gudda surprised me the most out of the bunch. He was going up against some stiff competition, sandwiched between Weezy and Minaj, him just keeping up made me happy. FIRE!

Bedrock
Performed by Lil’ Wayne, Gudda Gudda, Nicki Minaj, Drake, Tyga & Jae Millz; Featuring Lloyd; Produced by Kane Beatz
This is the current single beating the airwaves to death. Sounds like “Every Girl” to me, but this song was aimed at all those teenagers not some old cat like me. I can hate on the song. I’ll pass because I can’t say the song is GARBAGE because of its mainstream direction.

Girl I Got You
Performed by Lil’ Chuckee & Lil’ Twist; Produced by Infamous
Hold up…Wayne got kiddies in Young Money? I can appreciate what they are doing, but there isn’t a 15 year old rapper alive I can relate to. The song sounds like something I would have wrote at that age, which is what it should sound like. I don’t want to hear a 15 year old 50 Cent rapping, talk about stuff like this.

Steady Mobbin’
Performed by Lil’ Wayne; Featuring Gucci Mane; Produced by Kane Beatz
I was in the club recently when this came on…THE PLACE WENT CRAZY!!! The two hottest rappers on a song together equals BANGER! Line of the song…”You niggas softer than Roseanne’s son”. Are you serious? Stop it Wayne! I might be biased by the club atmosphere, but that is the feel you want when your song comes on.

Roger That
Performed by Nicki Minaj, Tyga, & Lil’ Wayne; Produced by Phenom
This is one of those songs that you have to sit back and let Nicki do her thing. She set the song on FIRE, but the person who made my head turn quick…TYGA. I really didn’t know he had it in him. *salutes* Of course Weezy shows up, but he got outshined by Lewinsky and Tyga on this one. DOPE SONG!

She Is Gone
Performed by Lil’ Wayne, T-Streets, Jae Millz, & Gudda Gudda; Produced by Kane Beatz
The production on this album continues to be pretty good, but this time the crew didn’t put up one of their best efforts. I don’t like the hook at all, “Where my old lady at?” Come on Fellas, really?

Streets Is Watchin’
Performed by Lil’ Wayne, Gudda Gudda, T-Streets, Jae Millz, & Nicki Minaj; Produced by David Banner
Why did he choose this name? David Banner on the beat so you know you are getting something FLAME. The boys get down on this one, but the standout again is your girl Nicki. She is going to be a hard free agent to keep on the team when it’s time for negotiations.

Nicki Minaj: “I’m the bad what bout to get a mani-ped/I’m the big bad wolf in ya granny bed/Even tho I’m in Mexico/I rep New York like Plax-ico/Look switched my name now I’m celebrating Hanukah/Lewinsky, bitches Young Money Monica/I been hot since Hedeghog Sonic the/So could you pass me the keys to the tonica/I meant Tonka/that’s the truck bitches.”

You can’t deny it…Nicki is that GIRL.

Finale
Performed by T-Streets, Gudda Gudda, Jae Millz, Tyga, Lil’ Chuckee, Lil’ Twist, Nicki Minaj, Shanell, Mack Maine, Drake, & Lil’ Wayne; Produced by Infamous & Angel “OnHel” Aponte
They end the album with a full fledge posse cut, everybody get a chance to spit on the mic. I have to say this was reminiscent to the old No Limit Soldier songs that usually start an album, but I think they placed this one in the right place. Good way to end it.

Bottom Line:
This was the first offering from Young Money, and considering their audience, this will be considered a good album. The Hip-Hop snobs will surely avoid this album because of the radio hits “Every Girl” and “Bedrock” but there are some pretty good songs that even they can appreciate. The Nicki Minaj appearances gave the album a different feel that male only albums lack. This album will be a stocking stuffer this Christmas, and those people will be pretty happy with this. If Young Money keeps this up, look for them to be one of the new age Hip-Hop “dynasties”. How about a hand for Birdman? He has put together two championships teams in two different decades. Kind of like Pat Riley. Update: King Jerm’s original rating was 3 and I mistakenly put this up as a 3.5. My bad. – B-Easy