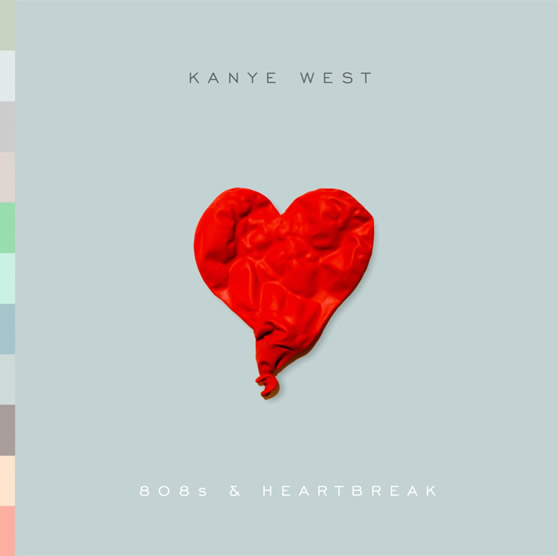 2008 was my first year on the ‘Fro, and I was doing it real big; I went from reviewing Green City and Yung Berg to reviewing T.I. and Kanye in just 2 months! The Kanye album I had been skeptical about the entire year, mainly because I thought the Auto-Tune thing was wack and seeing Kanye make an Auto-Tune only album made me double take: three nearly classic hip-hop albums and now this?! I was offered the Ludacris album that was coming out the same day, but I passed on it for 808’s & Heartbreak because I figured ‘Ye would come through.

However, my review for the album was really mixed. Some songs like “Heartless”, “Welcome To Heartbreak”, “Paranoid”, and “See You In My Nightmares” I really liked, but then there were songs like “Bad News”, “Robocop”, “Pinocchio Story”, and “Amazing” that I thought were either weak or not up to par. I ended up not committing either way and giving the album 3 stars out of 5. I’ll never forget, King Jerm commented on the review a couple days after it was put up and said:

“I promise you H2O..5 years down the line people will still throw in the 808’s just to listen to some of the gems that Ye put out on that album. It’s all about artistic expression, but it has to be done right. Kanye executed this album very well. Like I said, give it some time.”

I laughed and said “I’ll take that bet.” And here we are, only 1 year and 3 months later and I’m already giving this album another spin. And what’s worse, Jerm was right. I really like this album now. The craziest thing about it, I know why I like this album now compared to my feelings towards it when I first reviewed it: since then, I’ve experienced heartbreak and stress of my own, and that allowed me to approach the album with an open mind and re-review it fairly.

I’d been dating this girl for about three months when we had to break up mutually, but we understood that we’d get back together after I took care of some things. Well, one of my FORMER friends who had been flirting with this girl while we were going out, went after her to an obsessive level. She turned him down every time, but never really distanced herself from him because she saw him as a “best friend”, so he would never stop trying.

Well, finally we got back together a couple months later after I had worked some stuff out, but things was rocky; she had trouble trusting me and wanted a lot more control in the relationship, which I wasn’t down with. Out of nowhere, she broke up with me in a text message the same day we were supposed to see a show. I go to school the next day and what do I see? Her talking and laughing with my supposed to be friend. I have to go through my entire day seeing them walk down the same halls I do together, the same ways I used to walk with her. It’s been a month since all that had happened and I’ve tried to move on, but every time I tried she’d end up in the back of my mind and it’d be too hard.

So one day I found myself singing: “See You in My Nightmares”, and I immediately listened to the whole album again. I felt like this time, I could identify with everything Kanye was going through: “Bad News” wasn’t just Kanye trying to sing, it completely fit my situation. That feeling you get when you hear that something that was good for so long has just ended right in front of your eyes. “Say You Will” meant so much more to me. So many promises that were made to me were broken, that I just wanted someone not to just say something, but mean it. Somehow, that four minute instrumental was much more important than before. Even songs like “Robocop” didn’t seem so bad after this listen. Which shocked me, because I hated that song.

The Taiko Drums and the Synth Sounds both help to channel the emotion that Kanye is feeling, and good music is good music; the songs still hold up a little over a year later and convey that same emotion. Maybe it was just me who connected with this album recently in light of my recent circumstance, but I feel like Jerm was right; years from now, we will be checking out 808’s. Top to bottom, I co-sign this album. Except “Pinocchio Story”. It doesn’t seem to fit the album very well in my opinion. Every other song is tight to me; I’d compare this album to Kid Cudi’s with better production. While my original review was for three stars, in light of my recent listen, I’d have to award this album four stars out of five.