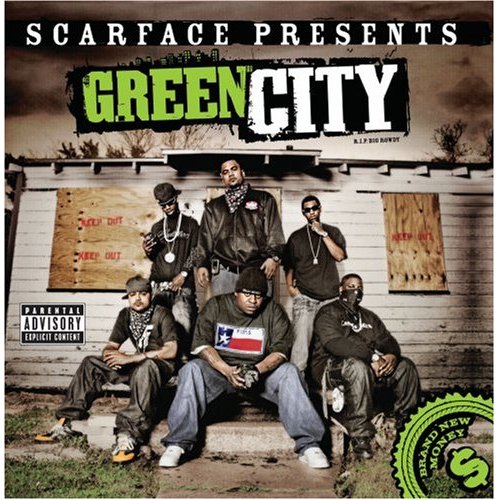 Alright, if you haven’t read my staff page, I’m young; my friends blast Soulja Boy and actually think he’s good. Because of that, I had never heard any Scarface songs until I heard him on Free At Last with Freeway. He was pretty good on that, and I was interested, so when King Jerm asked me review this Scarface related album, I was open-minded.Let’s see what we’ve got here with Scarface Presents Green City – Brand New Money.

1. Uncle Face Intro
Featuring Scarface
There’s no rapping on this one: It’s just Scarface talking about how he brought “real niggas to the game”, since there is a lot of garbage in the game. I guess they’re from Texas. Its a short intro, nothing big that you haven’t heard before. Let’s hope Face is right about not bringing garbage into the game.

2. Gotta Shine
Right out the gate, I’m liking how this sounds. It sounds legendary, like a classic kind of song. I sort of impressed with the lyricism too: “Momma help with these trials and tribulations/And help get away from all these demons I keep facin'”. I like the hook on it too; the way they made it, you’d think it would get really repetitive, but they spaced it out cleverly so that’s not the case. Good song, check this one out.

3. Dope Game
Featuring Scarface
Yeah, we all know what this one’s about. Scarface makes a quick return from the intro to take the second verse. I’m not feeling this song, only because I’ve heard this so many times before, and the people on this track really aren’t saying much. Scarface spits the best verse, but thats not saying much, to be honest. Don’t get wrong, the production and the hook make it a banger, but its average to me.

4. Do it Like I Done It
This the club hit right here, and I’m feeling this one. The beat is bouncy, and Green City is flowing nicely over this one: “I don’t need speakers/Trunk full of reefer/Gun in my left A.K.A street sweeper”. Yeah, this song is full of all that Southern swag we’ve heard tons of times, but it works pretty well here. This could be a single to me, good song.

5. Get Paper
At first I was put off by the hook, which we’ve again heard before: a chopped and screwed voice talking about money. “Get Paper, Get Cash”. But as the song went on, I started to like it. The beat goes hard, and even though the lyrics are average at best, you don’t really need lyrics for a song like this. Check this one out.

6. Good Enough To Eat
This song switches up things with a slow beat, and I’m like “uh-oh…”, cause I have a feeling I know what this one’s about. But I’m wrong (thank god!); it’s about how the sun makes their car’s candy paint look better. Well, its better than what I’d thought it would be, and I’m glad, because I like this song. At first the hook gets repetitive, but it grows on you. You gotta check this one out.

7. Caddies To Caprices
This is like the complete opposite of what the last song was; a BANGER!! The hook is hot, the beat is hot too. This IS the banger of the album right here! You’d think listening to two songs about cars in a row would make me want to skip this one, but it’s the opposite. I guess it depends on what you like: if you like a smooth beat, song 6 is better, but if you want a banger, skip song 6 and go straight to song 7. One of the best tracks

8. Twenty-Five Diamonds
No one is saying anything on this song; all about 25K Diamonds, you know the deal. The beat gets really old and annoying, and the hook is exactly the same way. Do yourself a favor, SKIP.

9. Major Grind
The first guy on this one sounds kind of bored, but the other two verses are good. I don’t know, this album is starting to drag; prodution is alright, it gets really annoying, just like the last song. Fortunately, if you can get past the first verse, it’s a decent song, and I like the hook.

10. Lookin’ Good
The beat is decent, but this song is awful. It’s almost 6 minutes long, which is way longer that it needs to be. The hook drags on much longer that it should too, and is not that good. None of the guys sound good; maybe they’re tired? SKIP

11. Swang On ‘Em
Sounds like they’re getting back on track on this one: this is much better than the last three songs. All of the guys on this one flow well with the beat. Once again, it’s nothing new, but the production is sick: it makes them sound much better. This song is almost half the length of the last one, which is good; the beat doesn’t get repetitive, and everything meshs together. One of the top songs on the album.

12. Slide Thru Killen
On this one, I guess they’re reppin’ Northern Texas. One of the best songs on the album for sure, and they all sound into it too, no slacking here. Production sounds good, nothing new from the rest of the album, and the lyrics are average. I guess it’s an okay way to end an album.

Bottom Line:
Well, like Face said, its not garbage, but it’s not like Green City is reinventing the wheel either. Even though it’s only twelve songs, after that “Lookin’ Good” song, I was ready to leave. I guess you really can’t cut much on an album like this, but track 8-10 could’ve been left off to me. As some artists, Green City is decent, but only when the production works with them; when they try to work against it, they aren’t too good. Lyrics aren’t the best, but they deliver some good bangers that you should check out.