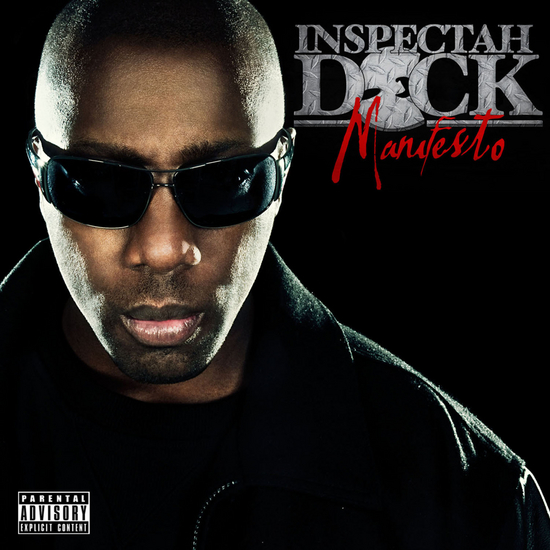 When you think of the legendary Wu-Tang Clan, members Ghostface Killah, Raekwon, GZA, Method Man, and Ol’ Dirty Bastard are the names that immediately come to mind most of the time. While it can be said that these are some of the more memorable and recognizable names from the clan, two of the group’s most underrated lyricists happen to be GZA and Inspectah Deck. In my opinion these two emcees are the most technical rappers out the group, often dropping intriguing rhymes that get the mind going. Inspectah Deck made me a fan as soon as I heard his verse on the Gang Starr classic “Above The Clouds” with lines like “I leave scientist mentally scarred, triple extra large/Wild like rock stars who smash guitars//Poison bars from the Gods bust holes in your mirage/Catch a charge, shake ‘em down like the riot squad”. After two solo albums in Uncontrolled Substance and The Movement, INS is now releasing his third album entitled Manifesto. Seven years from his last album, Inspectah Deck steps to the plate to display once again why he’s one of Wu-Tang Clan’s undervalued lyricists that deserves the same respect and recognition as his fellow brethren.

1. Tombstone Intro
Produced by J. Glaze
Things get started of with some sinister sounding production from J. Glaze who utilizes piano keys and hard-hitting drums to provide the backdrop for this introduction track from Inspectah Deck. He wastes no time coming out with a take no prisoners type of flow displaying multiple styles along the way. A very solid intro track from a rapper that hasn’t released an album in seven years, sounding like he hasn’t missed a step.

2. The Champion
Produced by The Alchemist
I remember hearing this track on Shade 45 about a month ago and being impressed with it coming from Inspectah Deck. I was more surprised to hear that the production was produced by The Alchemist who gives Deck as dark and menacing beat to work with. Adding the KRS-One vocal sample for good measure, Deck reassures listeners why he’s a force to be reckoned with and has been for years now as one of Hip-Hop’s more elite lyricists.

3. Born Survivor
Featuring Cormega; Produced by MoSS
Coming on the heels of president Obama’s history victory of passing the Health Care Reform Bill, this track utilizes snippets of the president’s speeches to help translate the message of the track. Continuing with the trend of dark productions that have been heard so far, MoSS is the producer behind the boards on this track that hears Cormega and INS speaking about being a survivor and being born with the skills to make it out of the hood.

4. This Is It
Produced by Dtox
Producer Dtox picks things up on this track with some lively production supplied for Deck who doesn’t worry about a chorus and goes strictly for bars. This is the type of track that INS excels on when he can just spit lyrics and show why few emcees can match up to his skills on the microphone.

5. Luv Letter
Featuring Fes Taylor & Ms. Whitney; Produced by Inspectah Deck
Things slow back down on this track, which happens to be Inspectah’s track for the ladies (which has basically become mandatory for Hip-Hop/Rap albums). Inspectah handles the production on this track, and while it fits the topic and mood of the song it doesn’t really catch my attention. Guest artist Fes Taylor delivers a decent voice, but he sounds a bit too much like Jim Jones for my liking (I mean one Jim Jones is quite enough in this game). The chorus from Ms. Whitney does its job but takes away from the track more than supplementing it. Overall this is just a decent track that could be skipped on.

6. P.S.A.
Produced by Lee Bannon
No this ain’t Jay-Z’s “Public Service Announcement” but it holds its own weight over Lee Bannon’s tough production. While it’s a short track at 1:44, Inspectah doesn’t waste any time delivering lyrics that hit just as hard as the beat with lines like “I’m wild like Clifton Powell/Grammar tight like Vanna White hands how I flip the vowels”. This track gets the album back on the right foot after the misstep with the previous track.

7. T.R.U.E.
Featuring Meshel; Produced by Inspectah Deck
This track finds Inspectah Deck back behind the boards with some funky sampled production that keeps the album moving in the right direction. Inspectah spits some truthful lyrics much alike to the song title speaking about his experiences in the hood while Meshel provides a much more effective chorus than what was heard on previously on “Luv Letter” by Ms. Whitney.

8. We Get Down
Produced by Inspectah Deck
Once again we find Deck handling the production duties on this track in a much more impressive fashion than his previous two beats. He delivers a Dr. Dre-esque beat that’s more than suitable for this track as he spits about how he and this crew hold it down. This is a very impressive track from INS, mostly displaying his quality production skills.

9. The Big Game
Featuring Raekwon & AC; Produced by Mental Instruments
With some synth driven production provided by Mental Instruments, Inspectah Deck attempts to create a track that sounds more suitable for today’s Hip-Hop/Rap than the years when INS ruled with the rest of the Clan. While Deck and guest Raekwon keep it thorough with their respective verses, the song just sounds out of place for an artist like Inspectah Deck especially with the processed (no Auto-Tune I assume) vocals on the chorus. If anything this track sounds more like a reach for INS just to state up to date with the sound and style projected as “popular” in the today’s rap game.

10. Tombstone Interlude
Produced by J. Glaze
Similar to the intro track, Inspectah Deck returns to the J. Glaze produced beat that serves as an interlude this time around. Much alike to the introduction track, Deck continues with an intense flow utilizing the multiple styles as previously heard. Really nothing more to this track than its intended purposes as an interlude.

11. 9th Chamber
Produced by Inspectah Deck & Khino
This track sees Inspectah Deck teaming up with Khino behind the boards to some intense production filled with hard-hitting drums and menacing strings that’s sure to get listeners’ heads nodding. Inspectah doesn’t hold back from ripping this track to shreds as he once again shows listeners what they’ve been missing in neglecting INS as an artist. The Nas sampled vocals on the hook say all that needs to be said about Deck as an artist and that work that he has put in over the years.

12. Really Real
Featuring Carlton Fisk & Fes Taylor; Produced by Inspectah Deck
On this piano and string driven beat produced by Deck, he gets back to the dark and sinister production that was heard earlier in the album. This track sees INS and Fes Taylor speaking about the realities and experiences of life. This is a solid track from Deck, one that I could have heard other artists like Jadakiss or Beanie Sigel featured on to give it more life.

13. Serious Rappin’
Featuring Termanology & Planet Asia; Produced by Mike Cash
I’m not too familiar with producer Mike Cash but I’m really impressed with the production he provides on this track. An epic feeling beat that hears Inspectah Deck along with Temanology and Planet Asia drop equally impressive verses that fit well with the song title. I don’t think one emcee outweighs the others on this track; they just combine for an impressive track.

14. Do What U Gotta
Produced by Flip
Producer Flip provides some smooth sampled production for INS on this track, as he speaks about doing what you have to do to survive in the streets. Deck gives his trademark prospective on the inner city life on this track that is very solid in the end.

15. Crazy
Produced by J. Glaze
Inspectah Deck displays his storytelling abilities on this track produced by J. Glaze, as he talks about the trials and tribulations of living in the streets, the current state of politics and government, and the other crazy things that we’re facing in the world today. This is the kind of reality rap that isn’t heard much in rap music today by mainstream rappers who seem to be limited when it comes to subject matter. INS effectively speaks on this issues and things that are currently affective his life and the people around him.

16. Gotta Bang
Featuring Kurupt & Billy Danze; Produced by Shorty 140
On this track Inspectah Deck hooks up with Kurupt and Billy Danze for some gun talk over some heavy production from Shorty 140. While the verses from each emcee match up with the song’s topic, it comes off as just a decent track compared to other tracks of the same topic that have been done better.

17. The Big Apple
Produced by K. Slack
From the title of this track you can already guess what it’s about, as Deck takes the time to deliver an ode to New York and the boroughs. While it’s not the ultimate song representing New York like “Empire State Of Mind”, INS does a quality job in his own regards.

18. Brothaz Respect
Featuring Cappadonna & Fes Taylor; Produced by Cee The Architect
Built off the Raekwon vocal sample, Cee The Architect produces a dark beat that matches the lyrics of Deck, Cappadonna, and Fes Taylor comfortably. This track sees them speaking about their street brothers and crews, with INS getting the upper hand with his verse over Cap and Fes. Overall this ends up being a solid track that fits the mood of the album.

19. 5 Star G
Produced by MoSS
Produced MoSS returns to the production duties with some funky production that sees Inspectah Deck speaking about his 5 star general status. If there had to be any track labeled as a “club track” this would be it, with Deck spittin’ about shorty in the club along with poppin’ bottles and stacks. Although this track sees INS speaking about some of the same things as the more mainstream rappers, he does it in a way better manner that’s more listenable.

20. The Neverending Story
Featuring Pleasant; Produced by Agallah
We finally reach the final track of a long playing album and Deck decides to end things off on a more reflective and deep note. Speaking about his life experiences and the things that he has had to endure to get to where he is in his life. This is always a good way to close out an album and INS does a nice job with the track.

Bottom Line:
Inspectah Deck returns to the rap scene with the feeling that he never left following a seven-year album hiatus. Manifesto is an effective return for Inspectah Deck (much like Only Built 4 Cuban Linx… Pt. II for Raekwon) as it shows that he still has the lyrical skill to be considered one of rap’s elite emcees and that his production skills are still up to par with the many other producers in the industry. 20 tracks is a bit of a stretch for a return album as the listening starts to become a bit much after a while. Luckily there are only a few tracks on this album that could have been left off the final product and they don’t bring down the overall quality. Manifesto is an album that will satisfy Inspectah Deck fans that have been waiting since 2003’s The Movement for a proper album and has the potential to garner some new supporters along the way. With this album Inspectah Deck shows why his name should be included with the more recognizable Wu-Tang Clan members because his dues have been paid in full.